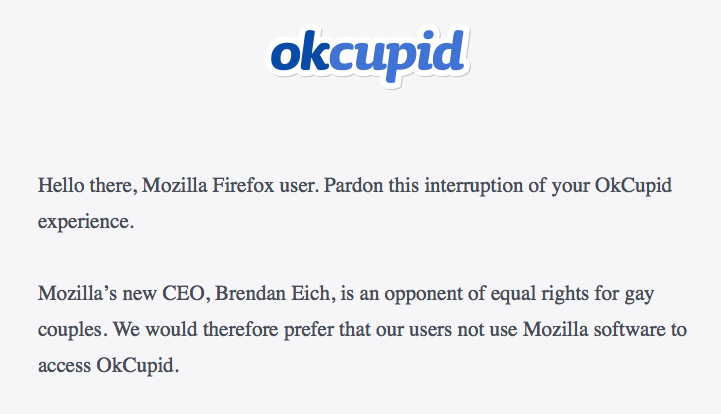 Dating site OKCupid took an aggressive step on Monday to make sure that its budding romantics who use Firefox knew exactly what the company thinks of Mozilla's new chief executive, co-founder Brendan Eich.

OKCupid co-founder Christian Rudder wrote, "Those who seek to deny love and instead enforce misery, shame, and frustration are our enemies, and we wish them nothing but failure."

However, instead of simply posting the letter on the company blog, Rudder made sure that every person who visited the site from Firefox saw the letter, by using the browser's User Agent to redirect them to the letter before allowing them to continue with their heart-felt intentions. Browsers have broadcasted their User Agent, which is basically the browser make and model, since the mid-1990s.

After Eich's ascension a week ago, word spread fast over Twitter that he had donated $1,000 to support California's Proposition 8 in 2008. The anti-gay marriage bill rescinded the right for gay couples to marry until it was overturned last year.

More than one Mozilla employee publicly called for his resignation on Twitter, and prominent app developer Rarebit detailed in two blog posts why they were withdrawing support from Firefox OS and what Mozilla and Eich need to do to regain their support.

"We thought that last week Mozilla would immediately come out with a statement of support of equality and Brendan would issue an apology," Hampton Catlin of Rarebit said in an email to CNET. "Unfortunately, this has become a far larger issue and I'm not sure there is a solution that would please everyone."

"Mozilla supports equality for all, including marriage equality for LGBT couples. No matter who you are or who you love, everyone deserves the same rights and to be treated equally," a spokesperson said, adding, "OKCupid never reached out to us to let us know of their intentions, nor to confirm facts."

The issue for many is one of whether a community-based nonprofit like Mozilla can allow somebody who financially supports discriminatory laws to be its leader. Mozilla derives around 85 percent of its funding from Google, which pays the organization for search traffic.

Google did not respond to a request for comment.

OKCupid's Rudder told CNET that Eich's actions affect his company's bottom line and its decision to make sure that Firefox users see the letter wasn't taken lightly. He said he wasn't sure when OKCupid would allow Firefox users to visit the site directly again.

"Firefox is 12 percent of our traffic. One out of eight people coming to our site are using a browser that's essentially being blocked," he said. The longer the situation continues, the harder a resolution that both sides agree on becomes. Rudder believes that Mozilla should appoint a new CEO, or Eich should explain why the situation is a "misunderstanding."

Technology forecaster, futurist, and longtime Silicon Valley observer Paul Saffo said that Eich's politics don't appear to have affected how he has interacted with Mozilla employees [as CTO] so far.

"This is a case where everyone loses. I can't imagine supporting Proposition 8. But at the same time, I have a hard time punishing someone who was exercising their Constitutionally-protected free speech," he said.

"When does protest cross the line into coercion that punishes others for the exercise of free speech? Does somebody deserve to lose their job for their position?"

In a statement on his blog last week, Eich wrote that he fully supports Mozilla's Community Participation Guidelines, its health benefits, and its anti-discrimination policies.

"I know some will be skeptical about this, and that words alone will not change anything. I can only ask for your support to have the time to 'show, not tell;' and in the meantime express my sorrow at having caused pain," he said. He did not, however, otherwise reject his previous support of Prop. 8.

Marc Andreessen, founder of Netscape, which later begat Mozilla, offered his support for Eich. "Brendan has been a friend for 20 years and I am a huge fan," he said in an email. However, when asked if he thought that calls for boycotting Mozilla were justified, Andreessen wrote only, "No comment."

Mozilla's board chair Mitchell Baker also published a statement on her blog last week supporting Eich. She wrote that she was "surprised" when she learned in 2012 of Eich's support of Prop. 8.

"I've never seen any indication of anything other than inclusiveness in our work together," she said.

Rudder made it clear that, at least for him, part of the OKCupid's actions were punitive. "I want all the proto-Eich's in the world to realize, don't do this. There should be shame involved in supporting things that are hurtful to other people. Those people should feel the shame that they make others feel," he said.

Catlin emphasized that to him and his husband, Rarebit designer Michael Lintorn Catlin, the issue is personal.

"We're really hoping for an apology that shows he understands and regrets the legal discrimination we faced under Prop. 8," Catlin said, emphasizing that they still believe in Mozilla's "primary mission" and that they want a positive resolution to the boycott.

"We aren't asking for him to approve of our relationship," Catlin said, "but are asking that he understand that actively supporting discriminatory laws was a mistake."

The situation was complicated even further by the resignations last week of three members of Mozilla's board. Mozilla released a statement saying that the resignations had been planned "for some time." However, the Wall Street Journal reported that they resigned in protest of Eich's appointment because they wanted the new honcho to be an outsider with more mobile experience than Eich.

Eich's future as Mozilla's new leader is uncertain, said Saffo. "Mozilla doesn't need the distractions of controversy when they're fighting for market share....[A]ny responsible CEO would be thinking about whether it's time to leave."

Stephen Shankland writes about a wide range of technology and products, but has a particular focus on browsers and digital photography. He joined CNET News in 1998 and has also covered Google, Yahoo, servers, supercomputing, Linux, other open-source software, and science. E-mail Stephen, follow him on Twitter at http://www.twitter.com/stshank, or contact him through Google Buzz.