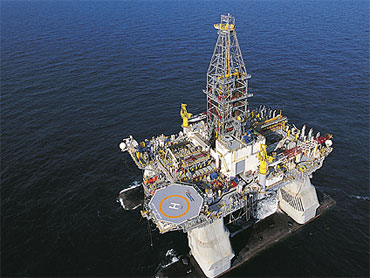 In the wake of the environmental disaster caused by the oil spill in the Gulf of Mexico, more lawmakers are starting to state for the record where they now stand on the issue of offshore drilling.

California Gov. Arnold Schwarzenegger on Monday became the first high-profile Republican to reverse course on the issue, saying the $100 million his cash-strapped state might gain from expanding oil drilling off the coast of Santa Barbara County isn't worth the risk of environmental catastrophe.

"You turn on the television and see this enormous disaster, you say to yourself, 'Why would we want to take on that kind of risk?"' he said.

Texas Republican Gov. Rick Perry, meanwhile, raised eyebrows when he suggested Monday the spill was an "act of God."

"From time to time, there are going to be things that occur that are acts of God that cannot be prevented," he said. "So until we know that, to make a judgment on this administration or any further activity may be a bit premature."

He added that he hopes "we don't see a knee-jerk reaction across this country that says we're going to shut down drilling in the Gulf of Mexico, because the cost to this country will be staggering."

Perry's staff later said the governor was not suggesting God caused the spill but rather that it was too early to assign blame to oil company BP, according to the Dallas Morning News. The governor later pointed to "mechanical failure" as the likely culprit.

Perry's comments somewhat echo those of Sarah Palin, who last week reaffirmed her support for drilling with a statement that she continues "to believe in it because increased domestic oil production will make us a more secure, prosperous, and peaceful nation." She later said she wants "our country to be able to trust the oil industry."

The two Republicans are trying to counteract a push from the left to move away from offshore drilling in the wake of the disaster. Liberal group MoveOn.org yesterday released an ad calling on the Obama administration to reinstate the ban on new offshore drilling.

The debate over drilling is particularly active in Virginia, where Republican Gov. Robert F. McDonnell continues to push aggressively for oil and gas drilling off the coast. President Obama ended the ban on drilling off the state's coast in March.

McDonnell "flew to Houston on Monday to tout the benefits of offshore drilling at an industry-sponsored conference," the Washington Post reports. "He told reporters before he left that he does not want to postpone drilling but to learn from the accident off Louisiana's coast."

Yet the state's two Democratic senators, who have supported drilling, are now calling for delays to ensure safety in the wake of the accident. So is the Republican mayor of Virginia Beach, Will Sessions, who had also backed drilling.

"It's alarming to me,'' Sessions said of the accident, according to the Post. "It gives me great concern."

Likely 2012 GOP presidential candidate and Minnesota Gov. Tim Pawlenty, meanwhile, offered some surprise praise for the Obama administration's handling of the crisis, telling ABC News that he thinks the government "is responding to the best of their abilities."

He added, however, that he didn't think it's "realistic or wise" to end the practice of offshore drilling.

"Almost 40 years have passed with an incident like that," he said. "I think there's certainly going to be lessons learned as a result of this tragedy, but I hope that they go to the issue of improving safeguards and improving technology and improving oversight, not trying to shut down drilling."