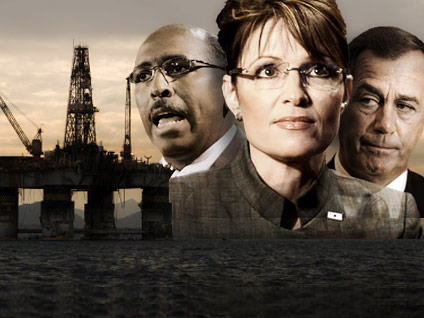 As massive amounts of oil continue to flow into the ocean from an exploded oil rig and ooze toward shore, Republicans and Democrats are grappling with how to address the issue of offshore drilling.

Some Republicans outside of Washington, like former Alaska Gov. Sarah Palin and Virginia Gov. Bob McDonnell, are carefully insisting the expansion of offshore drilling is in the nation's best interest.

Republicans inside the beltway, however, are lying low on the issue for fear of appearing insensitive to the disaster happening in the Gulf of Mexico. And while a handful of Democrats are calling on President Obama to halt his plans to consider more drilling, the president and some others in his party are still defending his proposal.

But the chant of "drill, baby, drill" was taken up by Palin, the 2008 GOP vice presidential candidate, and she maintains that she's holding onto it.

"I repeat the slogan 'drill here, drill now' not out of naivete or disregard for the tragic consequences of oil spills - my family and my state and I know firsthand those consequences," Palin wrote in a Facebook note today. "How could I still believe in drilling America's domestic supply of energy after having seen the devastation of the Exxon-Valdez spill? I continue to believe in it because increased domestic oil production will make us a more secure, prosperous, and peaceful nation."

Similarly, McDonnell said today that the "catastrophic event" off the Louisiana coast will not deter his plans to make Virginia the first state on the East Coast to begin drilling for oil and natural gas, the Washington Post reports.

"This is certainly a setback, but I certainly continue to be dedicated to making us first to drill, 2012 at the latest, and over the next couple years these safety and environmental issues will be addressed," McDonnell said.

In Congress, Republicans like House Minority John Boehner have yet to speak out about drilling. One House GOP leadership aide says that the party is staying quiet because they are wary about coming on too strong for drilling offshore while the ocean is still on fire, CBS News Capitol Hill Producer Jill Jackson reports.

The aide says, however, that Republicans will fully support the president's call for an investigation into the oil spill. Mr. Obama today promised a review of the disaster to come within a month.

In the coming days, according to the aide, the Republican party will renew its call for a comprehensive, all-inclusive energy policy that relies on everything from nuclear power and coal, as well as drilling. In the meantime, the aide points to remarks from Democratic Sen. Mary Landrieu, who on the Senate floor yesterday defended the practice of offshore drilling.

"I don't believe we can react in fear. I don't believe that we should retreat," Landrieu said yesterday, in a speech encompassing all aspects of the oil spill, including its impact on drilling. "We don't believe in burying our head in the sand and pretending that the country does not need 20 million barrels of oil a day, or pretending that we can get this energy tomorrow from somewhere else. We may get it somewhere else in 20 or 30 years, but not next week, and not the month after, and not the year after."

In his remarks today, Mr.Obama pointedly left the door open for future drilling.

"I continue to believe that domestic oil production is an important part of our overall strategy for energy security, but I've always said it must be done responsibly, for the safety of our workers and our environment," he said. "The local economies and livelihoods of the people of the Gulf Coast as well as the ecology of the region are at stake."

Some Democrats are asking the president to scale back his plans. In a letter sent to Mr. Obama yesterday, Florida Sen. Bill Nelson said he is drafting a bill to prohibit the Interior Department from going forward with the president's plans to open up the southern Atlantic coastline and some other areas to offshore drilling. Nelson also asked the president for an immediate halt to test wells and other exploratory operations in coastal waters.

White House Senior Adviser David Axelrod said this morning there will be no new drilling until there are answers about the oil spill, but he maintained that the president has yet to approve any new drilling anyway.

"All he has said is that he is not going to continue the moratorium," Axelrod said.

House Speaker Nancy Pelosi treaded lightly around the question of whether the president should reconsider his plans when questioned by reporters yesterday, Jill Jackson reports. She pointed out that the moratorium was first lifted under the Bush administration and that Mr. Obama was simply proposing some specific areas off the coast where drilling could be considered.

"I don't know how long it will take to seek the cause of this," Pelosi added. "I do know that what we have been told is that technology has changed, that there's much safer drilling than when we were first having these fights starting decades ago. Clearly, there is room for improvement, and I think the people who are affected in the area would want there to be some careful review."