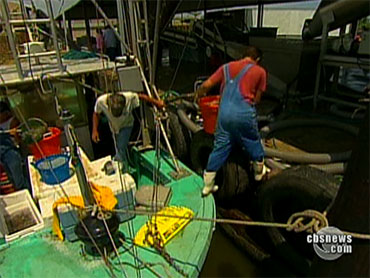 Monday night, the first statewide health survey in Louisiana tracking the health impact of oil spill shows more than 75 workers have been treated for symptoms.

Seven weeks into the oil spill crisis, there is still confusion and uncertainty about how to protect the people cleaning up the mess, reports CBS News medical correspondent Jennifer Ashton. Commercial fisherman George Jackson was overcome by fumes while inspecting boom; BP gave him no protective gear.

"They didn't supply us with nothing," says Jackson. "Now they're starting to disperse gloves and hazmat suits."

Chemicals and vapors, both from oil and dispersants, can pose serious health risks. They can inflame the nose, throat and lungs, and aggravate asthma.

When absorbed in the bloodstream, oil compounds like benzene or toluene can cause headaches and dizziness and could have long term toxic effects on the brain, liver and kidneys after prolonged, direct contact.

Another concern: the long, hot days for clean-up workers. The Occupational Safety and Health Administration demanded Monday that BP not overwork crews.

"We are very concerned about hours worked," says OSHA Assistant Secretary of Labor David Michaels. "Seeing ads on the internet for 14 hours, seven days a week. We raised this with the Coast Guard. We need to address number of hours working."

This afternoon in Venice, a boatload of shrimp came in, harvested from one of the few open fishing beds. But the stress is taking a toll. The state's mental health crisis center has fielded more than 400 calls.

"We moved into a FEMA trailer right here behind the house," he says.

The long term effects are unknown, so the state of Louisiana is setting up an extensive database to monitor these workers in the future.