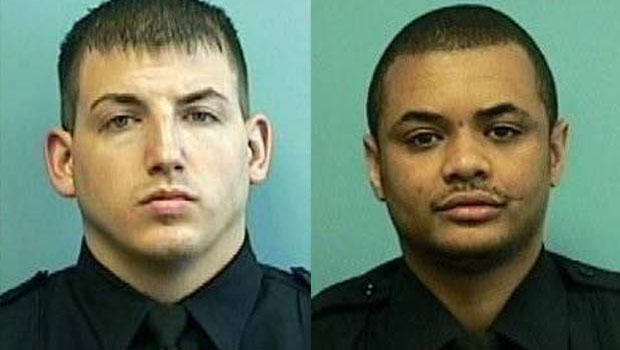 BALTIMORE — An indicted member of a disbanded Baltimore police unit allegedly duped a fellow officer into discovering a cache of heroin he planted in a car during a 2010 arrest, authorities alleged in a new indictment announced Thursday.

Police Commissioner Kevin Davis later identified the betrayed officer — dubbed "Officer No. 1" in the indictment — as Detective Sean Suiter, who was fatally shot in the head with his own gun just over two weeks ago while probing a triple homicide in a particularly rough West Baltimore neighborhood. He was killed the day before he was set to testify in an ongoing probe of the specialized gun recovery unit.

During a Thursday press conference, Davis told reporters that, back in 2010, Suiter was "set up" by indicted former officer Wayne Earl Jenkins to discover planted narcotics. He said Suiter was "not involved in any way, shape or form" in the deception.

Speaking of Jenkins, Davis said: "This guy was able to operate with impunity on this police department for far too long."

On Friday, Davis announced that he was asking the FBI to take over the investigation into the death of Det. Suiter.

"I am growing increasingly uncomfortable that my homicide detectives and I do not know all the facts," said the commissioner. He called the situation of a police officer homicide overlapping with a federal corruption probe "unusual."

"The community needs to know that I am willing to invite any sets of eyes or resources to look at this incident," said Davis.

Jenkins, 37, a former Baltimore police sergeant who is one of the indicted members of Baltimore's disbanded Gun Trace Task Force and a onetime supervisor of the squad, is one of eight Baltimore law enforcers being investigated by a federal grand jury.

The elite unit was tasked with getting illegal guns off the streets of Baltimore, but federal prosecutors say they used their position to detain people on false pretenses, steal their money, fake police reports, lie to investigators, and defraud their department.

If Thursday's indictment is proven, Jenkins also tricked a fellow officer into finding narcotics he planted himself and wrongly put two people behind bars for heroin possession charges.

A new five-count indictment announced Thursday by the acting U.S. attorney and Baltimore's FBI special-agent-in-charge alleges that on April 28, 2010, Jenkins was driving an unmarked police car with another officer dubbed "Officer No. 1," who Davis confirmed was Suiter. He allegedly told a third officer he was going to send Officer No. 1 to search a suspect's car because he was "clueless" that drugs had already been planted.

Umar Burley was convicted and sentenced to 15 years as a result of the 2010 arrest where 28 grams of heroin were found in 32 individual packets. Brent Matthews was sentenced to nearly four years. They both pleaded guilty despite knowing they were innocent, according to a statement from the Department of Justice.

"Both men concluded that in a trial involving Sergeant Jenkins' word against theirs, they would lose," the statement said.

The 2010 arrest also followed a chaotic high-speed chase that resulted in the death of an elderly man when Burley's car crashed.

Jenkins is currently detained awaiting a January trial on criminal racketeering and fraud charges. If convicted, he now faces an additional sentence of 20 years for the additional charges announced Thursday.

As he has done repeatedly in recent days, Baltimore's police commissioner stressed Thursday that Suiter was "never the target of an FBI investigation."

Rumors about Suiter's unsolved Nov. 15 shooting in a vacant lot went into overdrive last week when Davis confirmed that the acting U.S. attorney and FBI informed him that the detective was gunned down the day before he was expected to testify. According to CBS Baltimore, Davis said authorities have no reason to believe that his death was connected to that fact.

Police say he and his partner were in the rough Harlem Park neighborhood canvassing for information when Suiter approached a "suspicious" man in a vacant lot, leading to a violent confrontation in which he was shot with his own gun. His partner can be seen on private surveillance video taking cover across the street, according to Davis.

Suiter was found clutching his radio. A brief radio transmission indicated he was in distress and his clothes had signs of a "violent struggle," according to Davis. Suiter died at a hospital a day later.

The detective's murder is unsolved. There is a $215,000 reward for information leading to the shooter's arrest.

Suiter's funeral Wednesday drew thousands of mourners, shutting down major roads and bringing law enforcement officials from as far away as Chicago.

"There are all types of rumors going on in the streets, and I think that we need a very thorough investigation," Cummings said. "I told the director that we must follow the evidence wherever it may lead, and I want him to put a microscope on this investigation."

"The idea that Officer Suiter was murdered the night before he was supposed to provide federal grand jury testimony, a lot of people are concerned about that, and I got the impression listening to the head of the FBI that they are concerned about it, too," Cummings told the station.