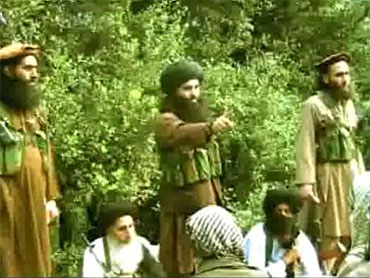 The only son of a leading Pakistani politician known for his outspoken criticism of Taliban militants was killed Saturday by suspected Taliban gunmen.

The killing came a day after a video of a leading Taliban warlord promising to strike at the hardline movement's opponents prompted widespread fear of suicide and armed attacks.

Mian Rashid Hussain, the 25-year-old son of Mian Iftikhar Hussain, the provincial information minister of the Taliban-infested province of Khyber-Pashtunkhwa, was killed in the northern city of Nowshera by unknown gunmen while he was out for a walk with a cousin.

A senior intelligence official in Peshawar, the provincial capital, told CBS News on condition of anonymity that the killing could be the first targeted attack since a video of Mullah Fazlullah, the former head of Taliban militants in Pakistan's northern Swat valley, promised revenge against Pakistan's civilian and military rulers.

"The investigation is looking especially at the angle of this killing being the first act of bloodshed under orders from Fazlullah," said the official. "The circumstantial evidence and information based on recent intelligence intercepts is exceptionally strong.

"This is increasingly looking like Fazlullah's fingerprints [are] all over the killing," added the official.

If such a connection between the killing and Fazlullah is established conclusively, that would mark a further deterioration in the already-sliding internal security conditions within Pakistan.

The intelligence official who spoke to CBS News from Peshawar warned that in the future Taliban militants could attack family members of other prominent public figures in a bid to unnerve key members of Pakistan's ruling structure.

Widely known as one of the most forceful critics of Taliban militants, Mian Iftikhar Hussain often disregarded advice from police and intelligence officials to make public appearances in which he condemned Taliban militants.

"I am asking my Fidayeen (suicide bombers) to target two kinds of people: the military and its supporters, and the nationalists and their leadership," Fazlullah was shown telling the militants standing around him.

Fazlullah went on to tell his assembled followers that Islam would even permit the accidental taking of innocent lives in the effort to slay the enemy.

The video, which showed Fazlullah walking with an unexplained limp, came after reports in May which suggested he had been killed.

After Saturday's attack, a senior Western diplomat in Islamabad who also spoke to CBS News on condition of anonymity warned that the attack could be followed by more attempts to target close family members of Pakistan's ruling elite.

"These people (Taliban) have no scruples. They are fighting for their survival. What could be a better way for these people to settle scores than to further terrorize ruling politicians by targeting people close to them," he said.