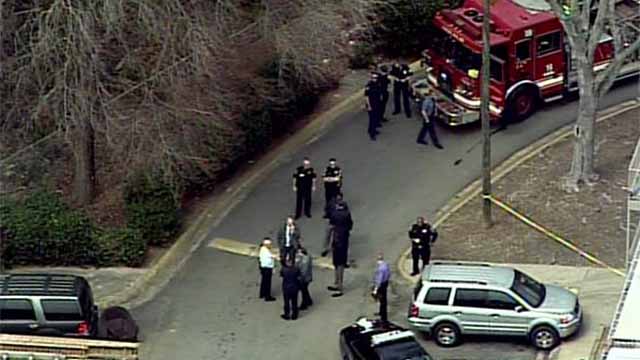 TUCKER, Ga. -- A police officer responding to reports Monday of a suspicious person fatally shot a naked man outside an Atlanta area apartment complex who doesn't appear to have been armed, authorities said.

The Georgia Bureau of Investigation has taken over the investigation, DeKalb County Chief of Police Cedric Alexander said at a news conference Monday afternoon.

The officer responded around 1 p.m. to an apartment complex after a report that a man had taken off all his clothes and was "acting deranged, knocking on doors and crawling around on the ground naked," Alexander said.

The officer saw a naked man in the complex parking lot, and the man began running toward the officer, he said. The officer told the man to stop while stepping back, and fired two shots when the man did not comply, he said. Witnesses told police that the officer unsuccessfully attempted to aid the man, Alexander said.

Neither individual's name was immediately released. Alexander said the officer has been with the department for seven years and is white. The deceased man is black, he said.

Alexander said he didn't have any information about the man's history with police or mental health.

A series of incidents involving white police officers killing unarmed black men over the past year has prompted discussion and protests nationwide. Alexander, who is black, acknowledged the national debate surrounding police shootings and said he wanted to ensure an investigation was transparent, open and fair to all involved.

"My decision quite frankly was made merely on the fact that there appeared there may have not been any weapon involved," he said. "So therefore, to dismiss any likelihood of any question of us investigating ourselves, it becomes important that we turn it over to an outside, independent investigation."

CBS affiliate WGCL reports that it appears police have some fence mending to do at the scene.

"Now you are scared to call police if you see anything because you don't know what police are going to do. They have license to kill people for no reason and that is scary," said Henry Raco.