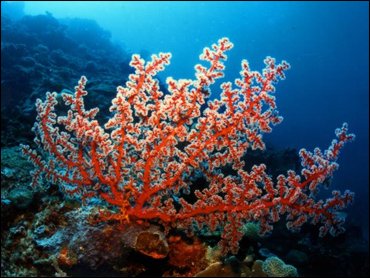 Undiscovered foods, useful chemicals and drugs, and potential sources of energy may lie in wait in the least explored portion of Earth - the oceans.

A new effort to seek out those resources was recommended Tuesday in a report by the National Research Council, an arm of the National Academy of Sciences.

"It is difficult to predict what discoveries are still to come," the panel said, but "it is clear that ocean exploration will improve the accuracy of our predictions of global climate change" and "produce new products that will benefit humanity."

Rep. Jim Greenwood, R-Pa., who pushed for the report, welcomed the findings.

The reasons for loss of coral, the impact of pollution and the potential damage from intense fishing all are poorly understood, Greenwood said. "The fact remains that the research that is most important in terms of our survival as a species is understanding the ocean," he said.

Greenwood said he hopes the White House will call a major conference on the oceans. Meanwhile, he said, the next step is to begin working on getting funding through Congress.

A large-scale effort would require an initial investment of about $270 million, calling for a dedicated research ship and a "modest" fleet of underwater vessels. Annual operating costs for the program would be about $110 million, according to the report.

More than 1,500 people have climbed Mount Everest, some 300 have journeyed into space, 12 have walked on the moon but only two - Jacques Piccard and Donald Walsh - have ever visited the deepest part of the ocean, noted the panel that prepared the study.

"The bottom of the ocean is the Earth's least explored frontier, and currently available submersibles - whether manned, remotely operated, or autonomous - cannot reach the deepest parts of the sea," said Shirley A. Pomponi, director of research at Harbor Branch Oceanographic Institution in Fort Pierce, Fla. And vice chairwoman of the committee that prepared the report.

Even without a major research program, new discoveries in ocean sciences are made every year, noted the report "Exploration of the Seas: Voyage Into the Unknown."

Recent finds include previously unknown species, such as organisms that consume methane seeping through the sea floor, converting it to energy for themselves and leaving hydrogen and carbon dioxide as byproducts. The hydrogen could perhaps someday be harnessed for fuel cells.

During one recent expedition off Australia and New Zealand, scientists exploring deep-sea volcanic mountains and abyssal plains collected 100 previously unidentified fish species and up to 300 new species of invertebrates.

The United States should lead the new program but bring in foreign researchers and funding to create an international effort, the panel urged. It suggested the National Oceanic and Atmospheric Administration as the logical government focus for the effort.

The report said key areas to focus on are:

The panel said the program should be operated by an outside contractor that can receive funding from a variety of agencies and outside sources.