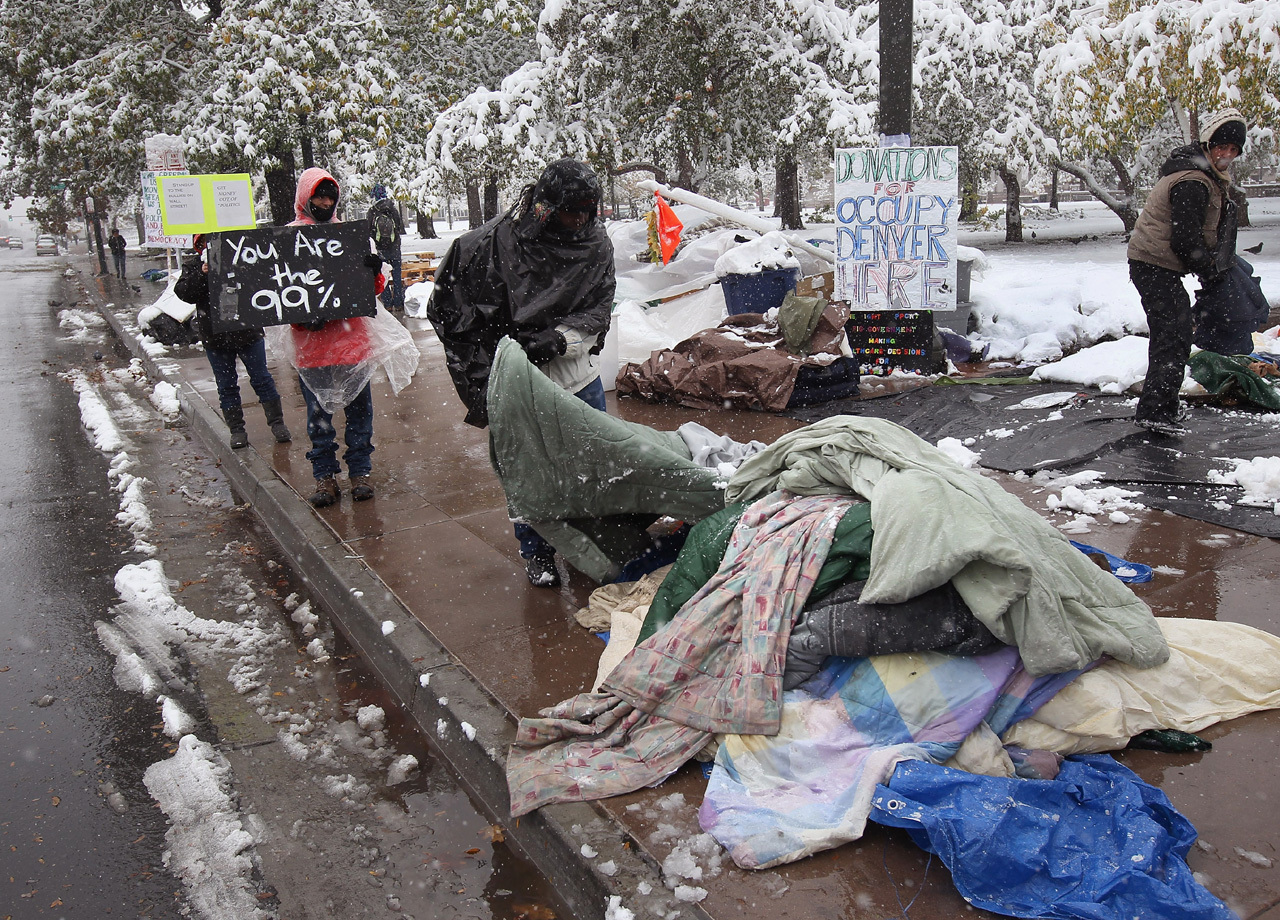 PROVIDENCE, R.I. - Anti-Wall Street protesters around the U.S. who are vowing to stand their ground against the police and politicians are also digging in against a different kind of adversary: cold weather.

With the temperature dropping, they are stockpiling donated coats, blankets and scarves, trying to secure cots and military-grade tents, and getting survival tips from the homeless people who have joined their encampments.

"Everyone's been calling it our Valley Forge moment," said Michael McCarthy, a former Navy medic in Providence. "Everybody thought that George Washington couldn't possibly survive in the Northeast." Valley Forge in Pennsylvania was the site of the Continental Army's winter camp during the Revolutionary War.

More than a month and a half into the movement, Occupy Wall Street activists from New York to Colorado have pledged to tough out the snow, sleet and cold as they protest economic inequality and what they call corporate greed.

But the dangers of staying outdoors in some of the country's harsher climes are already becoming apparent: In Denver, two protesters were hospitalized with hypothermia this week during a storm that brought several inches of snow.

The activists also know full well that the number of demonstrators is likely to drop as the weather gets colder.

Some movements are scouting locations indoors, including vacant buildings or other unused properties, possibly even foreclosed homes, though some question the wisdom of holding a protest outside the public eye.

Lighting campfires is probably out of the question in most places because of safety regulations.

Boston's Occupy movement, which has roughly 300 overnight participants and could face some of the most brutal weather of any city with a major encampment, has set up a winterization committee that will try to obtain super-insulated sleeping bags and other winter survival gear.

Activists from the movement's flagship encampment, consisting of hundreds of people in New York City's Zuccotti Park, are sorting through packages arriving daily that include coats and jackets.

In Providence, where city officials are threatening to go to court to evict hundreds of campers from a park across from City Hall, a core group said it will remain through the winter months — if not there, somewhere else. Rhode Island's capital has an average low temperature in the 20s from December through February and recorded nearly 3.5 feet of snow last year. Many of the more than 100 tents are not built to withstand harsh conditions.

Temperatures were expected to drop into the 30s across much of the Northeast by Friday morning, and forecasters said snow is possible in some places over the weekend. Boston got its first dusting late Thursday night.

In Denver (left), as protesters prepared for this week's snow, a few dozen sympathizers stopped by to drop off blankets, gloves, chili and hot chocolate. Police refused to let activists erect a tent. That left some sleeping on the wet ground, covered by snowy tarps.

"I welcome the challenge of this cold weather," said Dwayne Hudson, a landscaper who has been living at the Occupy Denver site for nearly two weeks. "This is like war. You know, soldiers do it when they occupy a place. I'm sure the mountains of Afghanistan get pretty cold."

But after the first snowfall, he admitted: "It's getting tough."

Eric Martin, who is on Occupy Boston's winterization committee, said the group had raised about $35,000, which could help buy winter supplies. Various ideas are being discussed to keep tents warm without using combustion-based heaters, which are forbidden. Another proposal: igloos.

"We're looking at ideas from military vets to survivalists, to the homeless community to indigenous peoples," Martin said.

Activists in Philadelphia are also researching sturdier, warmer structures that could replace the 300 to 400 tents set up on the concrete plaza surrounding City Hall.

Chris Goldstein of Riverside, New Jersey, owns one of the tents, though he sometimes sleeps at home. He learned the hard way during the first rainfall that the site has poor drainage: "I occupied a puddle." The self-employed writer and activist put pallets under the tent to lift it off the ground, and outfitted it with small carpets for insulation.

In the meantime, he and other activists have access to a Quaker community center two blocks away where they can shower and thaw out in common rooms.

In Chicago, where winters are famously bitter, protesters living in Grant Park are working to secure several indoor locations to get them through to spring. A church nearby is letting some demonstrators sleep overnight. Activists in Portland, Oregon, likewise said that moving the protest inside is the only realistic option.

Patricia Phelan and her fiancee, Savanah Kite, have been camping in the Providence park in a $20 tent from Walmart. As temperatures dipped into the 40s in the morning this week and people could see their breath, they hadn't yet employed their hand warmers or a down comforter Phelan had in the car just in case.

Their plan is to add layers as necessary.

The trick will be keeping morale up, Phelan said, "and not letting the climate get to us."