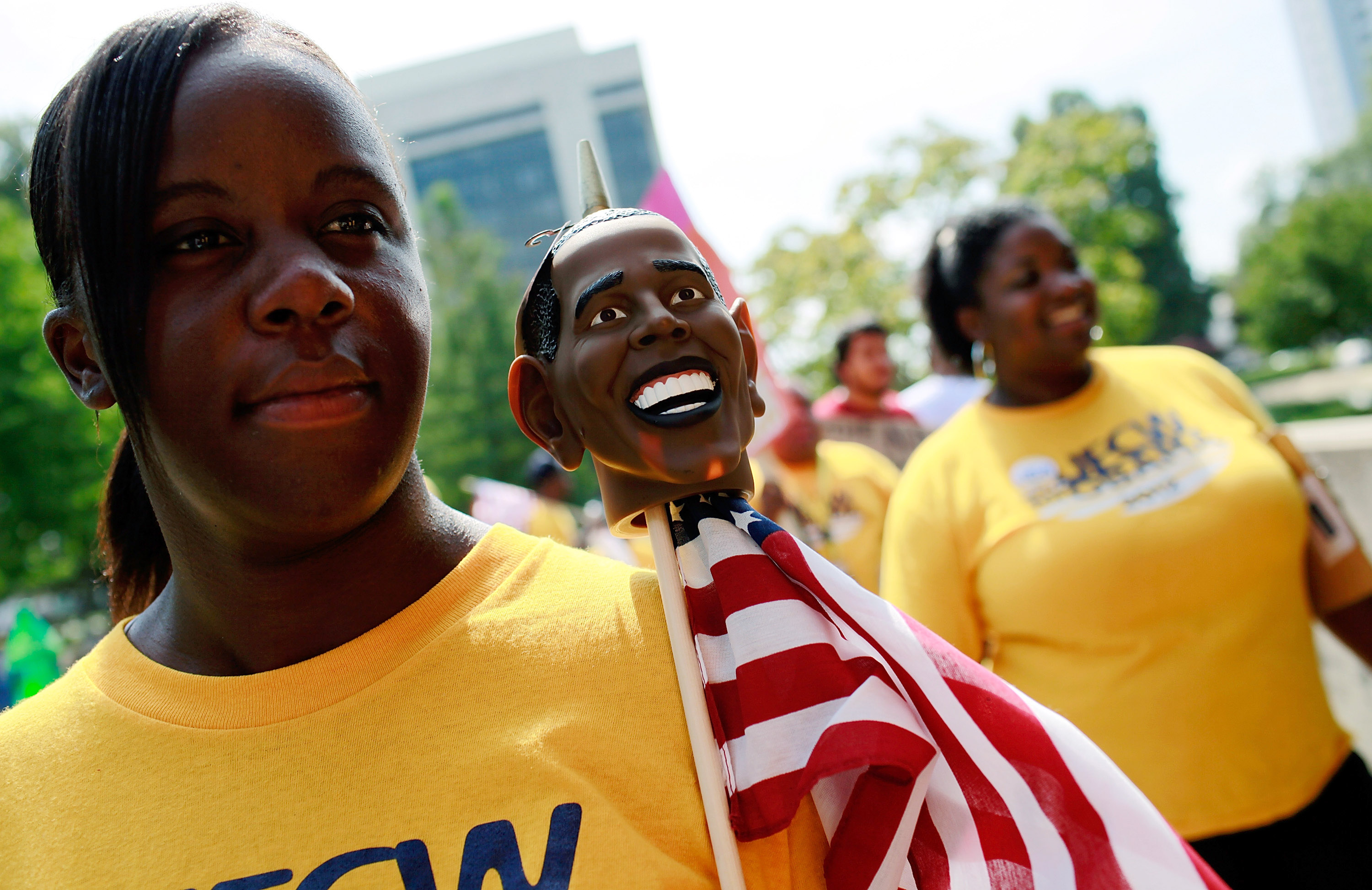 (CBS NEWS) RALEIGH, N.C. - Here at the African-American Cultural Festival, among the people listening to bands and drinking pina coladas out of pineapple shells, an Obama for America volunteer is trying his best to register voters.

The volunteer, a middle-aged black man in an Obama t-shirt, isn't explicitly telling people who to vote for. But he knows his audience: African-American voters turned out for President Obama in unprecedented numbers here in 2008, helping drive the president to an improbable and narrow victory in this southern state. (African-American turnout in North Carolina increased by 127,000 people between the 2004 and 2008 presidential elections; Mr. Obama won the state by just 14,000 votes, with 95 percent of the African-American vote.) North Carolina hadn't previously gone blue since 1976, and Democrats know that unless they can repeat their turnout coup from four years ago, the state will almost certainly flip back to red this year. That's why the Obama volunteer is here, and why Democrats have placed registration forms in barber shops across the state and engaged with supporters in black churches who can help in get-out-the-vote efforts.

The volunteer is calling out to passers-by with a big smile on his face, but few of them stop. Many of the people here, he says, are already registered. He asks a man walking past if he needs to fill out the form. The man grins and makes clear he doesn't: "You hurt my feelings," he says. A few steps away, Darian Smith of Raleigh tells a reporter he plans to vote. Asked who he's backing, he keeps his eyes on the band onstage. "The black guy," he says.

Yet even here, where Obama buttons and t-shirts are being sold alongside incense and African-American-themed art, there are reasons for the Obama campaign to worry. Most voters surveyed indicated that they plan to vote for the president, but the thrill of four years ago seems to have at least somewhat dissipated. Wyona Goodwin, an executive assistant at North Carolina State University, says she is "not as enthusiastic as in 2008, but optimistic."

Kelvin Johnson, who works for a beer distributor, says he remains enthusiastic but does not expect African-Americans to come out for Mr. Obama the way they did four years ago. "A lot of people are really not satisfied with the job he did," he said. It's not that people will vote for Romney, Johnson said. It's just that they won't vote.

Dawn Downey, a student, said she isn't sure who she'll vote for this year. She backed Mr. Obama in 2008, but this year feels like she is deciding between "the lesser of two evils."

"We knew coming in that Obama wasn't going to be able to clean up everything that Bush messed up, but I don't know, it's like, the state of things seem to be much worse, though I'm not sure if Romney is going to do much better," she said. Unemployment among African-Americans in the state stands at 19 percent.

Corey Branch, president of the National Pan-Hellenic Council of the Greater Raleigh Area - a coalition of African-American fraternities - is also here trying to register voters. He said he's had 25 or so registrants over the course of a few hours, mostly people who have changed addresses or turned 18 since the last election. "The overall energy right now is not as high as 2008," he said, "but the energy is there."

Software engineer Chris Mwarabu, who backed Mr. Obama four years ago, says he does not feel engaged with the process this time around. He says he's probably back the president, though - if he decides to vote.

"In 2008, I guess it - there was all this sense of hope, there was all this promise that things were going to be a lot different, and I mean, he's gotten in, he's been the president, but he really hasn't been as effective as I thought he would be," Mwarabu said. "He came in with a platform of bringing change, and to be quite honest, I really haven't seen the change."

"I probably would vote for him again, just because the other choice is - I'm not going to vote for Romney," Mwarabu continued. "I'm at the point where if I am to vote I'll vote for Obama. Or, if I wake up and I don't feel like going, I'm probably not going to go."

Democrats decided to hold their nominating convention in Charlotte earlier this month in part to send a signal: Even in this polarized political age, they are not giving up on the South. North Carolina is the most fully southern state the president won last year, and its importance to Democrats thus goes beyond its 15 electoral votes. (The two other states won the president that might be considered southern are Virginia and Florida. But his win in Virginia was powered by support in the Washington, D.C., suburbs in Northern Virginia, and the only area of Florida that is truly culturally southern is the panhandle in the northern part of the state.)

There are three pillars to Mr. Obama's base here. The first is African-Americans. The second is young voters from the region's many colleges, whom the Obama campaign has also been aggressively courting. At a coffee shop in Raleigh, a North Carolina State University sophomore named Josh Malchuk is studying with friends. This is the first election where he is eligible to vote, and he says he has yet to really tune in. Asked if he and his friends are excited about the election, he said no.

"Just because I don't know anyone that into politics," he said. "It's not something we talk about a lot or think about a lot."

The third pillar is the white-collar professionals who work in the high-tech research triangle of Raleigh, Durham and Chapel Hill, many of whom relocated to North Carolina from the northeast. This, along with the banking center of Charlotte, is what some call the "new" North Carolina. But while the old North Carolina has to some degree faded, with the textile and tobacco industries in decline, it has by no means disappeared. You can find it in places like Kannapolis - birthplace of Dale Earnhardt, Jr. - and Lexington, the barbeque capital where 75 percent of voters in May backed a ban on same-sex marriage. That ban passed by a wide margin, thanks in part to the support of the very African-American voters that Mr. Obama, who backs same-sex marriage, is counting on.

The question that will decide the state is which North Carolina more strongly comes out to vote: The old North Carolina, which breaks strongly for Romney, or the new one, which was energized by Mr. Obama's emergence onto the national stage four years ago. The demographic shifts in the state favor the president - there has been a 2.5 percent increase since 2008 in eligible black and Hispanic voters and a corresponding decrease in white voters, The Nation's Ari Berman reported, and a majority of voters who came to the state in 2010 moved from states that backed the president. But there is no guarantee that there will be enough enthusiasm to get these voters out to the polls.

"The fundamental thing that we're grappling with is in 2000 and 2004, Republicans had a 12-point advantage," said Wake Forest University political science professor John Dinan. "In 2008 we had a virtual tie. The question is to what extent we revert to historical trends."

There are signs to suggest that it will: In 2010, Republicans took over North Carolina's House and Senate as well as a Congressional seat. "Republicans here feel that they've got some momentum going," said Ferrel Guillory, a professor at the University of North Carolina and former journalist at the News & Observer in Raleigh. "And the economic conditions in the state are pretty shaky."

"The recession hurt a lot, and it hurt particularly in knocking down a lot of the remaining textile and furniture factories," he continued. "That was basically low-wage, low-skill work, but it was steady work. And it kept a lot of people in the middle class, or at least the lower middle class." Unemployment in North Carolina now stands at 9.6 percent, far above the national average; it's been above nine percent for Mr. Obama's entire term.

The difference between 2008 and 2010 is attributable in part to the size of the electorate: 4.2 million people voted four years ago, compared to just 2.8 million in the midterms. For the president's reelection campaign, the task is simple: "If the Obama campaign can get turnout back up to 2008 levels," Guillory said, "then he's competitive." Democrats used their convention to connect with voters who sought tickets to Mr. Obama's convention night speech (which was ultimately moved to a smaller indoor venue) and those who attended the "Carolinafest" event held before the convention began. With relatively few undecided voters up for grabs, first lady Michelle Obama will campaign this week in Greenville and Durham in what is mostly an effort to goose turnout.

Polling suggests Romney currently has a single digit lead in the state, making it the only battleground where he has a clear advantage. The Romney campaign is claiming that Mr. Obama is secretly giving up: In a recent memo, Romney pollster Neil Newhouse pointed to a decreased ad buy from the Obama campaign to argue that Team Obama is "is laying the groundwork for a stealth withdrawal." (It's likely North Carolinians wouldn't mind: the two campaigns have reportedly spent more than $50 million on television ads already.) The Obama campaign insists it's in the state to win and notes it has far more field offices in the state than Romney's campaign does.

Still, most observers agree that North Carolina is an uphill battle for the president, who is no longer the galvanizing figure he was four years ago, with the promises of hope and change having given way to an enduring, grim economic reality. Mwarabu, the software engineer considering sitting out the election, said he doesn't see how the outcome of the election will ultimately make any sort of real difference to him.

"It's one of those where, Romney wins, Obama wins, I think my life will be the same either way," he said.