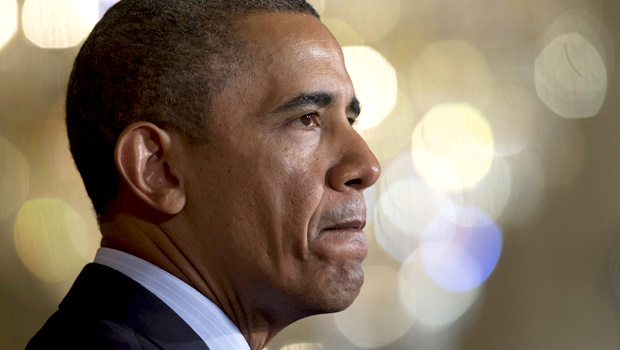 Obviously, Obama is not up for re-election, which raises the question: How important are approval ratings for his second term?

House Republicans aren't suddenly going to stop listening to him if his numbers decline. They're already ignoring him and not embracing his agenda.

In the elections of 2014, vulnerable Senate Democrats are competing in states where the president's approval rating has stunk for a long time. It won't be affected by a national drop; it can't go much lower.

In this constricted climate, Obama's falling approval ratings may be less important than for past presidents, except in one key area: implementing health care reform. It is the president's signature legislative achievement, but he needs to convince the public to sign up. To do that, he still needs them to trust him.

Presidential historians have long debated how much a president can persuade the public, even when his approval numbers are high. (These powers are more limited than popular perception holds.) Still, a president's public voice and ability to set the agenda are the best tools he has to shape domestic matters and help him sustain support for the foreign engagements he has the power to launch. But what if the politicians he needs to convince live in a separate political universe de-linked from the president? If so, his approval rating won't matter.

House Republican conservatives will determine whether immigration reform passes or whether a meaningful budget deal can be reached. Many of those House Republicans couldn't care less about the president's approval ratings: Their constituents dislike the president and are probably never going to change their mind. (That might change if Obama's approval rating was 65 percent, but that's not possible until the economy is booming.)

For this reason, on many issues, even if the president's approval rating were 5 points higher, it wouldn't matter. Partisanship has made any presidential connection toxic. When the president associates himself with an issue, it is more likely to turn Republicans against it and therefore decrease its chances of passing.

We're seeing this with immigration reform, where Obama has purposefully stayed in the background during Congressional negotiations at the advice of Republicans who say if he campaigns for the measure, he will make it harder for them to pass the bill. (Immigration reform will pass only if Republicans believe that it is in their self-interest, which has little to do with Obama's popularity.)

As a political matter, the president's approval rating should matter for Democrats up for re-election in 2014. If Obama is unpopular, the thinking goes, he will drag House and Senate Democrats down. We saw this with President Bush in 2006, where Democrats picked up five seats in the Senate and 30 seats in the House. As John Sides points out, the share of seats controlled by the president's party depends in part on presidential approval.

But Democrats are already facing a grim landscape next year. The nine most vulnerable seats are either held by a Democrat or are open seats where a Democrat is retiring. In states like Montana, Arkansas, Alaska, Louisiana, West Virginia, and North Carolina, the president's approval ratings are already so low that the decline in his national standing isn't going to change things much. In some key Midwestern contests like Iowa, Michigan, and Minnesota, however, the president's weakness could matter.

In the House, there are nine toss-up races, according to the Cook Political Report. Eight of them are Democratic seats; life for these candidates will get harder as Obama becomes more of an albatross. The one Republican in a toss-up district gets to breathe easier because his opponent is busy trying to enliven discouraged Democrats and define himself as distinct from Obama. The GOP candidate's strategy gets easier, too, the more trouble the president gets in. He simply ties his opponent to the man at the top. This phenomenon also holds for those seats in the next category of competition--the 11 seats that are leaning toward the Democrat and the 10 leaning toward the Republican.

For all Democratic candidates, the president's approval rating slide also creates daily press headaches. They don't have to just manage the association with the unpopular politician, they have to answer for whatever policies are making the president unpopular. What do you think about the NSA, IRS, and Benghazi? To distance themselves from an unpopular president, candidates may feel compelled to call for special prosecutors or the production of records, which only breathes more life into an already bad news cycle.

According to members of the Bush and Clinton years, low approval ratings act like gravel on the road, making everything bumpier.

"Members of Congress use approval ratings when determining if they should or should not support the president's agenda," says Dan Bartlett, former counselor to George W. Bush. "The lower the number, the more political freedom they believe they have."

Mark Penn, who was Bill Clinton's pollster and top strategist during his re-election and second term makes a similar point about the "Rule of 50." "The Rule of 50 is the minute [your approval rating] falls below 50, everybody piles on you and before you know it you're at 38, 35, because it becomes to the political advantage for everyone to whack you," he said recently. "And the minute you're above 50, everybody has to think twice about whacking you, and so you can actually build capital up."

Matthew Dowd, George W. Bush's former pollster, says Obama is facing the kind of permanent break that Bush faced in his second term. It's not just that Obama's approval ratings are down that's a problem, says Dowd, the important point is that people see him as less honest and trustworthy than they once did after the spate of recent controversies. "Once you lose 'honest and trustworthy' and credibility, which is also what happened to George Bush, people start to say, 'I don't trust this guy on anything.' Once your gut connection on values cracks, there's no getting it back. ... My guess is that wherever Obama's number settles, barring some big external event, it won't get above that."

Preliminary evidence suggests that people are no longer giving the president the benefit of the doubt. In a CNN poll last month, only 37 percent of the public thought that the IRS controversy led to the White House, now 47 percent think it does. If people had more faith in the president's honesty, perhaps they would instinctively assume he's blameless, thinking he could never do such a thing.

Health care may be the issue where the president's slide in the polls matters the most. The Affordable Care Act is the president's signature legislative achievement and its implementation is the president's No. 1 priority for his second term, according to aides. The administration and the president's political arm, Organizing for America, are engaged in a monthslong effort to encourage voters to sign up for the program. Senior Democratic senators have encouraged the White House to use the president more in this effort. If his standing with the public is diminished, it will make that hard sell harder. If younger voters don't sign up, costs might balloon as only the chronically ill join the program.

It has become a feature of the modern presidency that every second-term president has to defend against a crisis born in their first term. This hampers his ability to achieve new things. For President Obama, the risk of low approval ratings is that they may diminish his ability to protect what he has already achieved.