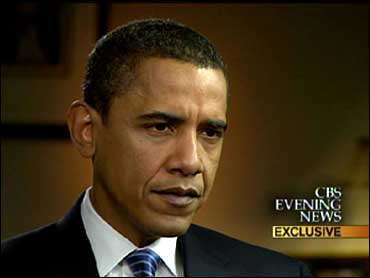 Not quite the president yet and Barack Obama is looking for his first legislative victory.

A wary Senate is scheduled to vote Thursday on Obama's request for $350 billion in financial bailout money - the first installment of his economic recovery plan.

When President Bush asked for the $700 billion Troubled Asset Relief Program (TARP) last fall, he won it in part because his economic advisers painted a doomsday economic scenario.

If Obama wins the release of the second half of that fund Thursday, it will be in part because Bush's economic advisers aren't making the pitch again.

Instead, it is Obama's economic team that has fanned out across the Capitol. Their lobbying effort culminated in a closed-door meeting Wednesday between Senate Republicans, top Obama economic adviser Larry Summers and incoming White House chief of staff Rahm Emanuel.

Summers and Emanuel offered assurances that the money from TARP would be spent differently than it was under President Bush.

The lawmakers who met with Obama's emissaries said after the discussions that Obama would spend the remaining $350 billion of the financial bailout fund on expanded lending and reducing foreclosures, and would not use the money to help other industries.

More than 2.3 million American homeowners faced foreclosure proceedings last year, an 81 percent increase from 2007, with the worst yet to come as consumers grapple with layoffs, shrinking investment portfolios and falling home prices.

Indeed, even though most Republicans will still vote against the bailout funds, Obama is getting the kind of hearing that Bush probably would not have.

Republicans and Democrats have been loud critics of Bush's handling of the first half of the fund, most of which was used to provide liquidity to banks with few strings attached. Republicans have also fretted about the use the bailout for nonfinancial industries.

The $350 billion comes on top of Obama's demand for an economic stimulus package that has grown to about $850 billion. A vote on the stimulus could come by mid-February.

When asked in an exclusive interview with CBS Evening News Anchor Katie Couric whether his stimulus package would be successful, Obama said, "failure is never an option. Not in America."

Couric asked Obama how he would overcome lawmakers' concerns that Americans would not turn around and spend money saved by Obama's proposed tax cuts, which constitute 40 percent of his proposal.

"Are some people gonna just pay down their credit cards or save some of that money? Absolutely. And if Congress has better suggestions where they can show me that one approach is gonna be better than another approach, I'm happy to take it," he said.

Altogether, Congress could give the new president a whopping $1.2 trillion to spend before he's had a chance to change a single White House drape.

Under safeguards adopted by Congress when it passed the bailout bill in October, the House and Senate can reject a request to spend the second $350 billion in the fund. The Senate will vote on a motion to disapprove the request. If a majority votes no, Obama will win access to the money.

If a majority votes yes, Obama will have to await a vote in the House next week. If the House also votes to not release the money, his only option is to issue a veto. Obama has warned that he is prepared to do that, but it would be a remarkably awkward first act for a Democratic president to rebuff a Democratically controlled Congress.

Summers and Emanuel's mission on Capitol Hill last night was meant to avoid that.

The private guarantees went further than what Obama's team has been willing to discuss publicly about his plans for the funds. In their closed meeting with Summers and Emanuel, Republicans demanded that the incoming Obama administration put in writing details of the conditions and goals for the money.

"There is a real concern that it's one thing to say it in the privacy of that room; it's another thing entirely to put something on the record," said Democrat Sen. John Thune.

McConnell said Summers and Rahm "did not represent they are in favor of industrial policy" - a reference to bailout funds use to help insurers and automakers.

"We'd like to see something publicly stated with reference to that issue," he added.

In the House, Financial Services Committee Chairman Barney Frank, a Democrat, said Summers assured him that Obama would commit a significant portion of the bailout money to foreclosure relief.

The House on Thursday was scheduled to vote on Frank legislation that would place broad restrictions on the bailout program. One major provision would require that the new administration spend between $40 billion and $100 billion on reducing the number of foreclosures.

"I believe they would have done this anyway," Frank said after speaking to Summers on Wednesday.