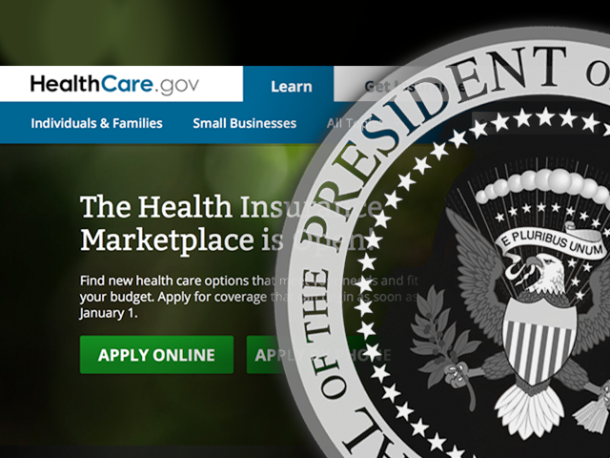 WASHINGTON - Back on track after a stumbling start, President Barack Obama's health care overhaul reached a milestone Thursday, with more than 6 million Americans signed up for coverage through new insurance markets.

The announcement - four days before open enrollment season ends Monday - fulfills a revised goal set by the Congressional Budget Office and embraced by the White House.

Like much else about Obama's health care law, it comes with a caveat: The administration has yet to announce how many consumers actually closed the deal by paying their first month's premium. Some independent estimates are that as many as 10 percent to 20 percent have not paid, which would bring the total enrollment to between 5 million and 6 million people.

The White House said the president made the announcement during an international conference call with enrollment counselors and volunteers, while traveling in Italy. Administration officials, focused on signing up even more people over the weekend, played down the occasion. Others said it was unmistakably a promising sign.

"I think the program is finally starting to hit its stride in terms of reaching the enrollment goals the administration set," said John Rother, CEO of the National Coalition on Health Care, a nonpartisan coalition of businesses, health care industry groups and consumer organizations. "It still has a ways to go in terms of achieving public acceptance."

To put the 6 million sign-ups in perspective, consider that the HealthCare.gov website didn't work when it was launched in October. Millions of people trying to access online marketplace exchanges that offer subsidized private insurance were met with frozen screens. Nonetheless, the administration's achievement is still short of the original target of covering 7 million people through the exchanges.

Several million more people have gained coverage through Medicaid. That safety net program was also expanded under the law, but only about half of states have gone along.

Nonetheless, ongoing measurements by Gallup show that the number of Americans without coverage has been slowly dropping since coverage under the law took effect in January.

Monday is the deadline to enroll in the new insurance exchanges, but potentially millions of people will still be able to take advantage of extensions announced this week.

Although the national number is important, what really counts is state-by-state enrollment. That's because each state is a separate insurance market. To help keep premium increases in check, each state market must have a balance between young and old, healthy and sick.

"The national number only gets us so far," said Caroline Pearson, who is tracking the rollout for the market analysis firm Avalere Health. "The fair measure of success is whether you have set up a market that is sustainable into the future. So you can then go out and find the rest of the uninsured people, and bring them in over the next couple of years."

As of just a couple of few weeks ago, it seemed like it would take a miracle of sorts for the administration to hit the 6 million mark. Enrollment in February was lackluster. But this week especially has seen a resurgence of consumer interest with the enrollment deadline approaching. The administration said HealthCare.gov got 1.5 million visits on Wednesday.

Health and Human Services Secretary Kathleen Sebelius has been traveling constantly to promote sign-ups. Obama himself joined in reaching out to Hispanics, a large and relatively young population that has been sitting on the sidelines.

Achieving the 6 million level was a relief to congressional Democrats. The law remains unpopular with the public, and Republicans are making its repeal their rallying cry in the upcoming midterm elections.

"The Affordable Care Act is working," House Democratic leader Nancy Pelosi of California said in a statement. "Republicans should abandon their reckless pursuit of new milestones in the number of votes to repeal or undermine this historic law."

The GOP-led House has voted more than 50 times to repeal, defund or scale back the law.

Celebrations are premature, suggested market analyst Pearson, who cited the uncertainty over how many people have actually secured coverage by paying their premiums.

"It matters politically," she said. "It doesn't matter from a market perspective."