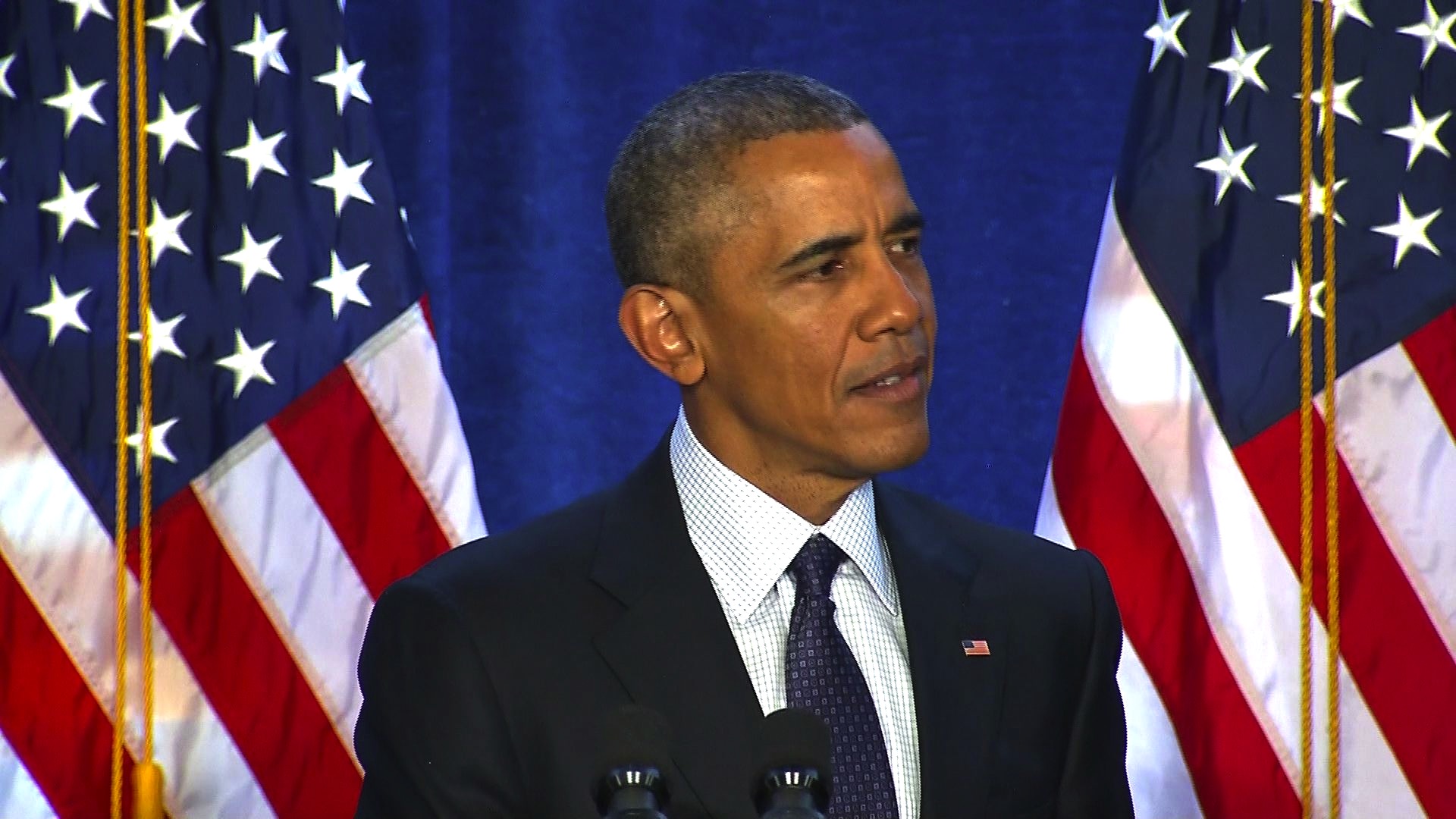 BALTIMORE -- Addressing House Democrats at their annual retreat in Baltimore, President Obama predicted that the party will continue to hold the White House after this year's general election.

"Democrats will win in November," Mr. Obama said Thursday evening. "And we will have a Democratic president succeeding me -- just in case there's any confusion about that."

Continuing to weigh in on 2016, the president also slammed recent Republican talk of America's progress during the primary campaign season.

"There's a lot of noise and a lot of talk about America in decline," he said. "I don't believe it and the facts don't show it."

Earlier in the evening, House Democrats presented Obama with a bowl inscribed with the words "We've got your back."

Vice President Joe Biden, who spoke at the Democratic retreat early on Thursday, likened the Republican presidential race to a "gift from the Lord" for Democrats trying to win control of the House and Senate.

Biden joked to House Democrats that he doesn't know which Republican to root for, though he didn't refer to any by name. Many Republicans are worried that front-runner Donald Trump or Texas Sen. Ted Cruz could be a drag on other Republicans on the ballot in a general election.

Democrats say a Trump or Cruz candidacy could be a windfall in their uphill battle to regain control of the House, where their numbers are the lowest since the Truman administration in the late 1940s.

"And by the way, we may be given a gift from the Lord in the presidential race here. I don't know who to root for more," Biden told House Democrats.

The vice president, who considered and then decided against another presidential bid, urged Democrats to run on the accomplishments of the Obama administration, citing the improving economy and gains against Islamic State radicals, as well as proposals for free community college and increasing a tax credit for child care costs.

"The best way to win is to run on what we've done and what we're for," Biden said. "And we should point out what they're for."

Democrats would need to gain 30 seats in this November's elections to capture a House majority. Republicans currently outnumber them 247-188, a number that includes a vacant GOP district in Ohio that the party seems certain to retain.

Yet analysts agree Democrats have no real chance of winning control because only two to three dozen House seats are considered in play this fall, thanks to computer-drawn district lines that protect most incumbents.

The prospects are better in the Senate, where Democrats need to gain four seats if the party holds the White House. Republicans have more seats to defend, 24 to the Democrats' 10, and many of those GOP seats are in states President Barack Obama won, including Illinois, Wisconsin, Pennsylvania and Ohio.

Biden said the fight against ISIS is going better than is commonly appreciated. He predicted rebels would be defeated in Raqqa, Syria and Mosul, Iraq this year, mirroring recent gains in Ramadi, Iraq. He said part of the reason is that Obama got European allies "to pony up."

"The idea that they're gaining and not losing is just not accurate," Biden said.

On the political front, Democratic Leader Nancy Pelosi of California announced Thursday that she raised $40 million for House Democrats last year, including $30.4 million for the campaign committee. A prodigious fundraiser, Pelosi held 205 fundraisers in 35 cities.

Pelosi became a member of the Democratic leadership in 2002 and since then, has raised $468.9 million for Democrats.