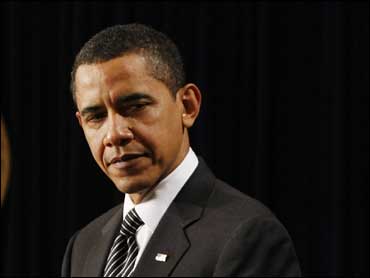 (AP)
Saying that "necessity is the mother of invention," President Obama this afternoon told a group of energy entrepreneurs that their ideas can help the country weather the economic downturn.

The president lauded companies that produce energy-efficient windows, reliable solar technology, and microchips and batteries for hybrid cars. And he said that there are jobs to be had through the pursuit of green technology projects.

Mr. Obama spent much of the speech on his ambitious, $3.6 trillion budget proposal, which includes a $150 billion investment in renewable energy over ten years. He said he is seeking to make the research and experimentation tax credit permanent as part of the budget and added that he wants to reduce to zero the capital gains tax for investment in small businesses.

The president also said that the administration "will be pursuing comprehensive legislation to finally end our addiction to foreign oil and to prevent the worst consequences of climate change while creating the incentives to finally make clean energy the profitable kind of energy in America."

UPDATE: President Obama's full remarks, as provided by the White House, are below.

President Obama: Thank you, Paul, for talking about the work that you're doing at Serious Materials. And thank you, Susan, for describing the research that's taking place under your leadership at MIT. I have to say that Susan made sure to tell me not to touch anything on the table. (Laughter.) I was going to do some experiments for you today -- (laughter) -- but we decided not to.

Finally, I'd like to thank everyone who's here for joining us this afternoon. And I want to introduce a few people on our team that are critical to this effort. As was already mentioned John Holdren, has now been confirmed our White House Office of Science and Technology Policy. (Applause.) Carol Browner is here, assistant to me for Energy and Climate Change. (Applause.) And behind her is Nancy Sutley, who is the Chair of the White House Council on Environmental Quality. (Applause.)

So thanks to them, thanks to all of you for coming. Welcome to the White House.

We gather at a challenging time for our country. We face an economic crisis unlike any we've known in a generation. We've lost 4.4 million jobs since this recession began. Millions of families are at risk of losing their homes, and tens of millions more have lost value in their homes. Our financial system has been severely undermined by the collapse of a credit bubble that was -- is as irresponsible as it was unsustainable.

Now, many of you in this room, I know, are experiencing this crisis in one way or another. Perhaps you've won fewer investors than you'd hoped, or you've earned lower revenues than you expected; perhaps your share price has fallen, or the cost of securing a loan has risen.

But you're also helping us to overcome this crisis. Paul's company, Serious Materials, just reopened, as he mentioned, a manufacturing plant outside of Pittsburgh. Last year, that factory was shuttered and more than one hundred jobs were lost. The town was devastated.

Today, that factory is whirring back to life, and Serious Materials is rehiring the folks who lost their jobs. And these workers will now have a new mission: producing some of the most energy-efficient windows in the world.

We've got other examples in this room. Deepika Singh -- where is Deepika, is she here? There you are, right there. Deepika is here from Gainesville, Florida. She's the founder and president of Sinmat -- did I pronounce that correctly? -- that's developing new ways to manufacture microchips that can help power smarter energy systems, from more fuel-efficient hybrid cars to more responsive, efficient lighting for homes and businesses.

So these are the stories that are being told all across our country. I remember during the campaign I visited McKinstry Company in Seattle, which is retrofitting schools and businesses to make them more energy efficient. McKinstry is expanding and expects to hire as many as 500 new workers in the next few years.

I visited another company, PV Powered, a company developing more reliable solar technology in Bend, Oregon. And then there was Bombard Electric in Las Vegas which is building up Nevada's renewable energy capacity.

And just last week I visited the Electric Vehicle Technical Center in Pomona, California, which is testing batteries to power a new generation of plug-in hybrids that will help end our dependence on foreign oil. I have to say, Susan, the battery I saw was bigger than that one that's on the desk -- (laughter) -- but that may be the direction we're moving.

My administration has begun implementing the American Recovery and Reinvestment Act, which will create or save 3.5 million jobs -- and 90 percent of those will be in the private sector. Through $59 billion invested in clean energy and in tax incentives to promote clean energy, the Recovery Act is estimated to create more than 300,000 jobs.

And these are jobs that will be created as we double our country's supply of renewable energy and make the largest investment in basic research funding in American history. These are jobs developing new batteries to power the next generation of plug-in hybrid cars, like those being tested at the facility I visited in California last week. These are jobs upgrading our power grid, so that it can carry renewable energy from the far-flung places that -- where it's produced to the cities that use it.

And these are jobs that will be created through today's announced $1.2 billion for research through the Department of Energy's national labs. As we speak, my Secretary of Energy, Steven Chu, is visiting Brookhaven National Laboratory on Long Island, where recovery funds will speed construction of a laboratory that will help develop materials for new solar cells and other clean energy technologies.

Through this plan, we have achieved more in two months in support of a new, clean energy economy than we've achieved in perhaps 30 years. And the budget I've proposed builds on this foundation. The budget is a comprehensive strategy to grow this economy. We will attack the problems that have held us back for too long: the high cost of health care, the budget deficit, our broken education system, and our energy dependence.

We have a choice. We can choose to do what we've done. We can leave these problems for the next budget or the next administration, but more likely for the next generation.

We know the right choice. We have known the right choice for a generation. The time has come to make that choice, to act on what we know. And that's why my budget makes a historic investment: $150 billion over 10 years in clean energy and energy efficiency, building on what we've achieved through the Recovery Plan.

Yet over the years we've allowed this credit to lapse or we've extended it year to year -- even just a few months at a time. Under my budget, this tax credit will no longer fall prey to the whims of politics and partisanship. It will be far more effective when businesses like yours can count on it, when you've got some stability and reliability.

I've also proposed reducing to zero the capital gains tax for investments in small or startup businesses -- expanding and making permanent one of the tax cuts in the recovery plan. And federal agencies will continue to set aside a portion of R&D budgets for small businesses, because small businesses are innovative businesses, producing 13 times more patents per employee than large companies.

Finally, building on the Recovery Plan my administration is implementing and the budget I have proposed, we will be pursuing comprehensive legislation to finally end our addiction to foreign oil and prevent the worst consequences of climate change, while creating the incentives to finally make clean energy the profitable kind of energy in America.

And we know how much promise this holds. Orion Energy Systems is a perfect example, which Neal Verfuerth -- did I say that, Neal, properly?

THE PRESIDENT: Is that you right there?

THE PRESIDENT: Okay. Neal just spoke to you about this. Orion employs more than 250 people providing energy-saving lighting to Fortune 500 companies. And it recently began work on a new 70,000 square foot office and technology center.

Long before this success, Neal had tried his hands at clean energy. He bought two solar panel distributorships. But the manufacturing companies he depended on went under. Years later, he started Orion as a distributor for lighting systems, growing with the help of loans through the Small Business Administration.

Then, about 10 years ago, he had an idea. It was in the middle of the night, but Neal hopped in his car and drove to a factory in Plymouth. This was one of those moments when the future refused to wait until morning. (Laughter.) He grabbed two-by-fours and a broom handle. He tinkered until somebody else arrived. He had finally figured out a design for a new lighting fixture that made it possible to produce twice the light using half the energy.

But as Neal will tell you, this is when the real work began: seeking capital; seeking customers; seeking the support that would allow him to test and improve and perfect what he had designed. And that took time, and that took patience, and it took creativity.

Progress is rarely easy, and I know people in this room understand that. Sometimes it takes months to learn that your ideas just won't work -– or years to learn that it will. Sometimes the funding dries up or the investors walk away. Sometimes you have to fail before you can succeed.

So all of you, you are helping us to build a cleaner, brighter future, and a stronger, more prosperous economy. And my administration and our country will support you in that difficult work.

By the way, I was just thinking about it -- I suspect this is Orion as opposed to "Orion," but -- (laughter) -- the way it was written up, I just wanted to make sure while I was giving you a plug that -- (laughter) -- that we got the right plug. All right -- it's Orion. All right. Thank you, guys. (Applause.)