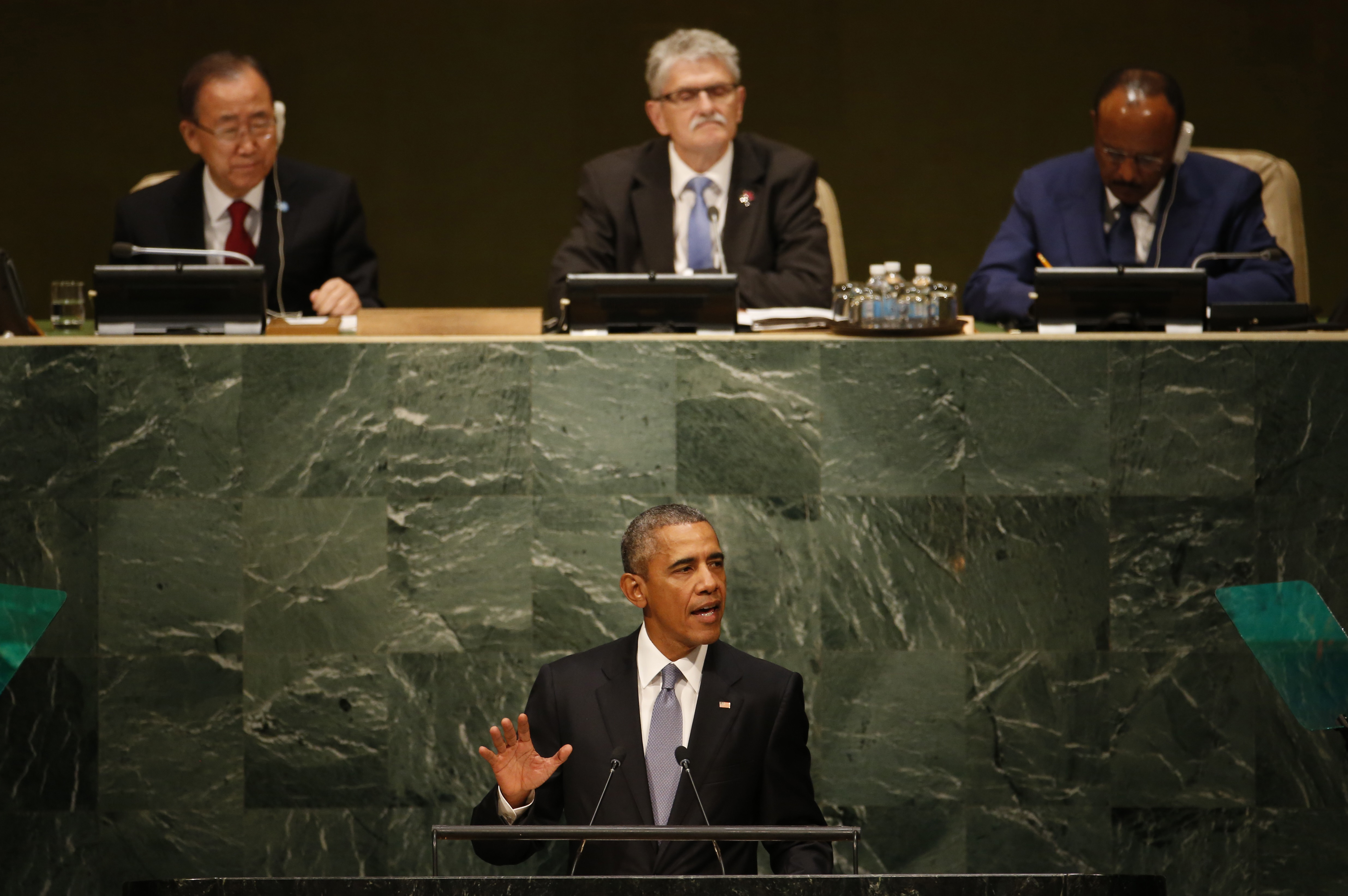 President Obama argued for a return to diplomacy and condemned leaders who abandon democratic principles in an effort to control their populations Monday, paying special attention to Syrian President Bashar al-Assad.

"We're told that such retrenchment is required to beat back disorder, that it's the only way to stamp out terrorism or prevent foreign meddling," Mr. Obama said in a speech to the United Nations General Assembly. But he rejected this theory, saying, "In accordance with this logic, we should support tyrants like Bashar al-Assad who drops barrel bombs to massacre innocent children because the alternative is surely worse."

The speech served in part as a rebuttal to Russian President Vladimir Putin, who Mr. Obama will meet face-to-face later Monday for the first time in more than a year. In addition to Ukraine, the two leaders are at odds about Syria, where Russia is helping to prop up Assad and has been ramping up its military presence there.

Putin recently said in a "60 Minutes" interview with CBS News' Charlie Rose, "There is no other solution to the Syrian crisis than strengthening the effective government structures and rendering them help in fighting terrorism...[and] at the same time, urging them to engage in positive dialogue with the rational opposition and conduct reform."

In his speech, however, Mr. Obama was insistent that Assad must leave power.

"We must recognize that there cannot be, after so much bloodshed, so much carnage, a return to the prewar status quo," he said. But the president also pledged that the U.S. "is prepared to work with any nation, including Russia and Iran, to resolve the conflict."

The president also raised the conflict in Ukraine, condemning Russia's intervention in the eastern part of the country and the failure to resolve the conflict through diplomatic means. The issue is still the chief point of tension in the U.S.-Russia relationship: while the White House has said that Mr. Obama and Putin will discuss Ukraine, the Kremlin has indicated that Putin intends to focus on the fight against the Islamic State of Iraq and Syria (ISIS) and will only discuss Ukraine if there is time.

Mr. Obama made sure the issue was heard at the U.N. through his speech.

"Imagine if instead, Russia had engaged in true diplomacy and worked with Ukraine and the international community to ensure its interests were protected. That would be better for Ukraine but also better for Russia and better for the world, which is why we continue to press for this crisis to be resolved in a way that allows a sovereign and Democratic Ukraine to determine its feature and control its territory," the president said.

He warned other nations, "If that happens without consequences in Ukraine, it could happen to any nation gathered here today."

As a contrast to the issue of Ukraine, the president highlighted the Iran nuclear deal and restoration of ties between the U.S. and Cuba to argue that the world should still seek to resolve conflicts with diplomacy.

The president also urged countries to resist the temptation to "return to the old ways of conflict and coercion."

"We live in an integrated world, one in which we all have a stake in each others' success. We cannot turn back those forces of integration. No nation in this assembly can insulate itself from the threat of terrorism or the risk of financial contagion; the flow of migrants or the danger of a warming planet," he said. "The disorder we see is not driven solely by competition, nations or any single ideology, and if we cannot work together more effectively we will all suffer the consequences."

This is true for the United States as well, he said, holding up the war in Iraq as an example that showed that largely unilateral U.S. action and money could not bring about stability.

He also issued a more general warning to dictators around the world that their actions reveal a weakness in their leadership, not strength.

"I believe in my core that repression cannot form the social cohesion for nations to succeed," the president said. "Dictatorships are unstable, the strongmen of today become the spark of revolution of tomorrow. You can jail your opponents but you can't imprison ideas."