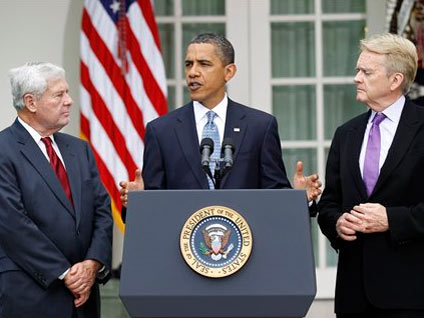 President Obama today said that America "will bring those responsible to justice" if crimes were committed that led to the oil leak in the Gulf, the worst oil spill in the nation's history.

"We have an obligation to investigate what went wrong, and to determine what reforms are needed so that we never have to experience a crisis like this again," the president said.

"If the laws on our books are insufficient to prevent such a spill, the laws must change," he continued. "If oversight was inadequate to enforce these laws, oversight has to be reformed. If our laws were broken leading to this death and destruction, my solemn pledge is that we will bring those responsible to justice on behalf of the victims of this catastrophe and the people of the Gulf region."

The White House has pivoted to a more aggressive tone toward BP and the other companies responsible for the leak, and the president's comments came after a meeting with the co-chairs of his commission investigating the circumstances that led to the leak.

The president said that the co-chairs of the BP Oil Spill Commission, Bob Graham and William K. Reilly, will have his "full support to follow the facts wherever they may lead, without fear or favor." The two men and the other, still-to-be-named members of the commission will have six months to complete their report.

The president said that more than 20,000 people are now working to contain and clean up the spill, and that over 1,700 vessels are aiding in the response. Speaking in the Rose Garden, he said he had ordered that manpower be tripled in areas where oil has hit land or where it is expected to do so in the next 24 hours.

"We're continuing our efforts on all fronts to contain the damage from this disaster and extend to the people of the Gulf the help they need to confront this ordeal," he said, stating that the government is engaged in "minute to minute" monitoring of the effort to stop the leak.

The president said doctors and scientists have been deployed "to look out for people's health and monitor any ill effects felt by clean-up workers and residents."

The president again complained that for years there has been "a far-too-cozy relationship between oil companies and the agencies that regulate them," chief among them the Minerals and Management Services Agency. He pointed to his administration's decision to split the agency as evidence of his administration's action to address the problem, and noted that the administration has placed a six-month moratorium on new offshore drilling in the Outer Continental Shelf.

The Oil Spill Commission, he said, is authorized "to hold public hearings and to request information from government, from not-for-profit organizations, and from experts in the oil and gas industry both at home and abroad, as well as from relevant companies, including B.P. Transocean, Halliburton and others."

"We owe all those who've been harmed, as well as future generations, a full and vigorous accounting of the events that led to what has now become the worst oil spill in U.S. history," the president said. "Only then can we be assured that deep-water drilling can take place safely. Only then can we accept further development of these resources as we transition to a clean energy economy. Only then can we be confident that we've done what's necessary to prevent history from repeating itself."

Mr. Obama's remarks coincide with another sign that the administration may eventually pursue criminal charges against BP: Attorney General Eric Holder is visiting the Gulf Coast today, where he will meet with state attorneys general and U.S. prosecutors.