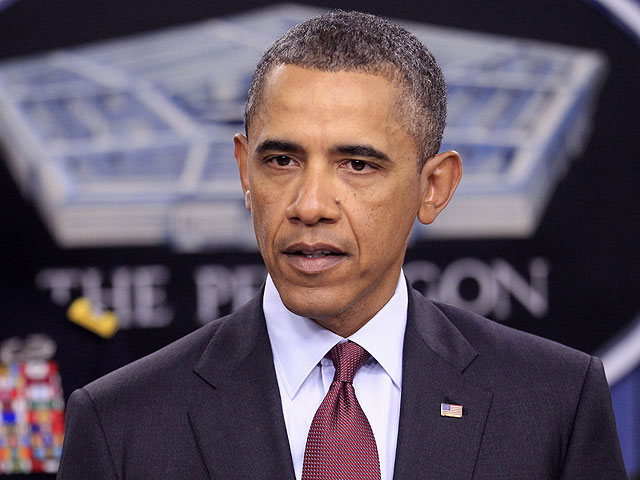 President Obama and Pentagon leaders on Thursday unveiled a new defense strategy for a smaller, more flexible military force, which the president says will prepare the nation for the threats of the future while restoring balance between the defense budget and domestic spending.

"Yes, the tide of war is receding," Mr. Obama said Thursday in a rare appearance from the Pentagon, noting the end of the Iraq war and troop drawdowns in Afghanistan. "But the question that this strategy answers is what kind of military will we need after the long wars of the last decade are over. And today, we're fortunate to be moving forward, from a position of strength."

Mr. Obama and Defense Secretary Leon Panetta acknowledged that the nation's fiscal challenges -- and particularly the $350 billion in cuts mandated by Congress in last summer's Budget Control Act -- required the Pentagon to shape a leaner military force. However, they said that the ever-changing threats to the U.S. also required such changes to be made.

"The size and structure of our military and defense budget have to be driven by a strategy--not the other way around," Mr. Obama said. "Moreover, we have to remember the lessons of history. We can't afford to repeat the mistakes of the past -- after World War II, after Vietnam -- when our military was left ill-prepared for the future."

While the U.S. winds down large-scale military efforts in Iraq and Afghanistan, Panetta said evolving threats include cybersecurity threats, violent extremism, the proliferation of lethal weapons, destability in Iran and North Korea and the rise of powers across Asia.

Mr. Obama said the U.S. will "get rid of outdated Cold War-era systems so that we can invest in the capabilities we need for the future" -- including intelligence, surveillance and counterterrorism.

"So, yes, our military will be leaner, but the world must know -- the United States is going to maintain our military superiority with Armed Forces that are agile, flexible and ready for the full range of contingencies and threats," Mr. Obama said.

Panetta said that the Pentagon will reveal specifics about how much leaner the military will be once it releases its proposed budget later in the year.

"There's no question that we have to make some trade offs, and that we will be taking, as a result of that, some level of additional but acceptable risk in the budget plan we release next month," Panetta said. He added, however, "with this joint force I am confident we can effectively defend the United States of America."

Panetta outlined the changes the military will see, which he said represent a "historic shift to the future."

Firstly, the U.S. joint force will be smaller and leaner.

"Its great strength will be that it will be more agile, more flexible," Panetta said, adding that it will be ready to deploy quickly, more innovative and technically advanced.

Next, U.S. forces will focus more on the Asia Pacific and broader Middle East regions, which are growing in significance to the U.S., both in terms of the economy and national security. Additionally, the U.S. will continue strengthening key alliances, particularly with NATO. Also, Panetta said, the U.S. will develop its capability to confront and defeat more than one adversary at a time.

"Confronting the threats of the 21st century demands greater flexibility to... shift forces," Panetta said, adding that "how we defeat the enemy may very well vary across conflicts."

As the military readies to downsize, Mr. Obama said it's the right time to recalibrate military spending compared to domestic spending.

"After a decade of war, and as we rebuild the sources of our strength--at home and abroad--it's time to restore that balance," he said.

The president noted that even though the defense budget will grow more slowly than it has in the recent past, it will still grow. Furthermore, the U.S. defense budget is larger than the military budgets for roughly the next 10 countries combined, he said.

That said, Panetta reiterated his warning that the additional $600 billion in cuts threatening the Pentagon -- as a result of the congressional supercommittee's failure to find other budget savings -- could critically hurt the military.

"It would result in a demoralized and hollowed out force," he said. "That is not something we intend to do."