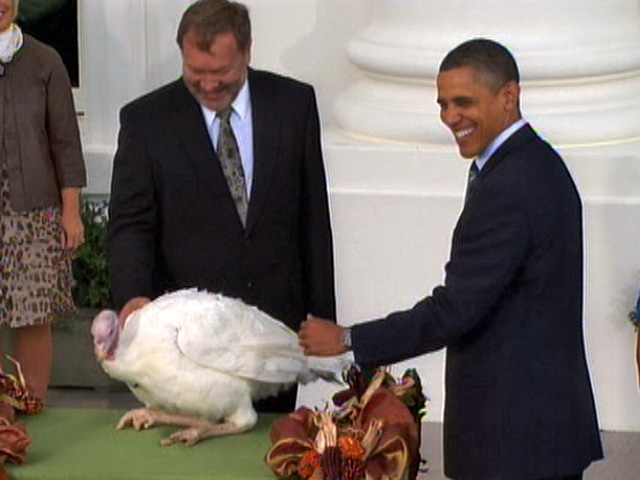 "They don't have it so good," added the president, who went on to reference his "we can't wait" push to take actions without congressional approval.

"We can't wait to pardon these turkeys. Literally," he said. "Otherwise they'd end up next to the mashed potatoes and stuffing."

The 45-pound Liberty, along with understudy Peace, was chosen from 30 finalists for the pardon and was raised by four high school students, who exposed the birds to loud noises and flashbulbs to prepare them for the big day.

In a joke that fell flat, Mr. Obama quipped that as part of their media training the birds were taught "how to gobble without really saying anything" in preparation for their time in Washington. Later, he said of Liberty, "After he finishes a round of cable hits and Sunday shows, he's going to return to a life of leisure at Mount Vernon."

Behind the scenes with the presidentially pardoned turkey

Mr. Obama was flanked at the ceremony by his daughters Sasha and Malia, who looked somewhat bored during the proceedings; when the time came to offer the pardon, he waved his hand over Liberty in the style of a Christian blessing, prompting laughter from the assembled crowd.

"You are hereby pardoned! Give him a round of applause," Mr. Obama said, standing over the bird, who had been placed on a table. His two daughters then took turns briefly petting Liberty, who is about 19 weeks old.

The president said Liberty has "the distinction of being the luckiest bird on the face of the Earth," adding, "right now he's also one of the most confused."

Mr. Obama also took the occasion to wish Americans happy Thanksgiving and to urge them to be "grateful for what we have [and] be mindful of those who have less. Let's appreciate those who hold a special place in our lives and make sure that they know it."

He also urged Americans to "think about those who can't spend the holidays with their loved ones," especially those in the military.

While turkeys have been coming to the White House for more than 50 years, they have only been pardoned for the last couple decades. Last year, Mr. Obama noted that both Presidents Eisenhower and Johnson ate the turkeys presented to them, while President Kennedy's turkey came with a sign that said, "Good Eatin', Mr. President" around its neck. Two years ago, Mr. Obama suggested he was reluctant to pardon the turkey, quipping that he "was planning to eat this sucker" before his daughters intervened.

The History of the Presidential Turkey Pardon

Mr. Obama, his wife Michelle and their daughters planned to visit a food bank in Washington following the pardon ceremony to bring two turkeys to the needy.

"Even when times are tough, we look out for each other, we lift each other up, and we remind ourselves just how lucky we are here together in the greatest country on Earth," said Mr. Obama. "So from our family to yours, I want to wish everybody a wonderful and happy and healthy Thanksgiving."