Watch CBS News Videos Online
"You know, there are certain days that remind me of why I ran for this office," President Obama exclaimed today. "And then there are moments like this, where I pardon a turkey and send it to Disneyland."

With a light tone and his daughters in tow, Mr. Obama participated in a relatively recent tradition on the day before Thanksgiving: The presidential turkey pardon. Though he eventually raised his hand over "Courage," the bird in question, to offer a pardon, the president suggested he was somewhat reticent to do so.

"That's a good looking bird," Mr. Obama said, later stating that his daughters convinced him to go through with the pardon. "Thanks to the intervention of Malia and Sasha, because I was planning to eat this sucker, Courage will also be spared this terrible and delicious fate."

While turkeys have been coming to the White House for more than 50 years, they have only been pardoned for the last couple decades. Mr. Obama noted that both Presidents Eisenhower and Johnson ate the turkeys presented to them, while President Kennedy's turkey came with a sign that said, "Good Eatin', Mr. President" around its neck. 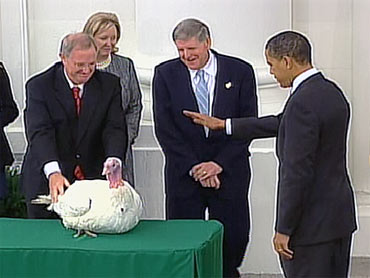 (CBS)
Courage, this year's lucky bird, will be the grand marshal of a parade at Disneyland tomorrow; he will then live out the rest of his days at the theme park. A backup turkey, "Carolina," was also spared, in case Courage cannot fulfill his duties.

Sasha and Malia Obama took the opportunity to pet the turkey, which was donated by the National Turkey Federation, following the pardon. One of the girls could be heard saying, "he is like a large chicken."

As Knoller points out, the turkey pardon today was moved from the White House Rose Garden to the North Portico today – because, ahem, of "fowl weather." 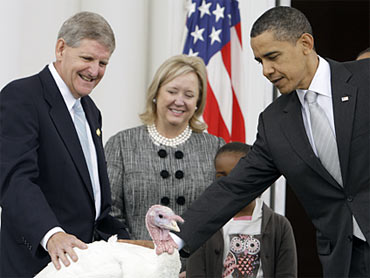 (AP Photo/Alex Brandon)
The president said the Obama family would travel to an organization called Martha's Table in the District of Columbia later in the day to help the needy. He also took time during the event to honor military men and women and discuss the "quintessentially American holiday" of Thanksgiving.

"Every single day, I am thankful for the extraordinary responsibility that the American people have placed in me," he said. "I am humbled by the privilege that it is to serve them, and the tremendous honor it is to serve as Commander-in-Chief of the finest military in the world -- and I want to wish a Happy Thanksgiving to every service member at home or in harm's way. We're proud of you and we are thinking of you and we're praying for you."

"When my family and I sit around the table tomorrow, just like millions of other families across America, we'll take time to give our thanks for many blessings," he continued. "But we'll also remember this is a time when so many members of our American family are hurting. There's no question this has been a tough year for America."

"This is an era of new perils and new hardships," Mr. Obama added. "But we are, as ever, a people of endless compassion, boundless ingenuity, limitless strength. We're the heirs to a hard-earned history and stewards of a land of God-given beauty. We are Americans. And for all this, we give our humble thanks -- to our predecessors, to one another, and to God."

The president then said it was time to pardon the turkey – "before I change my mind."