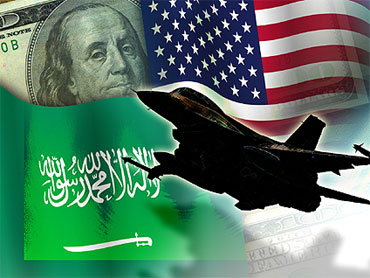 The Wall Street Journal reports the White House will officially notify Congress in the next two weeks of a $60 billion deal to sell Saudi Arabia dozens of U.S.-made fighter jets and military helicopters.

If it goes ahead, the sale of some 84 new F-15 jets and dozens of helicopter will be the largest U.S. arms deal ever.

The Obama administration is pitching the sale as a major opportunity to create new jobs for the beleaguered American economy. Companies including Boeing, Northrop Grumman, Lockheed Martin and General Electric say more than 75,000 jobs could be created to build the new aircraft.

According to The Journal's sources, who remained anonymous, negotiations are also continuing on a side-deal which could see the Saudis pay an additional $30 billion for a U.S.-made upgrade to their naval forces.

Congress is expected to okay the sale of the aircraft ---- made tough to reject in America's current economic state by the prospect of new jobs.

As much as it represents a potential boon for the U.S. economy, the deal with Saudi Arabia would also serve to shore-up the defenses of a nation at the heart of the Middle East which is often viewed as America's key partner in the effort to stem Iran's regional influence.

Iran criticized the arms deal with Saudi Arabia as potentially destabilizing almost as soon as it became public three years ago.

"What the Persian Gulf region needs is stability and security," Mohammad Ali Hosseini, a spokesman for Iran's Foreign Ministry, was quoted as saying on a government Web site in July of 2007. "Americans have been trying to disturb it by selling weapons to the region."