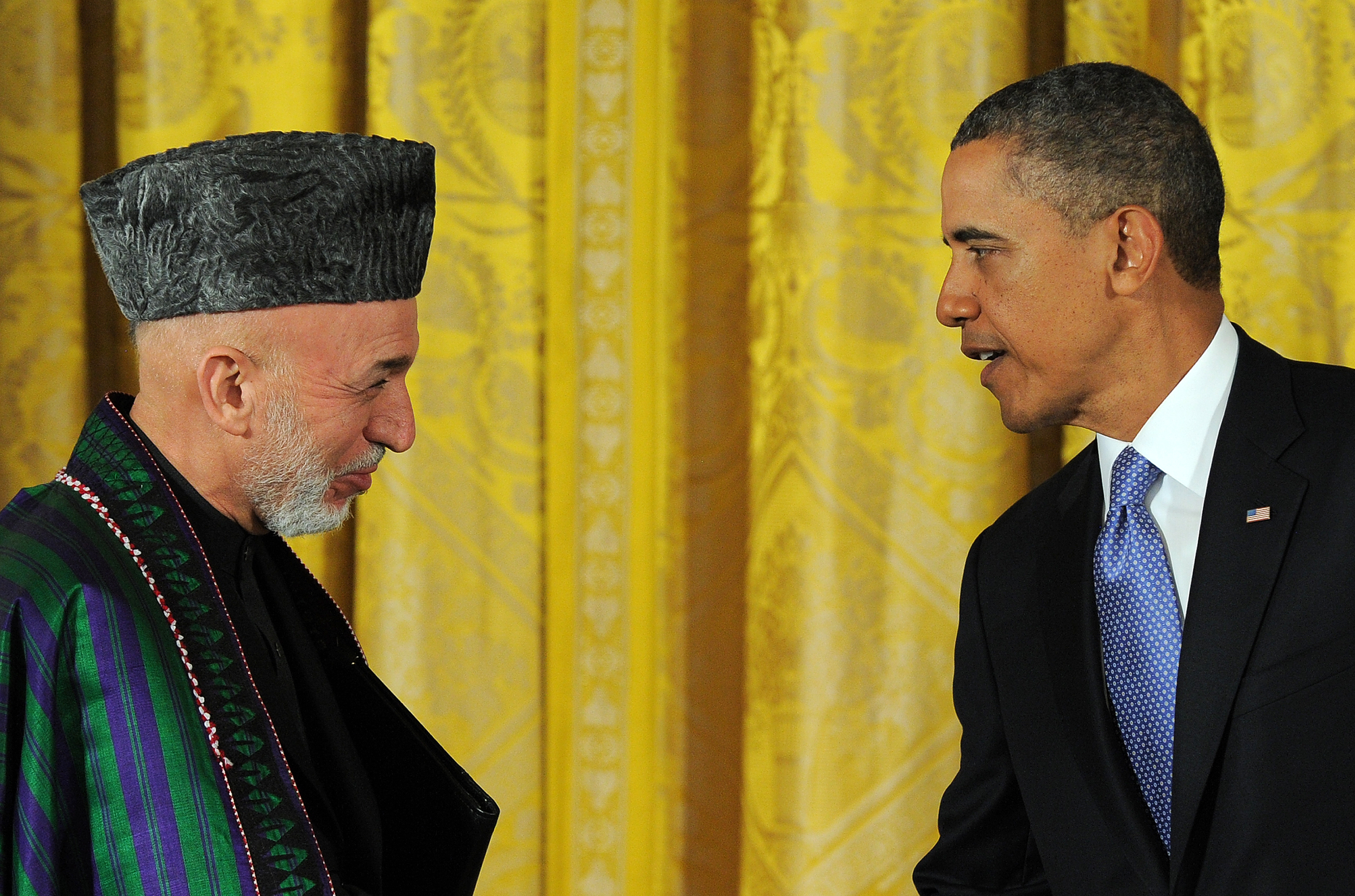 Updated at 5:45 p.m.
President Barack Obama has ordered the Pentagon to plan for a full American withdrawal from Afghanistan by the end of this year should the Afghan government refuse to sign a security agreement with the U.S, the White House said Tuesday.
But in a call with Afghan President Hamid Karzai, Obama also said the U.S. could still keep a limited troop presence in Afghanistan after 2014 if the agreement is ultimately signed. He acknowledged that Karzai was unlikely to sign the bilateral security agreement himself, leaving the fate of the continued U.S. troop presence in Afghanistan to the winner of the country's April elections.

"We will leave open the possibility of concluding a BSA with Afghanistan later this year," the White House said in a summary of the call between the two leaders. However, the White House added that "the longer we go without a BSA, the more likely it will be that any post-2014 U.S. mission will be smaller in scale and ambition."

Tuesday's call was the first known contact between Obama and Karzai since June, underscoring the White House's frustration with the Afghan leader's stubborn refusal to sign the security agreement. The White House has repeatedly said it would not leave American troops in Afghanistan without the agreement.

Defense Secretary Chuck Hagel called Obama's order to the Pentagon "a prudent step" given the likelihood that Karzai will not sign the agreement. However, he said the Pentagon would also continue to make plans for a possible U.S. mission in Afghanistan after this year, which would focus on counterterrorism and training Afghan security forces.

But the administration's position has raised concern among lawmakers on Capitol Hill.

McCain said he would have acknowledged that the U.S. could not sign an agreement with Karzai -- though he suggested the situation might have been mishandled -- and turned his attention to the country's next president, noting that all of the current presidential candidates have supported a residual American force.

"It has to be a large and capable force which will make a difference to help them prevail over a continuing war. otherwise it will turn out like Iraq has where the black flags of al Qaeda are now flying over the city of Fallujah," he said.

Hagel will discuss the future of the U.S.-led mission in Afghanistan with NATO leaders during a summit this week in Brussels.

The U.S. currently has about 33,600 troops in Afghanistan, down from a high of 100,000 in 2010. Obama has been weighing options from the Pentagon that would keep as many as 10,000 troops in the country after this year, contingent on the security agreement. However, some White House officials are believed to support keeping a smaller troop presence.

The longer the decision takes, the more expensive and risky the troop drawdown will become. With less time to move troops and equipment, the military will have to fly assets out rather than use cheaper ground transportation.

If the security pact is never signed, the Pentagon's biggest challenge will be closing large military facilities, including the Bagram and Kandahar air bases. Shutting down a massive base typically it takes about 10 months, but military officials said they are prepared to do it in a much shorter - although far more expensive - period if necessary. Military officials said commanders would still like to have about six months to shut the facilities down. If there is no security agreement by late summer, the officials said closing the bases by the end of the year becomes far more difficult.