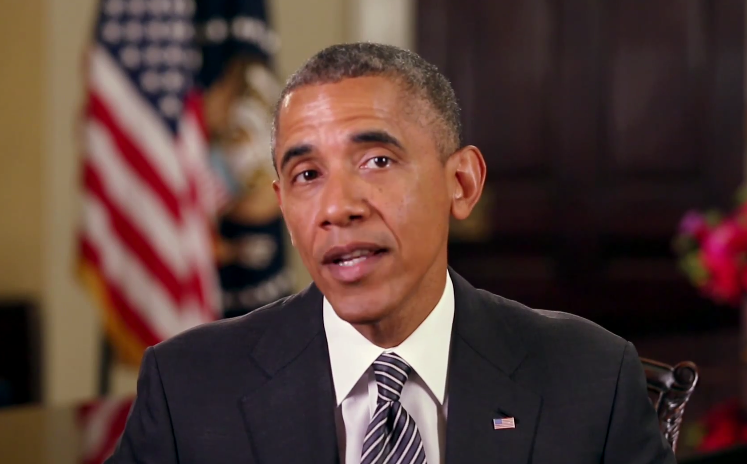 President Obama on Saturday settled back into the punchy, campaign-style message he's been delivering on the road over the last several weeks, mocking House Republicans' plan to sue him and urging them to "do something" instead of just taking potshots at him.

"So far this year, Republicans in Congress have blocked every serious idea to strengthen the middle class. Lifting the minimum wage, fair pay, student loan reform - they've said no to all of it," the president said in his weekly address. "And that's when I've acted this year to help working Americans on my own - when Congress won't act. I've taken actions to attract new jobs, lift workers' wages, help students pay off their loans and more."

But the Republican plan "is not to do some of this work with me - instead, it's to sue me," the president said. "That's actually what they're spending their time on. It's a political stunt that's going to waste months of America's time. And by the way, they're going to pay for it using your hard-earned tax dollars."

And the president offered Republicans in Congress a "better idea."

"Do something," he said. "Do anything to help working Americans. Join the rest of the country. Join me. I'm looking forward to working with you."

On Thursday, House Republicans released a draft resolution that would allow the House to sue the president for what they see as an excessive use of executive authority. The focus of the planned lawsuit is the president's decision to delay the employer mandate of his health care law. That provision, which requires most businesses to provide health insurance to their employees, was originally slated to take effect this year, but the president delayed it until 2015 last year, and in February he pushed it back again, this time to 2016.

"In 2013, the president changed the health care law without a vote of Congress, effectively creating his own law by literally waiving the employer mandate and the penalties for failing to comply with it," House Speaker John Boehner, R-Ohio, said in a statement. "That's not the way our system of government was designed to work. No president should have the power to make laws on his or her own."

The House Rules Committee will hold a hearing on the lawsuit resolution next week, and a vote from the House floor should happen later in July.

In a series of public appearances this week, the president mocked the planned lawsuit against him, saying Republicans are suing him for doing his job when they're incapable of doing their own job by passing bills and reaching compromise.