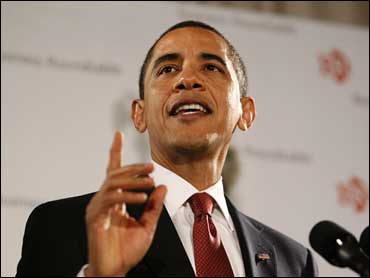 (AP)
President Obama addressed business leaders this afternoon, promising them that he backs free markets despite concerns over excessive government involvement in the private sphere.

The president said that despite the fact that the government has to play a greater role than it has been, its role is simply to "right the ship" in the short term, after which the time will come to "let private enterprise do its magic."

As the Associated Press notes, the president also said things are never as bad, or as good, as they seem.

"…things two years ago were not as good as we thought because there were a lot of underlying weaknesses in the economy," he said. "And they're not as bad as we think they are now."

He added that he is optimistic about the economy in the long run and that it is a mistake to respond to daily fluctuations.

"…my focus has to be on the long term," he said. "And my long-term projections are highly optimistic, if we take care of some of these long-term structural problems."