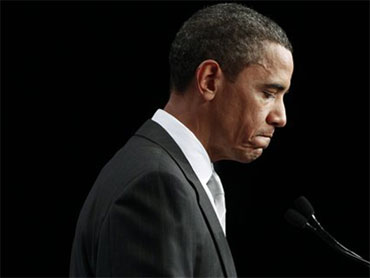 President Barack Obama said Sunday that there's "a lot of obsession" about the withdrawal date for U.S. troops from Afghanistan. He said his focus is on making sure the mission there is successful.

Obama's show of frustration about when he will end the unpopular war in Afghanistan came in his closing press conference at the G-20 summit in Toronto, where industrialized countries committed to slash their budget deficits in half by 2013. The president said the United States shares that commitment.

At the end of a week in which he dismissed his top commander in Afghanistan, Obama defended his war strategy and said the United States would assist the Afghans "for a long time to come."

"I don't have a crystal ball," the president said when asked about a five-year Afghanistan exit strategy endorsed Saturday by the Group of Eight major industrial democracies.

"I think that right now the debate surrounding Afghanistan is presented as either we get up and leave immediately because there's no chance at a positive outcome, or we stay basically indefinitely and do quote unquote whatever it takes for as long as it takes."

Obama's policy falls somewhere in the middle, thereby pleasing few. He reiterated that a July 2011 date to begin withdrawing troops does not mean the U.S. will "suddenly turn off the lights and let the door close behind us." Under Obama's policy, the number of U.S. troops in Afghanistan will first climb to 98,000.

Obama offered a rationale for the nation's very presence in Afghanistan.

"You'll often hear, why are we in Afghanistan when the terrorists are in Pakistan?" Obama said.

He contended America would be less secure if al Qaeda still could be housed in Afghanistan, and contended there remains "a vital national interest that Afghanistan not be used as a base to launch terrorist attacks."

In Washington, CIA Director Leon Panetta expressed skepticism about whether insurgent groups in Afghanistan were interested in reconciliation with the U.S.-backed government in Kabul.

"I think that we have to view these efforts with skepticism, but also openness," the president said.