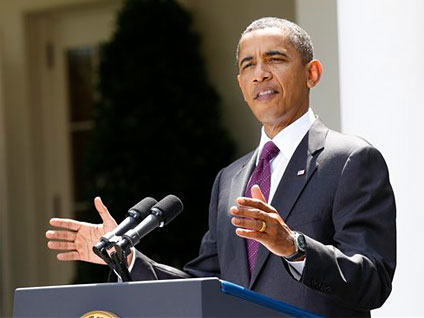 He also harshly criticized Republicans for standing in the way of passage, using campaign trail-type rhetoric in the Rose Garden.

Tomorrow's planned vote on DISCLOSE in the Senate, he said, is "about how much influence special interests should have over our democracy."

He said that under the current rules, special interests "can hide behind a name like 'Citizens for a Better Future,' even if a more accurate name would be 'Companies for Weaker Oversight.'"

"Imagine the power this will give special interests over politicians," Mr. Obama said, discussing how a company or group could threaten to run "an onslaught of negative ads in their next campaign" against a politician who opposes its agenda.

The president said passing DISCLOSE should be "common sense."

"You'd think that reducing corporate and even foreign influence over our elections would not be a partisan issue, but of course this is Washington in 2010," he said.

Mr. Obama criticized Republicans for trying to keep DISCLOSE from coming up for a vote, linking their opposition to their standing in the way of an extension of unemployment benefits.

"On issue after issue, we are trying to move America forward and they keep trying to take us back," he said.

Also known as the Democracy is Strengthened by Casting Light on Spending in Elections Act, the DISCLOSE Act mandates that corporations and unions spending on campaigns and running political advertising publicly identify top donors and related information.

It would also restrict foreign-controlled corporations from spending money in U.S. elections.

In his remarks, Mr. Obama invoked a Republican president, Theodore Roosevelt, who warned against corporate influence in elections because he "didn't want everybody else being drowned out."

A vote against the bill, he said, is a vote to "allow corporate and special interest takeover of our elections."

And Sen. Mitch McConnell, the Republican leader in the Senate, said that "the mere suggestion that a bill designed to save politicians' jobs should take precedent over helping millions of Americans find work is an embarrassing indictment of Democrats' priorities."

If the DISLCOSE Act passes, corporations and unions would have to disclose the top five donors in their political ads. In addition, the head of a company or group behind an ad would be required to appear in it, much like a candidate now has to "approve this message."

The bill exempts certain organizations with more than 500,000 members, including the NRA, AARP and the Humane Society, from the requirements.

The exemptions angeredboth liberals who were upset over concessions to the NRA as well as conservatives angry that the pro-gun lobby agreed not to oppose the legislation. Critics have also noted the irony that a bill meant to rein in special interests includes a carve-out for some of them.

Conservative groups have cast DISCLOSE as an impingement on free speech.

"With millions of Americans out of work, you would think the Senate would focus its efforts on creating American jobs rather than spending time on a bill designed to protect their own," U.S. Chamber of Commerce President and CEO Thomas J. Donohue said in a statement today. "The DISCLOSE Act is a perfect example of Washington politics at its absolute worst, and at a time when the country can afford it least. Legislation that silences incumbent politicians' critics and exempts their political friends should never be considered in America."