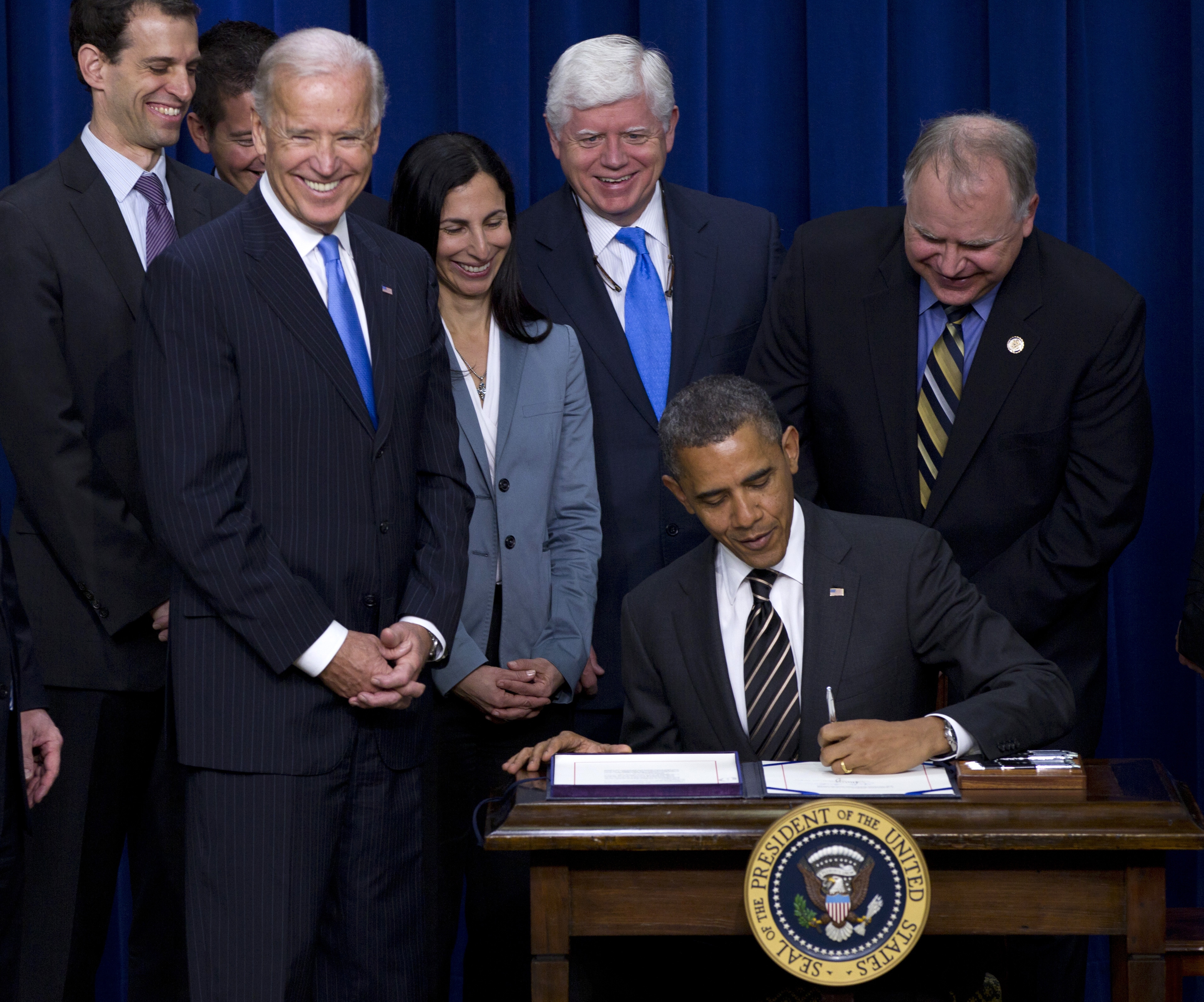 The measure, which passed in Congress last month, prohibits members of Congress from financial market trading based on nonpublic information they have obtained in the course of their congressional work.

The president hailed the law as a "good and necessary" step in the fight against corruption and the influence of money in politics. Still, the president encouraged Congress to enact more reforms, while some public advocates lamented the fact that the bill was watered down.

In spite of its shortcomings, Mr. Obama said the law's bipartisan support "shows when an idea is right we can still accomplish something on behalf of the American people to make our government and our country stronger."

"The powerful shouldn't get to create one set of rules for themselves and another set of rules to everybody else," Mr. Obama said. That rule, he said, "certainly should apply to our elected officials, especially at a time when there's a deficit of trust" in Washington.

Lawmakers are already subject to insider trading laws, but some argue that current insider trading laws have, up to this point, not applied to nonpublic information about current or upcoming congressional activity, since members of Congress aren't technically obligated to keep that information confidential. The issue of "insider trading" in Congress came to the fore after a piece on CBS News' "60 Minutes" shed new light on the matter last year. Hotsheet also spotlighted the issue in its "United States of Influence" series, which examined the influence of money in Washington.

The president was joined at the bill signing by its Republican and Democratic backers, as well as public advocates who have pressed for reform on the issue for years.

Craig Holman, a government affairs lobbyist for the consumer advocacy organization Public Citizen, joined Mr. Obama today and said in a statement that the new law represents "the most significant ethics achievement of the 112th Congress."

Still, he said, "It could and should be stronger, and legislation is pending to strengthen it. Wall Street didn't want this, and Congress passed it only because they were shamed into it."

In addition to barring "insider trading," the STOCK Act requires that members of Congress and government employees report certain investment transactions within 45 days after a trade. There are a handful of other disclosure and ethics requirements in the bill; For instance, congressmen and certain government employees will have to disclose the terms of their personal mortgages. Congressmen are also barred from getting special access to initial public offerings (IPOs).

Will "political intelligence" stay in the dark?Senators: We shouldn't buy and sell stocks

But in order to pass both Houses of Congress, the legislation was pared back from its original form. The final bill dropped a provision passed in the Senate that would have given prosecutors new tools to investigate and prosecute criminal conduct by public officials. The final version also left out a provision that would have required those employed in the burgeoning "political intelligence" industry to register with Congress in the same way that lobbyists do. In the political intelligence industry, people with access to insider information sell their knowledge of political developments to Wall Street investors, who then use it to make investment decisions.

The political intelligence provision was stripped in the House after House Majority Leader Eric Cantor said there should be more study of the issues involved. He also said the issue was outside the scope of the bill and wondered if the amendment could have negative consequences.

Mr. Obama today advocated for more reforms, such as barring congressmen from trading in any stocks in a sector they may influence -- an idea promoted by some lawmakers like Democratic Sens. Sherrod Brown of Ohio and Jeff Merkley of Oregon.