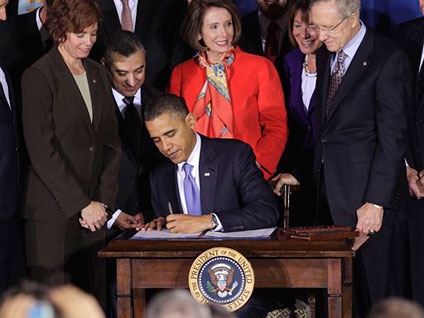 President Obama signed historic legislation to allow repeal of the 17-year-old "don't ask, don't tell" policy banning gay men and women from serving openly in the military on Wednesday morning, hailing the bill as one that will "strengthen our national security and uphold the ideals that our fighting men and women risk their lives to defend."

Passage of the bill represents a victory for Mr. Obama, who promised to end the policy as a candidate, as well as the gay rights activists who crowded into an Interior Department auditorium for the event. Many have harshly criticized the Obama administration over the past two years for what they see as a failure to move aggressively on gay rights issues.

What's Next for the Gay Rights Movement?

The activists cheered the president wildly when he emerged onstage, breaking out into a chant of "Yes, we can," a phrase whose use has faded -- in conjunction with the enthusiasm of many in Mr. Obama's liberal base -- since the election. One yelled, "thank you, Mr. President."

"I am just overwhelmed," Mr. Obama said. "This is a very good day."

He told a story of a gay soldier named Andy Lee from World War II who saved a soldier whose son was in the audience for the signing. The soldier Lee saved, Private Lloyd Corwin, "knew that valor and sacrifice are no more limited by sexual orientation than by race or by gender or by religion or by creed," Mr. Obama said.

The president thanked the lawmakers who backed repeal and joined him onstage for the signing, including Democratic Leaders Rep. Nancy Pelosi and Sen. Harry Reid, GOP Sen. Susan Collins and Independent Sen. Joe Lieberman. He hailed passage as a bipartisan victory in the wake of a Senate vote on repeal that attracted eight Republicans.

He also commended military leaders, including Defense Secretary Robert Gates and Joint Chiefs of Staff Chairman Admiral Mike Mullen, the latter of whom said early in the repeal effort that he personally believed the "don't ask" policy was wrong.

"I'm confident history will remember well the courage, the vision, of Secretary Gates, of Admiral Mike Mullen who spoke from the heart and said what he believed was right," said Mr. Obama.

Even though the repeal has now been signed into law, it will still be some time before it is completely implemented. Mr. Obama and military leaders must certify that implementation will not harm combat readiness. After that, a 60-day waiting period goes into effect before implementation can move forward. (A last minute Republican effort to kill repeal by mandating that the service chiefs also offer certification - including Marine Corps chief General James Amos, who has expressed opposition to the policy - failed Tuesday night.)

Gates has stressed that the military must have the necessary time to implement the policy effectively, and the military will now move to train troops and write regulations on issues like dealing with objections to barracks assignments in advance of the change. The Pentagon is being deliberately vague about how long the entire procedure would take, but at one point Gates said it could take up to a year.

The president insisted that service chiefs are committed to implementing the policy "swiftly and efficiently."

"We are not going to be dragging our feet to get this done," he said.

Mr. Obama urged gay members of the military to remember that the policy has not been implemented, an implied recommendation that they do not come out before repeal goes through. Even before implementation, however, the military is expected to continue its de facto moratorium on expelling troops because of their sexuality that has been in effect for months.

He expressed gratitude to those who had fought for repeal, including members of the military who had been expelled for being gay -- who he encouraged to re-enlist -- and also spoke directly to gay men and women still serving.

"For a long time, your service has demanded a particular kind of sacrifice," he said. "You've been asked to carry the added burden of secrecy and isolation and all the while you have put your lives on the line for the freedoms and privileges of citizenship that are not fully granted to you."

He said gay soldiers had carried such a burden throughout American history.

"You're not the first to have carried this burden," he said. "For while today marks the end of a particular struggle that has lasted almost two decades, this is a moment more than two centuries in the making. There will never be a full accounting of the heroism of gay Americans in service to this country. Their service has been obscured in history. But at every turn, every crossroads in our past, we know gay Americans fought just as hard, gave just as much to protect this nation and the ideals for which it stands. There can be little doubt."

The president added that concerns about changes to the policy are understandable, but not insurmountable.

"Now, with any change there's some apprehension," Mr. Obama said. "That's natural. But as Commander in Chief, I am certain that we can effect this transition in a way that only strengthens our military readiness and that people will look back on this moment and wonder, why was ever a source of controversy in the first place?"

During a press conference late Wednesday afternoon, Mr. Obama was asked about his opposition to gay marriage in light of his signing the repeal bill. He stood by his opposition, saying he still supports only "strong civil unions," but added that his feelings are "evolving."

He said that "this is going to be an issue that is not unique to the military, this is an issue that extends to all of our society and I think we're all going to have to have a conversation about it."