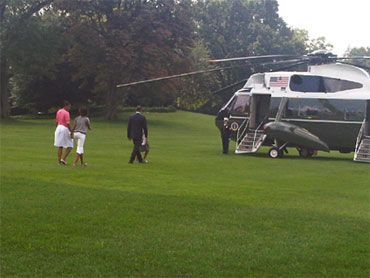 (CBS/Mark Knoller)
Like a kid who can't wait to try out his new baseball glove, President Obama got a fishing reel for his birthday last week and intends to give it a workout this afternoon while fly-fishing in Montana.

With the press corps a distance away, he'll step into a pair of waders and enter the pristine waters of Big Sky Country in search of trout, pike and bass.

If he hooks any, they need not worry about ending up in the frying pan. We're assured Mr. Obama will follow a politically-correct policy of "catch-and-release."

When asked if the press will get to cover the Fly-fisher-in-Chief, the answer from spokesman Gibbs amounted any of the following: no way; not a chance; in your dreams; when hell freezes over.

It remains to be seen how much we'll see of the president when he and his family visit Yellowstone National Park tomorrow and the Grand Canyon on Sunday.

It's never fun to have the White House press corps around, but even less so than usual when the president is trying to enjoy a little rest & recreation with his family.

Modern-day presidents are reluctant to be seen taking time off – even though their job is a killer and a prescription for rapid burn-out.

Especially now, with the nation at war, and the economy struggling to emerge from a recession, Mr. Obama is understandably self-conscious about take a little vacation.
He's played golf 13 times since taking office, but the press has not once been allowed to see him tee off.

Some presidents also avoid avoided the word "vacation," although spokesman Gibbs hasn't yet reached that point.

Talking yesterday about the Obama Family's plans to spend a week on Martha's Vineyard at the end of August, spokesman Gibbs was asked if the president would work on other issues.

"As he's on vacation, he will concentrate on being on vacation," said the press secretary.

But recent history has shown how easily a presidential vacation can be intruded upon by unexpected world events.

In September 1982, Russian jets shot down a Korean jetliner, forcing President Reagan to cut short his ranch vacation in Santa Barbara and return to Washington to manage the crisis.

On August 20, 1998, President Clinton interrupted his stay in Martha's Vineyard to announce that he was returning to Washington because U.S. forces had launched missile strikes on "terrorist-related facilities in Afghanistan and Sudan."

In September 2005, when the government response to Hurricane Katrina provided markedly inadequate, President Bush ended his Texas ranch vacation a couple days early to head back to the White House.

In fact, more often than not, some issue comes up requiring a vacationing president to appear before reporters or pull the plug on his holiday.

But don't feel sorry for them. Remember, they begged us to elect them to the job – and they're well compensated – with more than just money.

Check out today's "Washington Unplugged" with CBS News' Bill Plante and me for more on the history of presidential vacations.

(CBS)
Mark Knoller is a CBS News White House correspondent. You can read more of his posts in Hotsheet here. You can also follow him on Twitter here: http://twitter.com/markknoller.
View CBS News In
CBS News App Open
Chrome Safari Continue
Be the first to know
Get browser notifications for breaking news, live events, and exclusive reporting.