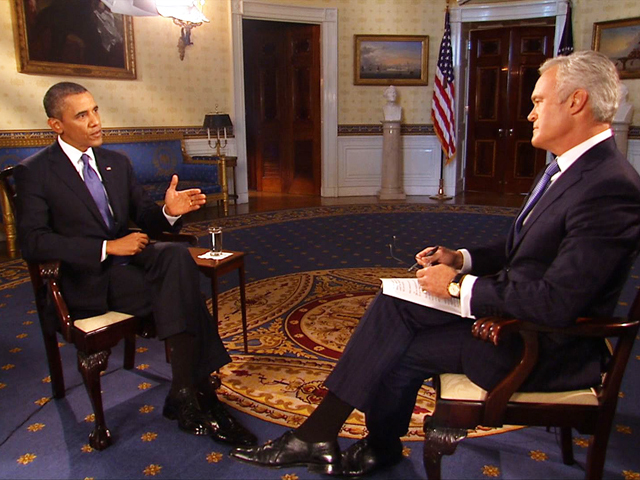 In an interview Monday afternoon with CBS Evening News anchor Scott Pelley, President Obama called Russia's proposal for Syria to give up its chemical weapons a "potentially positive development" that could resolve his concerns over Syrian President Bashar Assad's use of the weapons stockpile.

"Let's see if they're serious," Mr. Obama said in the one-on-one interview from the White House. "But we have to make sure that we can verify it and enforce it, and if in fact we're able to achieve that kind of agreement that has Russia's agreement and the [United Nations] Security Council's agreement, then my central concern in this whole episode resolved."

The president said it would be premature at this point to detail the terms of an agreement that he would accept, but he said the U.S. will be discussing the idea this week with Russia and the rest of the international community.

"Let's see what happens over the next several days to see if, in fact, what they're talking about is realistic," he said. "The key is, to paraphrase Ronald Reagan, we don't just trust but also verify."

Mr. Obama added that negotiations over Syria's chemical weapons would not have reached this point had it not been for the pressure the U.S. has placed on the Assad regime.

"I don't think that we would've gotten to the point where they even put something out there publicly had it not been and... if it doesn't continue to be a credible military threat from the United States."

Mr. Obama this week is continuing his efforts to win support -- from the public and from Congress -- for a military strike in Syria in response to Assad's alleged use of chemical weapons. The president plans to address the issue Tuesday in a televised address to the nation, and in closed-door meetings with senators. Senate Majority Leader Harry Reid unexpectedly postponed a test vote originally set for Wednesday on Mr. Obama's call for congressional backing of a military strike.

Members of the president's cabinet -- past and present -- also made the case Monday for a military strike.

Former Secretary of State Hillary Clinton announced Monday that she supports President Obama's call for a military strike on Syria and urged Congress to vote to back him.

"I will continue to support his efforts, and I hope the Congress will as well," Clinton said at a White House event, after she discussed the latest developments on Syria with Mr. Obama earlier in the day.

Clinton also said she could support the Russian proposal for Syria to avert a U.S. military strike by placing its chemical weapons under international control and dismantling them quickly -- as long as it's not a delaying tactic.

"If the regime immediately surrendered its stockpiles to international control as was suggested by Secretary Kerry and the Russians, that would be an important step," Clinton said. "But this cannot be another excuse for delay or obstruction, and Russia has to support the international community's efforts sincerely or be held to account."

Like Mr. Obama, she said the current discussions "only could take place in the context of a credible military threat by the United States."

The Russian proposal, put forward by Russian Foreign Minister Sergey Lavrov, came hours after Secretary of State John Kerry said Assad could resolve the crisis by giving up "every single bit" of his arsenal to the international community by the end of the week. While Clinton suggested Kerry's remarks were in sync with the Russian proposal, State Department spokeswoman Jen Psaki on Monday said that the secretary of state was "making a rhetorical argument about the impossibility and unlikelihood of Assad turning over chemical weapons he has denied he used."

A senior State Department official told CBS News that in a phone call with Lavrov Monday, Kerry stressed that his comments were rhetorical and expressed serious skepticism over the Russian plan. He made clear that the administration had no intention of delaying its efforts to win congressional approval for military action.

At a White House press briefing Monday, Deputy National Security Adviser Tony Blinken told reporters, "We want to take a hard look at the proposal," adding, "We would welcome a decision and action by Syria to give up its chemical weapons."

Blinken said "the whole point of what we're doing" is to stop Assad from using chemical weapons in the future. However, he added, "It's very important to note that it's clear that this proposal comes in the context of the threat of U.S. action and the pressure that the president is exerting. So it's even more important that we don't take the pressure off and that Congress give the president the authority he's requested."

Noting their refusal up to this point to acknowledge the existence of those weapons, White House spokesman Jay Carney on Monday said that while the U.S. will "work with the Russians and speak with them" about their proposal, "We would have some skepticism about the Assad regime's credibility."