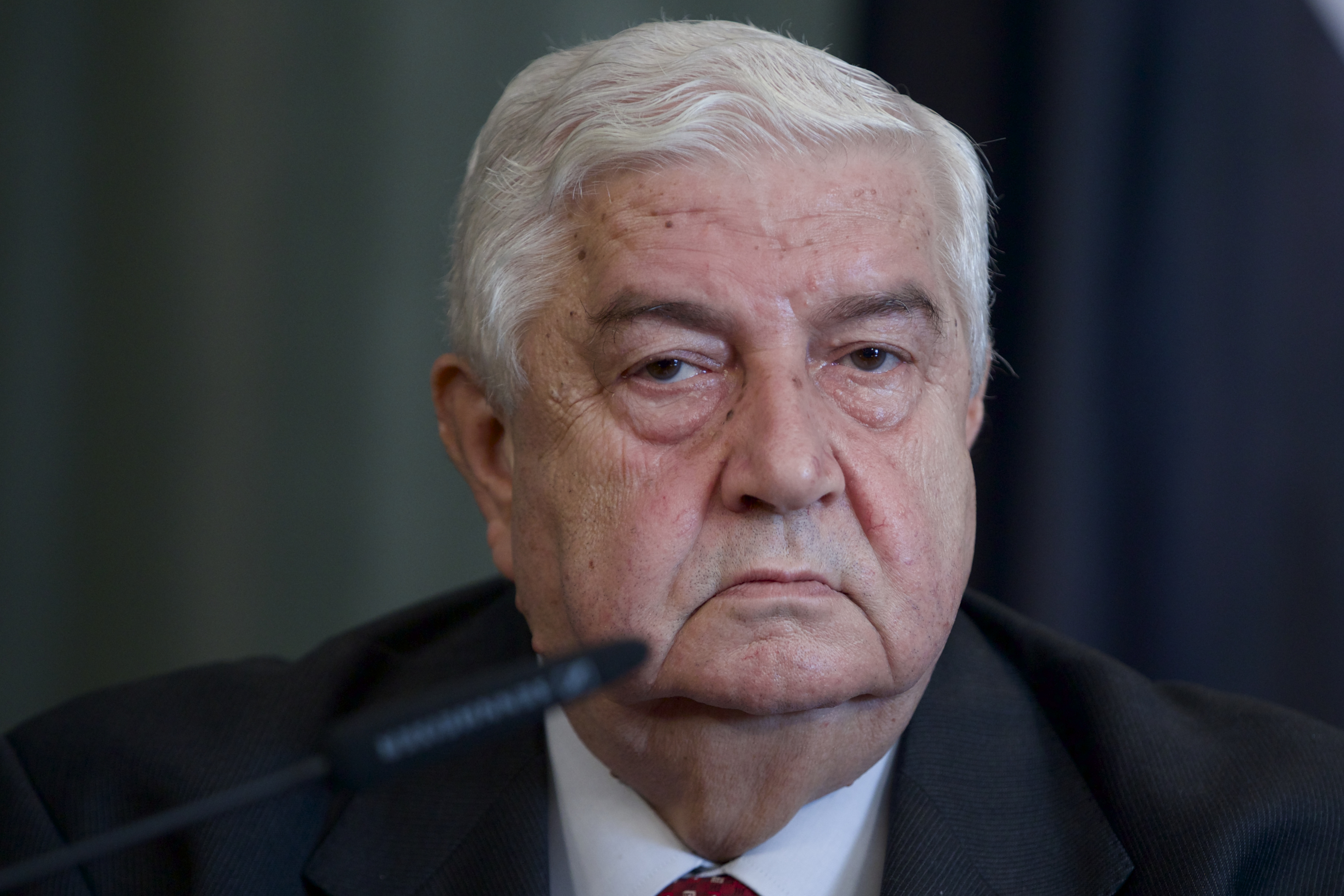 MOSCOW Syria on Monday quickly welcomed a call from Russia, its close ally, to place Syrian chemical arsenals under international control, then destroy them to avert a U.S. strike, but did not offer a time frame or any other specifics.

The statement by Syrian Foreign Minister Walid al-Moallem appeared to mark the first official acknowledgement by Damascus that it possesses chemical weapons and reflected what appeared to be an attempt by Syrian President Bashar Assad to avoid the U.S. military attack.

But it remained to be seen whether the statement represented a genuine goodwill gesture by Syria or simply an attempt to buy time.

"Syria welcomes the Russian proposal out of concern for the lives of the Syrian people, the security of our country and because it believes in the wisdom of the Russian leadership that seeks to avert American aggression against our people," al-Moallem said during a visit to Moscow, where he held talks with his Russian counterpart, Sergey Lavrov.

However, al-Moallem, would not give any further details in his brief statement and didn't take any questions from reporters.

Moallem's statement came a few hours after U.S. Secretary of State John Kerry said Assad could resolve the crisis surrounding the alleged use of chemical weapons by his forces by surrendering control of "every single bit" of his arsenal to the international community by the end of the week.

In Washington, U.S. officials said they would take a "hard look" at the proposal but doubted that Syria would carry out such a plan. State Department spokeswoman Marie Harf said the U.S. would consider the proposal with "serious skepticism" because it might be a stalling tactic. She said Syria had consistently refused to destroy its chemical weapons in the past.

Former Secretary of State Hillary Rodham Clinton said she supports President Barack Obama's call for a military strike, adding that any move by Syria to surrender its chemical weapons to international control would be an "important step."

French Foreign Minister Laurent Fabius said Lavrov's proposal "deserves close examination" but the chemical weapons would have to be placed under international control in a short time and those responsible for "the chemical massacre" must be punished.

Asked by CBS News about Lavrov's announcement that Russia would press Syria to place chemical weapons under international control after Syrian President Bashar al-Assad told Charlie Rose that he could not even acknowledge their weapons stockpile, the U.N. secretary-general said on Monday that he welcomed the proposal and would press Syria to join the chemical weapons convention, CBS News foreign affairs analyst Pamela Falk reports.

The Secretary General, Ban Ki-moon said that if the U.N. inspector's report confirms the use of chemical weapons, "then this would surely be something around which the Security Council could unite in response -- and indeed something that should merit universal condemnation."

But, Falk reports, the Secretary General was dismissive and critical of foreign intelligence on the August chemical weapons attack, saying, "I do know there has been significant speculation regarding a major use of chemical agents on August 21st leading to the death of hundreds of civilian people."

Al-Moallem and Lavrov didn't make any immediate reference to Kerry's statement when they spoke to the media after their talks, but a few hours later Lavrov went before cameras to say that Moscow would urge Syria to quickly place its chemical weapons under international control and then dismantle it.

Lavrov, who held talks with al-Moallem in Moscow earlier in the day, said he expected a quick positive answer from Damascus.

"If the establishment of international control over chemical weapons in that country would allow avoiding strikes, we will immediately start working with Damascus," Lavrov said.

"We are calling on the Syrian leadership to not only agree on placing chemical weapons storage sites under international control, but also on its subsequent destruction and fully joining the treaty on prohibition of chemical weapons," he said.

The surprise series of statements from top U.S., Russian and Syrian diplomats followed media reports alleging that Russian President Vladimir Putin, who discussed Syria with President Barack Obama during the Group of 20 summit in St. Petersburg last week, had sought to negotiate a deal that would have Assad hand over control of chemical weapons.

Putin himself said Friday at a news conference marking the summit's end that he and Obama discussed some new ideas regarding a peaceful settlement of the crisis and instructed Kerry and Lavrov to work out details.

Speaking Monday, Lavrov denied that Russia was trying to sponsor any deal "behind the back of the Syrian people."

The Russian move comes as Obama, who has blamed Assad for killing hundreds of his own people in a chemical attack outside Damascus last month, is pressing for a limited military strike against the Syrian government. The Syrian regime has denied launching the attack, insisting along with Russia that the attack was launched by the rebels to drag the U.S. into the civil war.

On Monday, the White House said 14 more nations have signed on to a statement blaming Assad's government for a chemical weapons attack and calling for a strong international response. That means the list has grown to 25 from the 11 - including the U.S. - who initially signed on.

Lavrov and al-Moallem said after their talks that U.N. chemical weapons experts should complete their probe and present their findings to the U.N. Security Council.

Al-Moallem said his government was ready to host the U.N. team, and insisted that Syria is ready to use all channels to persuade the Americans that it wasn't behind the attack. He added that Syria was ready for "full cooperation with Russia to remove any pretext for aggression."

Neither minister, however, offered any evidence to back their claim of rebel involvement in the chemical attack.

Lavrov said Russia will continue to promote a peaceful settlement and may try to convene a gathering of all Syrian opposition figures to join in negotiations. He added that a U.S. attack on Syria would deal a fatal blow to peace efforts.

Lavrov wouldn't say how Russia could respond to a possible U.S. attack on Syria, saying: "We wouldn't like to proceed from a negative scenario and would primarily take efforts to prevent a military intervention."

Putin said Moscow would keep providing assistance to Syria in case of U.S. attack, but he and other Russian officials have made clear that Russia has no intention of engaging in hostilities.