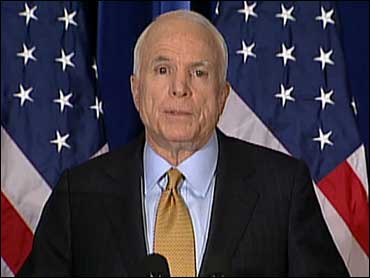 The economic crisis and raw politics threatened to derail the first presidential debate as John McCain challenged Barack Obama to delay the Friday forum and join forces to help Washington fix the financial mess. Obama rebuffed his GOP rival, saying the next president needs to "deal with more than one thing at once."

The White House rivals maneuvered to claim the leadership role on the financial crisis that has overshadowed their campaign six weeks before Election Day. Obama said he would proceed with his debate preparations while consulting with bailout negotiators and Treasury Secretary Henry Paulson. McCain said he would stop all advertising, fundraising and other campaign events to return to Washington and work for a bipartisan solution.

"It's my belief that this is exactly the time when the American people need to hear from the person who, in approximately 40 days, will be responsible for dealing with this mess," Obama said at a news conference in Clearwater, Fla. "It's going to be part of the president's job to deal with more than one thing at once."

But McCain said they must focus on a bipartisan solution to the nation's financial woes as the Bush administration's $700 billion bailout proposal seemed headed for defeat. If not, McCain said ominously, credit will dry up, people will no longer be able to buy homes, life savings will be at stake and businesses will not have enough money to pay workers.

"We could move [the debate] up a few days," McCain told CBS Evening News anchor Katie Couric in an exclusive interview. "Because we know we have to act … We have to show the markets, the world markets, that we're going to address this issue seriously."

Sen. Lindsey Graham, McCain's representative in debate negotiations, said McCain will not attend the debate "unless there is an agreement that would provide a solution" to the financial crisis. Graham, R-S.C., told The Associated Press that the agreement would have to be publicly endorsed by Obama, McCain, the White House and congressional leaders, but not necessarily given final passage by the House and Senate.

Asked whether the debate could go forward if McCain doesn't show, Obama spokesman Robert Gibbs replied, "My sense is there's going to be a stage, a moderator, an audience and at least one presidential candidate."

Their competing positions came after the two senators spoke privately, each trying to portray himself as the bipartisan leader in a time of crisis.

McCain beat Obama to the punch with the first public statement. He said he had spoken to President Bush and asked him to convene a leadership meeting in Washington that would include him and Obama. Bush did just that, announcing Wednesday night during a national television address that he had invited both candidates and key congressional leaders to the White House for a Thursday meeting on the financial crisis. Obama indicated he would attend.

Even as McCain said he was putting the good of the country ahead of politics, his surprise announcement was clearly political. It was an attempt to try to outmaneuver Obama on an issue in which he's trailing, the economy, as the Democrat gains in polls. He quickly went before TV cameras minutes after speaking with Obama and before the two campaigns had hammered out a joint statement expressing that Congress should act urgently on the bailout.

Also of note, Senate Majority Leader Harry Reid spoke with McCain and told him "it wouldn't be helpful for him to come back to Washington," sources told CBS News.

And while McCain's campaign said he would "suspend" his campaign, it simply will move to Washington knowing the spotlight will remain on him no matter where he is.

"After days of appearing to be on the defensive over the economic crisis, McCain is making a surprise move while at the same time underlining his call for both parties to work together," said CBSNews.com senior political editor Vaughn Ververs. "From a campaign perspective, it's potentially a bold move but not one without risk if it's seen by voters as gimmicky or the ultimate result ends up unpopular." (Read more analysis from Ververs)

Obama, too, made a political calculation by rejecting McCain's challenge while trying to still appear on top of the problem. Obama repeatedly stressed at his news conference that he called McCain first to propose that they issue a joint statement in support of a package to help fix the economy as soon as possible. He said McCain called back several hours later, as Obama was leaving a rally in Florida, and agreed to the idea of a statement but also said he wanted to postpone the debate and hold joint meetings in Washington.

Obama said he suggested they first issue a joint statement showing bipartisanship in support of a package that would include greater oversight, relief for homeowners and taxpayers and limits on executive compensation, reports CBS News correspondent Chip Reid.

"When I got back to the hotel, he had gone on television to announce what he was going to do," Obama said.

McCain said he would return to Washington after addressing former President Clinton's Global Initiative session in New York Thursday. He canceled his planned appearance Wednesday on CBS' "Late Show With David Letterman" program and a meeting with the prime minister of India.

The Commission on Presidential Debates said it was moving forward with plans for the debate. "We believe the public will be well served by having all of the debates go forward as scheduled," it said in a statement.

The University of Mississippi said it was going forward with preparation for the debate in Oxford. "We are ready to host the debate, and we expect the debate to occur as planned," the school said, adding that it had received no notification of any change in the timing or venue.

The McCain campaign initially said it would suspend all advertising and campaign events until a workable deal is reached on the bailout proposal - but only if the Obama campaign agreed to do the same. Later, the campaign said it would move ahead regardless of whether Obama agrees.

McCain's running mate, Sarah Palin, also was canceling her limited campaign events. Palin said in an interview with CBS Evening News Wednesday that the country could be headed for another Great Depression if Congress doesn't reach a solution.

McCain adviser Steve Schmidt would not say how long the suspension would last but indicated it would go through the weekend, in order to reach agreement on a deal before the markets open on Monday.

McCain has struggled with how to handle the financial situation, which he might escape with modest political damage if he and Obama could reach some type of accord on the matter.

Scores of congressional Republicans have hinted this week they may oppose the proposed $700 billion bailout even though it is Bush's priority. Senate Majority Leader Harry Reid, D-Nev., pointedly suggested that Democratic lawmakers could not be expected to back it if McCain did not publicly do so.

That leaves McCain with two unpalatable choices. He can oppose a major Republican initiative that the administration says is essential to preventing a full-blown recession, and risk heavy blame if the prediction comes true. Or he can vote for an extraordinarily costly bailout, which many Americans seem to resent, just when polls show him falling farther behind Obama.

Several GOP lawmakers and strategists said they see no way that McCain can oppose the main elements of the bailout plan and present himself as a bold leader. He must say, "we need to get this done for the future of our country," said John Feehery, a former aide to top Republican lawmakers. "Country first," Feehery said, noting McCain's campaign slogan.

But McCain might reap few political rewards for such a move.

Rep. Tom Cole, R-Okla., said he has not found any Republican colleagues who say the proposed bailout "is popular in their district."

Of course, Obama also risks angry voter reactions if he supports the bailout plan. But he could frame his stand as bipartisan statesmanship, whereas McCain's vote could be spun as another example of his siding with Bush, a major impediment to his campaign.