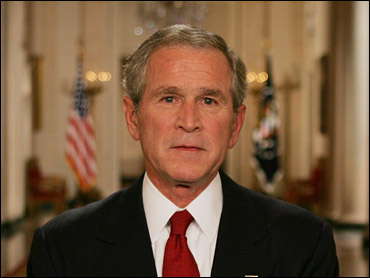 He spoke just after inviting Democratic Sen. Barack Obama and Republican Sen. John McCain, one of whom will inherit the economic mess in four months, and key congressional leaders to an extraordinary White House meeting Thursday afternoon to hammer out a compromise.

"Without immediate action by Congress, American could slip into a financial panic and a distressing scenario would unfold," Bush said in a prime-time address from the White House East Room that he hoped would help rescue his tough-sell bailout package.

Democrats and Republicans were nearing an agreement on the rescue legislation, the most sweeping government intervention in the market since the Great Depression, and set a meeting early Thursday to begin drafting a bipartisan bill.

With the administration's original proposal considered dead in Congress - even McCain called it flawed - top House leaders issued an upbeat statement late Wednesday saying there was progress toward revised legislation that could pass.

"We are committed to continuing to work cooperatively and on a bipartisan basis to safeguard the interests of the American taxpayers," said Speaker Nancy Pelosi, D-Calif., and House Republican leader John Boehner of Ohio.

Rep. Barney Franks, D-Mass., a lead negotiator on the package, said given the progress of the talks, the White House meeting scheduled for Thursday afternoon was a distraction.

"We're going to have to interrupt a negotiating session tomorrow between the Democrats and Republicans on a bill where I think we are getting pretty close, and troop down to the White House for their photo op," said Frank, the House Financial Services Committee chairman. "I wish they'd checked with us."

A new CBS News/New York Times Poll shows the president's rating on handling the economy has fallen to its lowest level ever. Only 16 percent of Americans approve of the job he is now doing on this issue, while 76 percent disapprove.

The administration has endorsed several of the changes that have been demanded in recent days from the right and left, including limits on the pay packages of executives who take government aid. But he warned that he would draw the line at regulations he determines would hamper economic growth.

"It should be enacted as soon as possible," the president said, arguing that "our entire economy is in danger."

Bush's address Wednesday was designed to explain the package to the American public, but also to keep pressure on frustrated and angry lawmakers to work out a bipartisan deal quickly.

The president said the goal is to allow the government to buy up troubled assets from struggling financial institutions so that credit can start flowing again. He said the rescue is aimed at helping the country, not individual companies.

"With the situation becoming more precarious by the day, I faced a choice: to step in with dramatic government action or to stand back and allow the irresponsible actions by some to undermine the financial security of all," Bush said.

The president called Obama around 7:30 p.m. on Wednesday, shortly before the address, to invite the Democratic presidential nominee to the White House meeting Thursday, reports CBS News White House correspondent Mark Knoller. White House aides extended the invitations to McCain and to GOP and Democratic leaders from Capitol Hill.

According to a spokesman, Obama agreed to the meeting and voiced support for the president's address.

"While Sen. Obama believed that the administration's initial proposal was flawed and unacceptable to the American taxpayer, he was heartened tonight that the president seemed to be moving in the direction of the principles that Senator Obama outlined over the last week, including limits on CEO pay, independent oversight, and taxpayer protection. He was also encouraged that the president suggested strengthening an outdated regulatory structure that led to this crisis, something that Sen. Obama specifically proposed last March," said Obama spokesman Bill Burton.

Intensive, personal wheeling and dealing is not usually Bush's style as president, unlike some predecessors. He does not often call or meet with individual lawmakers to push a legislative priority.

The meltdown among several financial institutions and intense negotiations with Congress over the administration's requested $700 billion bailout package led the president to return to Washington early from a three-day whirl of international meetings in New York. He also canceled plans to spend the afternoon in Florida raising campaign cash for Republicans.

The package has been met with deep skepticism on Capitol Hill, especially from conservatives in Bush's own party unhappy with the high price tag and unprecedented private-sector intervention. Though there is general agreement that something must be done, the administration has made big concessions almost daily based on demands from the right and left. The timing and even the size of the package remained in doubt.

"The cold on Wall Street could infect Main Street," Perino said. People "are concerned about their homes, their education funds, their retirement accounts, their savings."

In a move welcome at the White House, Obama and McCain Wednesday evening issued a joint statement urging lawmakers to act.

"Now is a time to come together - Democrats and Republicans - in a spirit of cooperation for the sake of the American people," they continued. "The plan that has been submitted to Congress by the Bush Administration is flawed, but the effort to protect the American economy must not fail."

Added Obama and McCain: "This is a time to rise above politics for the good of the country. We cannot risk an economic catastrophe. Now is our chance to come together to prove that Washington is once again capable of leading this country."

However, the Oval Office rivals were not putting politics aside entirely. McCain asked Obama to agree to delay their first debate, scheduled for Friday, to deal with the meltdown. Obama said the debate should go ahead.

The White House has struggled to determine how to deploy Bush.

As the financial crisis mushroomed over the weekend of Sept. 13, the president generally stayed out of the limelight, letting Treasury Secretary Henry Paulson and Federal Reserve Chairman Ben Bernanke take the lead with reporters, lawmakers and the public. Bush remained silent for days.

Since Thursday, however, the president has talked about the crisis almost daily, although usually briefly, and yet he still has had trouble breaking into the debate. News coverage has barely mentioned Bush's comments.

The decision to use what is perhaps a president's largest available weapon - the ability to demand a presence on evening television screens nationwide, from a setting with the ultimate bully-pulpit power - is one sign that the rescue package still faces daunting hurdles.

The economic crisis is almost certain to overshadow the rest of Bush's four months left in office and could hugely impact his legacy. It has been assumed that the long-term view of Bush's presidency was to be shaped largely by Iraq, Hurricane Katrina and the Sept. 11 attacks. Now, the dire economic problems and the aftermath of the government's attempted solution will certainly be added to that list.