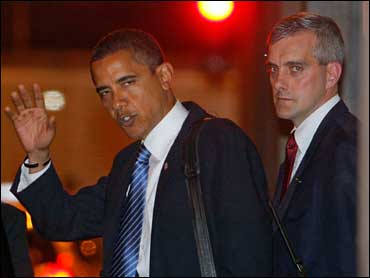 President-elect Obama said Friday that the country is facing the greatest economic challenge in a lifetime and "we're going to have to act swiftly to resolve it."

In his first news conference since winning the presidency Tuesday, Mr. Obama said Congress must pass an economic stimulus measure either before or just after he takes office in January. He also said unemployment benefits need to be extended.

But he deferred to President Bush and his economic team on major decisions in the coming weeks.

"The United States has only one government and one president at a time," Mr. Obama said.

Mr. Obama spoke after he and Vice President-elect Joe Biden met privately with economic experts to discuss ways to stabilize the troubled economy. Biden, the advisers and Mr. Obama's new chief of staff, Rahm Emanuel, stood behind him as he spoke for 20 minutes from a podium that said "the Office of the President Elect" at a hotel in his home town.

Mr. Obama calmly fielded questions about the economy, Iran and his family's search for a pet dog. No matter the question, he replied with caution - and one flash of self-deprecating humor when discussing the dog.

His family is looking for a dog that will not trigger his daughter Malia's allergies. Ideally, he said it would come from an animal rescue shelter, but "obviously, a lot of shelter dogs are mutts like me."

The economic crisis, however, dominated the news conference, and Mr. Obama said, "I do not underestimate the enormity of the task that lies ahead."

More evidence of a recession came Friday when the government reported that the unemployment rate had jumped from 6.1 percent in September to 6.5 percent in October. Despite dour third-quarter reports from Ford and General Motors, stocks rose some after two days of heavy losses.

His transition to power and early days in office, if not the entire first year of his presidency, almost certainly will be devoted to finding ways to revive the dismal economy.

"Immediately after I become president I will confront this economic crisis head-on by taking all necessary steps to ease the credit crisis, help hardworking families, and restore growth and prosperity," Mr. Obama said.

He said his focus would be on producing jobs and mentioned actions to help the auto industry and small business and aid for state and local governments so they aren't forced to lay off workers or raise taxes.

Mr. Obama also left the door open to the possibility economic conditions might prompt him to change his tax plan that would give a break to most families but raise taxes on those making more than $250,000 annually.

"I think that the plan that we've put forward is the right one, but, obviously, over the next several weeks and months, we're going to be continuing to take a look at the data and see what's taking place in the economy as a whole," Mr. Obama said.

Mr. Obama told reporters that he's confident that "a new president can have an enormous impact."

On other topics, Mr. Obama said:

He will review a letter from Iran's leader and respond appropriately. It's not something "that we should simply do in a knee-jerk fashion," he said. Mr. Obama said he wants to be careful to send the signal to the world that "I'm not the president and I won't be until Jan. 20."

He will move with all deliberate haste to fill Cabinet posts. He said when he chose Emanuel as chief of staff: "We thought it through" and he wants to do the same with other top appointees to avoid making mistakes.

Mr. Obama said he appreciated the cooperation Mr. Bush has offered in smoothing his transition to the White House and the Republican's "commitment that his economic policy team keep us informed." He expressed gratitude to Mr. Bush for inviting him and his wife, Michelle, to the White House on Monday.

In the spirit of bipartisanship, Mr. Obama said he expected to have a substantive conversation with Mr. Bush at that time and that "I am not going to anticipate problems."

As he prepares to join an exclusive club of presidents, Mr. Obama said: "I've spoken to all of them that are living" and has reread some of President Lincoln's writings.

Mr. Obama and Biden met before the news conference with the transition economic advisory board, a high-powered collection of business, academic and government leaders. They included Lawrence Summers, who some have mentioned as a candidate for Treasury secretary, a post he held in the Clinton administration; Michigan Gov. Jennifer Granholm, whose state has been hit hard by losses in the auto industry; Google CEO Eric Schmidt; and former Federal Reserve Chairman Paul Volcker.

"I would hope that next year we will start to see a turn, but again, these problems were not made quickly, Summers added. "They're not going to be fixed overnight but what we need is to move aggressively but, at the same time, be steadfast.

Other participants in the meeting included executives from Xerox Corp., Time Warner Inc.; and the Hyatt hotel company. Investor Warren Buffett called in by telephone.

Mr. Obama has been meeting privately with his transition team, receiving congratulatory phone calls from U.S. allies and intelligence briefings, and making decisions about who will help run his government.

His first choice, for White House chief of staff, was Rahm Emanuel, a fiery partisan unafraid of breaking glass and hurting feelings. The choice of Emanuel is a significant departure from the soft-spoken, low-key aides that "No-Drama Obama" surrounded himself with during the campaign. And transition chief John Podesta, like Emanuel, is a former top aide to President Clinton and a tough partisan infighter, though less bombastic than the new chief of staff.

The selections are telling for Mr. Obama, who campaigned as a nontraditional, almost "post-partisan" newcomer. People close to him say the selections show he is aware of his strengths and weaknesses, and knows what he needs to be successful as he shifts from campaigning to governing.

One person frequently mentioned for a Cabinet post, Pennsylvania Gov. Ed Rendell, will not be available until 2011, officials close to him said Friday. Rendell has two years left of his term, and Lt. Gov. Catherine Baker Knoll, a Democrat, is ailing. Next in line to be governor is the Republican president pro tempore the state Senate.

Rather than take the chance that the GOP would gain control of the governor's office, Rendell has signaled he will stay put for the time being.

On Friday morning, Mr. Obama and his wife, Michelle, attended a parent-teacher conference at the University of Chicago Lab School where their daughters, Malia and Sasha, are students.

Mr. Obama planned to stay home through the weekend, with a blackout on news announcements so he and his staff can rest after the grueling campaign. He is planning a family getaway to Hawaii in December before they move to the White House, and to honor his grandmother, Madelyn Dunham, who died Sunday at her home there.