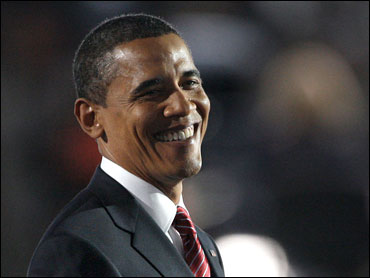 Surrounded Thursday night by an enormous, adoring crowd, Barack Obama promised a clean break from the "broken politics in Washington and the failed policies of George W. Bush," as he embarked on the final lap of his audacious bid to become the nation's first black president.

"America, now is not the time for small plans," the 47-year-old Illinois senator told an estimated 84,000 people packed into Denver's Invesco Field, a huge football stadium at the base of the Rocky Mountains. (Obama's Speech:

He vowed to cut taxes for nearly all working-class families, end the war in Iraq and break America's dependence on Mideast oil within a decade. By contrast, he said, "John McCain has voted with President Bush 90 percent of the time," a scathing indictment of his Republican rival - on health care, education, the economy and more.

"Sen. McCain likes to talk about judgment, but really, what does it say about your judgment when you think George Bush was right more than 90 percent of the time?"

He said it's time to change leadership in Washington after two terms of the Bush administration. "On Nov. 4," he said, "we must stand up and say: Eight is enough."

"Obama took sky-high expectations and brought them down to ground level with a tremendous political speech that tried to connect with the concerns of average American voters," said CBSNews.com senior political editor Vaughn Ververs. "He managed to mix boiler-plate policy proposals with American stories and values into a road map for the fall campaign. It will take a few days before we know whether voters think Obama hit a home run here in Denver tonight, but by any measure, it was a big success." (Read Ververs' analysis of the speech)

"I think it was a fine speech," said CBS News chief Washington correspondent Bob Schieffer. "He made the argument that he is qualified to be commander-in-chief - which is one of the criticisms that has been made against him - because of his judgment, not his experience. And, again, he questioned John McCain's judgment. But if this speech is successful for him, it will be because he got through to people who are worried about their kids' education, who are worried about whether they're going to have health care and he talked a lot about that."

"For over two decades, he's subscribed to that old, discredited Republican philosophy - give more and more to those with the most and hope that prosperity trickles down to everyone else," Obama said. "In Washington, they call this the Ownership Society, but what it really means is, you're on your own. Out of work? Tough luck. No health care? The market will fix it. Born into poverty? Pull yourself up by your own bootstraps - even if you don't have boots. You're on your own."

"Well it's time for them to own their failure," he added. "It's time for us to change America."

Polls indicate a close race between Obama and McCain, the Arizona senator who stands between him and a place in history. On a night 45 years after Martin Luther King Jr. delivered his "I have a Dream Speech," Obama made no overt mention of his own race.

"I realize that I am not the likeliest candidate for this office. I don't fit the typical pedigree" of a presidential candidate. That was as close as he came to the long-smoldering issue that may well determine the outcome of the election.

Fireworks lit the night sky as Obama accepted the cheers of his supporters. His wife, Michelle, and their daughters Malia and Sasha joined him, and the country music sounds of "Only in America" filled the stadium.

Campaigning as an advocate of a new kind of politics, he suggested at least some common ground was possible on abortion, gun control, immigration and gay marriage.

Obama delivered his 44-minute nominating acceptance speech in an unrivaled convention setting, before a crowd of unrivaled size - the filled stadium, the camera flashes in the night, the made-for-television backdrop that suggested the White House, and the thousands of convention delegates seated around the podium in an enormous semicircle.

Obama and his running mate, Sen. Joseph Biden of Delaware, leave their convention city on Friday for Pennsylvania, first stop on an eight-week sprint to Election Day.

Rep. John Lewis of Georgia spoke from the convention stage of the anniversary of King's memorable speech.

"Tonight we are gathered here in this magnificent stadium in Denver because we still have a dream," said the Georgia lawmaker, who marched with King, supported Obama's primary rival, Hillary Rodham Clinton, then switched under pressure from younger black leaders in his home state and elsewhere.

Obama's aides were interested in a different historical parallel from King - Obama was the first to deliver an outdoor convention acceptance speech since John F. Kennedy did so at the Los Angeles Coliseum in 1960.

In his speech, Obama pledged to jettison Mr. Bush's economic policy, and replace it with his own designed to help hard-pressed families.

"I will cut taxes for 95 percent of all working families. Because in an economy like this, the last thing we should do is raise taxes on the middle class," he said.

The speech didn't mention it, but Obama has called for raising taxes on upper-income Americans to help pay for expanded health care and other domestic programs.

He did not say precisely what he meant by breaking the country's dependence on Mideast oil, only that Washington has been talking about doing it for 30 years, "and John McCain has been there for 26 of them."

Criticized by the GOP for his thin foreign policy portfolio, Obama said he welcomed a national security debate with McCain.

He said McCain had no standing on foreign policy, not after backing the Iraq war from the start and rejecting timetables for withdrawal now accepted by Mr. Bush. "John McCain stands alone in his stubborn refusal to end a misguided war," he said.

Obama's pledge to end the war in Iraq responsibly was straight from his daily campaign speeches.

"I will rebuild our military to meet future conflicts. But I will also renew the tough, direct diplomacy that can prevent Iran from obtaining nuclear weapons," he added.

As he does so often while campaigning, Obama also paid tribute to McCain's heroism - the 72-year-old Arizona senator was a prisoner of war in Vietnam - then assailed him.

"Sen. McCain likes to talk about judgment, but really, what does it say about your judgment when you think George Bush was right more than 90 percent of the time?

Former Vice President Al Gore picked up on the same theme. "If you like the Bush-Cheney approach, John McCain's your man. If you want change, then vote for Barack Obama and Joe Biden," he declared.

The much-discussed stage built for the program was evocative of the West Wing at the White House, with 24 American flags serving as a backdrop. A blue carpeted runway jutted out toward the infield, and convention delegates ringed the podium. Thousands more sat in stands around the rim of the field.

The list of entertainers ran to Sheryl Crow, Stevie Wonder and will.i.am, whose Web video built around Obama's "Yes, we can" rallying cry quickly went viral during last winter's primaries.

In a novel bid to extend the convention's reach, Obama's campaign decided to turn tens of thousands of partisans in the stands into instant political organizers.

They were encouraged to use their cell phones to send text messages to friends as well as to call thousands of unregistered voters from lists developed by the campaign.

Before Obama, Al Gore spoke to the crowd at the stadium. He said that the 2008 election is close because defenders of the status quo "are desperately afraid of the change Barack Obama represents."

Addressing tens of thousands, Gore said that when he ran against Mr. Bush, some people saw little difference between them and thought the outcome wouldn't matter much. "But here we all are in 2008 and I doubt anyone would argue now that election didn't matter."

McCain was in Ohio as Obama spoke, and after a series of sharply negative convention week television commercials, his campaign aired a one-night advertisement that complimented Obama and noted the speech occurred on the anniversary of King's famous address.

"Senator Obama, this is truly a good day for America. Too often the achievements of our opponents go unnoticed. So I wanted to stop and say, 'Congratulations,"' McCain says in the ad. (Watch the ad)

"How perfect that your nomination would come on this historic day. Tomorrow, we'll be back at it. But tonight Senator, job well done."