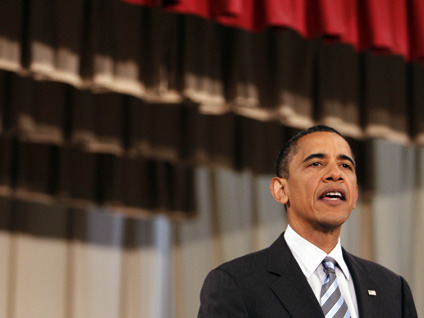 Taking a pause from his administration's focus on the Gulf oil spill, President Obama today sought to assure skeptical seniors that they will see immediate benefits from recently-passed health care reforms and that their Medicare benefits will not change.

"Medicare isn't just something you're entitled to when you reach 65, it's something that you've earned," the president told seniors during a national tele-town hall meeting held at a senior center in Wheaton, Maryland. "It's a sacred and inviolable trust between you and your country."

Some of the strongest resistance last year to Mr. Obama's controversial health care reforms came from seniors worried that bureaucrats would "pull the plug on Grandma" and that cuts to Medicare would impact their benefits. After the health care legislation passed, the president promised to continue to "sell" his reforms to the American people, including seniors, who are some of the nation's most reliable voters.

Mr. Obama said today that the "hysterical claims" about this law have "no anchor in reality" and that seniors' Medicare benefits will not change.

He also highlighted that beginning this week, seniors will start receiving rebate checks if they fall into the Medicare prescription drug coverage gap, known as the "doughnut hole." More than 4 million seniors will receive rebate checks by the end of this year, and the doughnut hole is expected to be entirely closed by 2020.

The president also announced that Health and Human Services Secretary Kathleen Sebelius and Attorney General Eric Holder are heading up a new effort to crack down on Medicare fraud, called the Health Care Fraud Prevention and Enforcement Action Team (HEAT).

While the administration has largely been focused on responding to the Deepwater Horizon oil spill in the Gulf of Mexico and determining "whose ass to kick" over the disaster, Democrats in Washington still want the president to continue addressing health care reform. As Congress enters the midterm election season, both parties are anticipating that views of the legislation will impact the results.

Republicans in about a half-dozen states are seeking to capitalize on opposition to the new law by increasing voter turnout with anti-health reform ballot initiatives, the Hill reports.

Mr. Obama blasted the Republicans' response to his reform efforts, saying that while the GOP put forward an alternative proposal, "they never seriously advanced it" because they knew it would be unpopular.

The president added that his reforms prove "we're still a nation that keeps its promises to our seniors... [and] still a people that are able to meet big challenges."