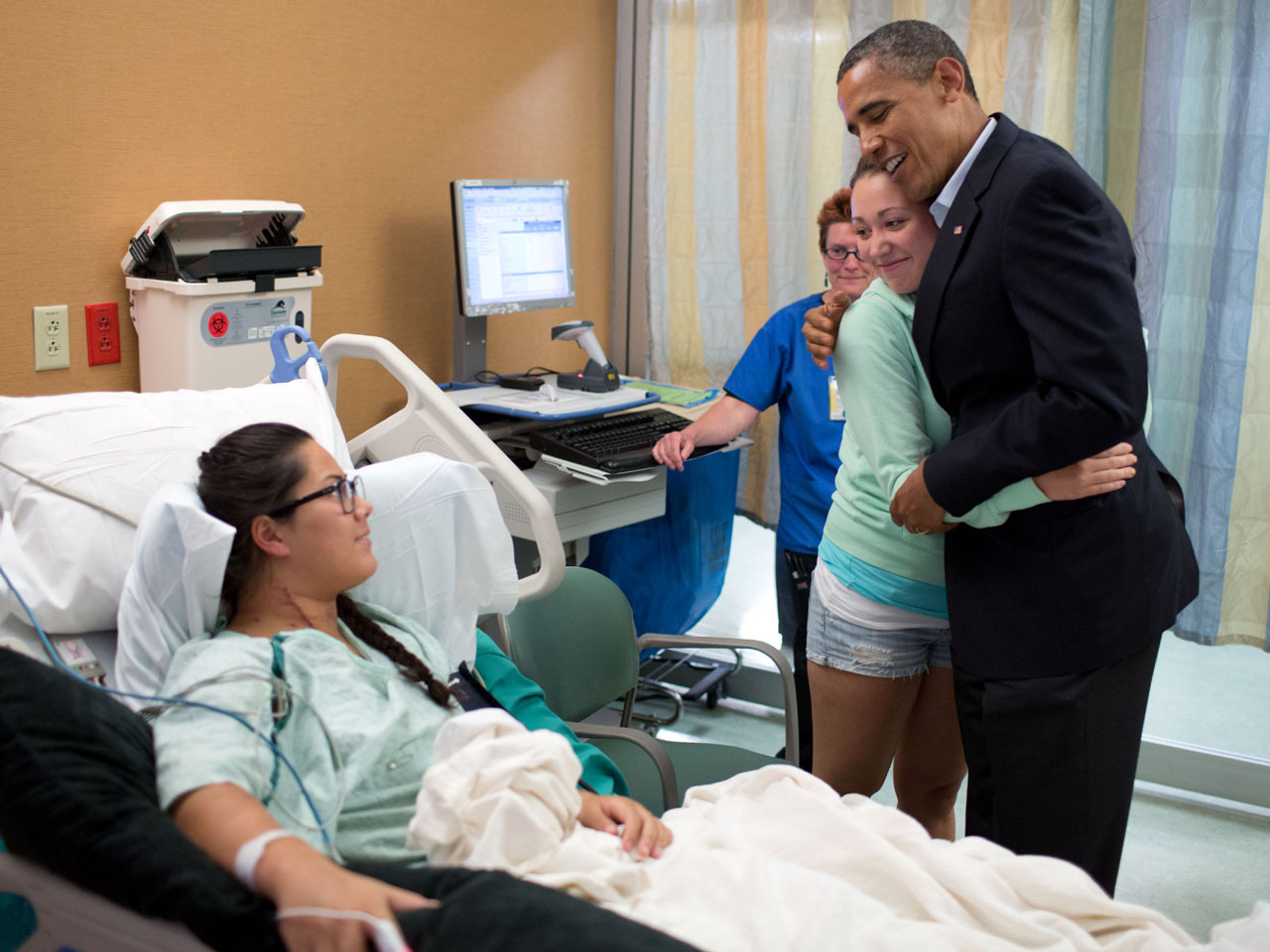 (CBS News) During a visit to Aurora, Colo., Sunday, President Obama met with victims of Friday's mass shooting at a movie theater, which killed 12 people and injured 58 others.

Mr. Obama, accompanied by Gov. John Hickenlooper, Aurora Mayor Steve Hogan and other local officials, spoke to victims and victims' families at the University of Colorado Hospital in Aurora, where 23 of the victims were taken in the aftermath of the shooting and 10 remained Sunday.

"I confessed to them that words are always inadequate," Mr. Obama said, following the meeting, but added that his "main task was to serve as a representative of the entire country and we think of them at this moment and we will continue to think of them each and every day."

Peter Burns, a Denver radio host and a friend of Jessica Ghawi, who was killed in Friday's massacre, wrote about Mr. Obama's visit on Twitter.  Burns said that he heard a request that was repeated more than once: pleas for the media focus more on the victims and not on the suspect, James Holmes. The president promised to try to help on that front, Burns said.

Jessica Ghawi's brother, Jordan, wrote on Twitter, after meeting with Mr. Obama, "Sat down with President Obama. He has been incredible. He ... has agreed not to mention the shooter's name."

The president said after his meeting, "I also tried to assure them that this perpetrator has received a lot of attention, that attention will fade away. ... In the end... what will be remembered are the good people who were impacted by this tragedy."

He said he was moved by the story of survivors Allie Young, a 19-year-old who was shot in the neck, and her best friend, Stephanie Davies, 21, who saved Young's life by keeping pressure on her wound as bullets flew.

Mr. Obama said they "represent what's best in us."

"Because of Stephanie's timely actions - I just had a conversation with Allie downstairs and she's going to be fine," he said.

"I don't know how many people of any age would have the presence of mind to do what Stephanie did," the president said, adding, "out of this darkness, a brighter day is going to come."

On a lighter note, Burns added on Twitter, when one victim told Mr. Obama that he lost his driver's license during the shooting and was worried about being able to get on a plane to get home, the president quipped, "I have a little pull with the TSA."

When asked how the shooting will affect the presidential campaign, Obama campaign spokeswoman Jen Psaki said, "[T]his is so fresh and new for so many people, including the people in Colorado, who are still mourning the loss of their loved ones, will be for a long time, many people are still recovering, we're still learning what exactly happened here and more details -- that's where our focus is right now."

"And so it's really too early to say how this will play. ... we're just taking it day by day," Psaki said.

She added that a Tuesday campaign rally in Portland, Ore., was canceled, explaining that one reason was because "the nature of the tragedy and the feeling, while there's not a playbook for this, that given the tone of grassroots [campaign] events, it was the right step to take."

"Clearly, the tragic events of last Thursday have changed ... the tone" of the campaign, Psaki said and noted that the negative TV ads the campaign stopped running in Colorado on Friday would remain off the air for the rest of the week. Meantime, Mitt Romney's campaign told CBS News their ads in Colorado are down "until further notice."

The shooting has thrust the gun control debate back into the spotlight. White House Press Secretary Jay Carney was asked if Mr. Obama feels current gun laws are sufficient to prevent shootings like Friday's.

The president "believes we need to take steps that protect Second Amendment rights of the American people but that ensure that we are not allowing weapons into the hands of individuals who should not, by existing law, obtain those weapons," Carney said.

After putting politics aside for the past couple of days, the president stopped in Colorado en route to the west coast, where he'll resume his official schedule. Monday, he will speak to the Veterans of Foreign Wars convention in Reno, Nev., where he's expected to discuss national security and the fight against terrorism - and not spend time criticizing his Republican rival. Following that speech, Mr. Obama will attend several fundraisers in California, Oregon and Washington State.

Romney was off the campaign trail until Sunday, after addressing the shooting on Friday in New Hampshire. He's in California through Monday for campaign events and will address the VFW in Reno, Nev., on Tuesday before traveling to London for the Olympics opening ceremonies. Following his trip to England, he will also make stopsin Poland and Israel.

At a fundraiser in San Francisco Sunday night, the event began with a moment of silence.  Romney referenced the president's trip to Aurora saying it's "the right thing for the President to be doing on this day. I appreciate that."

"I will note that my remarks here today will not be as partisan as normal," he continued.

"We obviously have heavy hearts. It is a reminder of loss, a loss of young minds and youthful voices and souring spirits lost senselessly and thoughtlessly," Romney said. "We turn to a power greater than our own to understand purpose and if not to understand at least to be able to soothe the wounds of those who have been so seriously hurt."