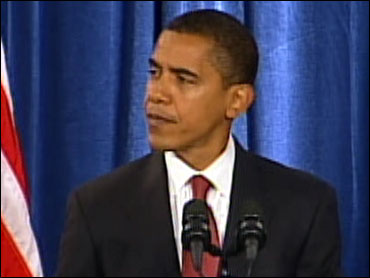 An economic crisis, rising joblessness and a credit squeeze can make a president-elect refine his words. Today's word is "repeal."

During his presidential campaign, Barack Obama promised to repeal President George W. Bush's tax cuts for the wealthy ahead of their scheduled expiration in 2011. It was part of how Obama would pay for an overall net tax cut aimed at low- and middle-income taxpayers, and an effort to bring what he called "fairness" to the tax system.

No one is talking tax hikes now.

Over the weekend, Obama said he has charged his new economic team with devising a plan that would create or preserve 2.5 million jobs over two years. He said the plan would include broad spending plans as well as the middle- and low-income tax cuts he described during the campaign.

Aides later said the plan would not include any of the tax increases Obama, as a candidate, had said he would impose on taxpayers who make more than $250,000.

Asked Monday when those hikes might go into effect, Obama said, "Whether that's done through repeal, or whether that's done because the Bush tax cuts are not renewed, is something that my economic team will be providing me a recommendation on."

If repealed early, Obama's tax increase on the rich would have generated significant revenue, but not enough to compensate for the cost of his tax cuts. An analysis by the Tax Policy Center, based on January 2008 income projections, estimated that the increases would result in about $43 billion in revenue in 2009 and $45 billion in 2010. Those numbers would be smaller now, as the economy has lowered expected incomes.

The adviser, speaking on the condition of anonymity because the details were not worked out, said Obama still intends to "restore fairness" to the tax code as part of his long-term policy agenda.