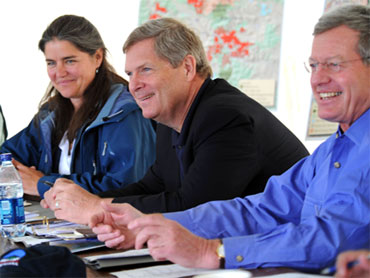 On the edges of a vast landscape that measures in the millions of acres and stretches north through a wilderness area and a scenic national park, ranchers and environmentalists have been able to agree on a lot lately.

The work done to preserve land in northwestern Montana's "Crown of the Continent" was made the shining example Tuesday of what the Obama Administration hopes to achieve with its new "America's Great Outdoors Initiative."

The conservation effort has focused on voluntary land sales of 310,000 acres from a large timber company, deals to retire mining and oil projects and conservation agreements with ranchers and land owners in developing homemade plans for a working landscape in the heart of the Rocky Mountains.

The varied interests behind the effort also agree the Obama Administration should make sure its new initiative doesn't force land conservation ideas from big cities down the throats of rural residents.

"Urban-based conservation movements have really only succeeded in alienating the very best allies: our ranchers, our loggers, our sportsmen and our farmers," said Melanie Parker, who lives in the scenic Swan Valley and has played an integral role in getting loggers and environmentalists in the area to talk with one another.

The administration assured all involved that its initiative will rely on the local ideas gathered in a nationwide listening tour launched Tuesday and Wednesday in Montana.

"The first message, clearly, is that this effort must be bottom up," said Agriculture Secretary Tom Vilsack. "Far be it from me, from Iowa or Washington D.C. or wherever I come from, to suggest I know better."

Montana is a state, like many in the West, where federal land management and conservation are often hotly debated and can lead to long-lasting policy stalemates.

President Barack Obama expects that the multi-agency listening sessions around the country will result in a report delivered to him by November, Vilsack said. The next event will be in Los Angeles in the coming weeks, following sessions Wednesday in Missoula, Bozeman and Helena.

Watershed preservation efforts from the Great Lakes to Chesapeake Bay will also be covered, Vilsack said. The goal is to include everything from recreation to economic development, particularly for rural areas where incomes languish compared to most urban areas.

In Montana, the administration officials were joined by the state's governor and U.S. senators. They highlighted the decade-long conservation effort around The Bob Marshall Wilderness Area and Glacier National Park that has involved longtime foes in land use battles.

Enhancing wildlife habitat was a main goal, but so was improving the local economy with ways to make sure a working landscape became a sustainable timber source for planned biomass energy production.

State and federal money was secured, but only after it was clear the effort had widespread local support after years of hammering out complex deals.

The administration's new initiative comes as Republicans and others criticize the contents of an internal Interior Department memo and other records that show the administration was considering the potential for presidential monument declarations in nine western states. Those declarations, last done in Montana under former President Bill Clinton, remain a very sore point for some westerners.

Leading Democrats said the monument declarations are not part of the agenda.

"I am opposed to the administration creating monuments," said Sen. Max Baucus, D-Mont., who holds an influential role in the Senate. "This is bottom up, that was top down."