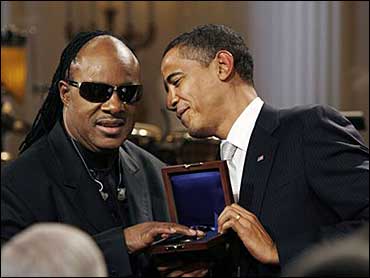 The White House is the place to be on Wednesdays.

Since the presidency changed political hands less than six weeks ago, a burst of entertaining has taken hold of the iconic, white-columned home of America's head of state. Much of it comes on Wednesdays.

The stately East Room, where portraits of George and Martha Washington adorn the walls, was transformed into a concert hall as President Barack Obama presented Stevie Wonder with the nation's highest award for pop music on Wednesday.

A week before that, it was the foot-stomping sounds of Sweet Honey in the Rock, a female a cappella group, that filled the East Room for a Black History Month program that first lady Michelle Obama held for nearly 200 sixth- and seventh-graders from around the District of Columbia.

Cocktails were sipped during at least three such receptions to date, all held on Wednesdays.

Bookending the midweek activity were a Super Bowl watch party for select Democratic and Republican lawmakers and a dinner for governors, the new administration's first black-tie affair. It was capped with a performance by the 1970's pop group Earth, Wind & Fire, and a conga line.

The flurry of entertaining is in keeping with the promise by the Obamas to make the White House a more open place for everyone.

The governors' dinner was "a great kickoff of what we hope will be an atmosphere here in the White House that is welcoming and that reminds everybody that this is the people's house," Obama told the state chief executives after they had dined on Maryland crab, Wagyu beef, Nantucket scallops and citrus salad.

"We are just temporary occupants. This is a place that belongs to the American people and we want to make sure that everybody understands it's open," he said.

At the dinner in the State Dining Room, the Obamas looked comfortable, chatting and smiling with their guests. Afterward, they escorted the governors down the hall to the East Room, which had been arranged with few tables and chairs to encourage dancing to "September," "Boogie Wonderland" and other hits from a musical group Obama listened to growing up.

The conga line formed after the media were escorted out and, apparently, after Obama had called it a night.

"Thank you also for waiting until I had left before you started the conga line," the president told the governors the next morning. "I hear it was quite a spectacle."

Some Obama guests say he immediately puts them at ease. He indulges them and serves cookies, too.

"People like me felt comfortable in his presence," said Rep. Mike Honda, D-Calif., a self-described "poor country boy" who said he felt like a "freshman going to the senior prom" when he attended a White House reception for leaders of the congressional caucuses.

"He's down to earth and engaging," Honda said.

Rep. Trent Franks, R-Ariz., was among those invited for the Super Bowl. He said Obama, an avid sports fan, joined his guests for most of the game between the Arizona Cardinals and Pittsburgh Steelers.

"It wasn't a circumstance where he came in and said 'Hi' and then left," Franks said. "He actually stayed and watched the game."

Sen. Amy Klobuchar, D-Minn, said Obama was very cordial, and he and the first lady made everyone feel comfortable. The president talked to everyone before the game started, she said, including a 12-year-old boy who asked Obama where the bathroom was.

"My favorite part was when he personally served us cookies oatmeal raisin when we were watching the game," she said.

The gathering over hot dogs and hamburgers was one of several get-to-know-the-members-of Congress events Obama held as he lobbied lawmakers to support the nearly $800 billion tax-and-spend economic package he recently signed into law. His efforts produced no Republican votes in the House and just three in the Senate, but Franks said he still appreciated the Democratic president's efforts to reach out to the opposing party.

"I think the value of social interaction like this is not so much that it co-opts anyone in any way. It certainly didn't in my case," said Franks, who said he had a substantive conversation with Obama at the party, "I think it humanizes and personalizes opponents. We can diminish politics and try to work together for what's right for the country."

Obama played the role of "first fan" at the Wonder tribute, where he opened up about his and his wife's common enjoyment of Wonder's music.

"As Stevie knows, I'm a huge fan. And he has been a great supporter," Obama said before presenting the award-winning, singer-songwriter with the Gershwin Prize for Popular Song from the Library of Congress.

He said Wonder's songs "became the soundtrack of my youth" and that in them he "found peace and inspiration, especially in difficult times."

Obama presented the medal to Wonder, then wrapped the singer in a bear hug. As the media were led out of the room, Wonder struck up "Signed, Sealed, Delivered I'm Yours," which was a staple of Obama's campaign rallies.