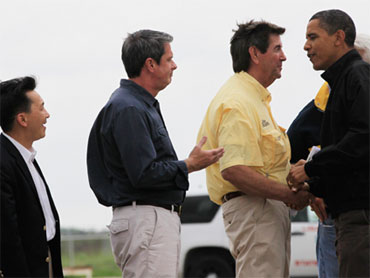 On his third personal trek to the Gulf disaster, President Obama said Friday he sees some progress in fighting the enormous oil spill but it's "way too early to be optimistic" about BP's latest control effort.

Aiming to demonstrate command and personal engagement on day 45 of the catastrophe, Mr. Obama criticized the British oil giant for spending money on advertising and paying dividends to shareholders in the midst of crisis.

The president spoke after arriving at the New Orleans airport for his third inspection tour, and his second in eight days, with national frustration boiling over. Mr. Obama indicated he felt it, too, along with residents of the Gulf and the rest of the country.

"This has been a disaster for this region, and people are understandably frightened and concerned about what the next few months and the next few years may hold," Mr. Obama said after attending a briefing with Coast Guard Adm. Thad Allen, the chief federal official for the spill response, and the governors of Louisiana, Florida and Alabama, along with other officials.

He then headed for Grand Isle, La., a small barrier island, to hear from people whose livelihoods are threatened by the spill — the shrimpers, oyster fishermen, shop keepers and hotel workers so dependent on a thriving Gulf. A driving rain forced him to drop plans to travel by helicopter and instead make a 2½ hour drive south to the coast.

Along the way, the president's motorcade passed a small clutch of people standing alongside the road waving a cardboard sign that said: "HELP US NOW!!"

At another spot, the side of a building had been adorned with a portrait of Mr. Obama reminiscent of posters of him during his presidential campaign. Instead of "hope" or "change," the words "what now?" were painted on his forehead. Next to that, a painting of the grim reaper carried the BP logo and the words "You killed our Gulf — our way of life."

The president's visit came as engineers with BP worked to settle a funnel-like cap over the deep-sea leak to try to collect some of the crude now fouling four states. It was not clear how much oil was being captured, and some continued to flow, generating frightening photos of seabirds clogged in the muck.

Underscoring the mounting political implications, Mr. Obama abruptly canceled plans for his trip to Indonesia and Australia later this month. Ahead of the Gulf visit, he declared himself furious at a situation that "is imperiling an entire way of life and an entire region for potentially years." He criticized BP for not responding more quickly.

But polls show the public growing more negative toward the president's own handling of the spill, and he was aiming to demonstrate he was staying on top of the situation Friday — without getting in the way. Mr. Obama visited the Gulf region twice in May, and this tour surely will not be his last.

"You never want to take resources away from the response and recovery efforts, so we're certainly mindful of that," said spokesman Robert Gibbs. "At the same time ... I think he'll go as often as he thinks that is productive in aiding those response efforts."

Somewhere between 22 million and 47 million gallons of crude oil have been disgorged into the Gulf since the Deepwater Horizon oil rig exploded on April 20, according to government estimates. Eleven workers were killed in the blast.

Mr. Obama told CNN's Larry King on Thursday he was furious that "someone didn't think through the consequences of their actions," and he tried to deflect criticism that he hasn't shown enough emotion about the epic dimensions of the problem.

"I would love to just spend a lot of my time venting and yelling at people," the president said, "but that's not the job I was hired to do. My job is to solve this problem."

Mr. Obama's administration on Thursday handed BP a $69 million bill for recovery costs to date — a figure sure to grow in the weeks and months ahead.