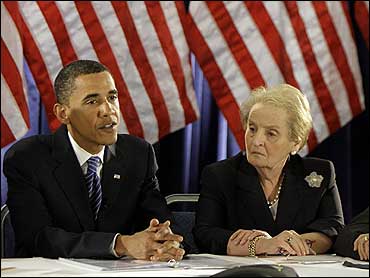 Democratic White House hopeful Barack Obama, looking to chart a U.S. foreign policy course far removed from the Bush administration's path, said he would bring Osama bin Laden to justice in a way that would deny the al Qaeda leader the chance to become a martyr.

Obama's comments Wednesday, following a meeting with his new team of national security advisers, marked another push by the first-term Illinois senator to battle criticism by presidential rival John McCain and other Republicans that he lacked the national security expertise needed to become president. McCain has highlighted his own experience as a longtime senator and former prisoner-of-war in Vietnam.

McCain on Wednesday focused his attention on tackling the surging gasoline prices that have become a key concern among Americans already worried about the country's economic woes.

The presumptive Republican nominee, who a day earlier had proposed opening U.S. offshore regions to oil and gas exploration, on Wednesday pitched a plan to build 45 new nuclear reactors by 2030 - another in his calls for lesser dependence on foreign oil imports.

Meanwhile, Obama told reporters Wednesday that if bin Laden were found during his watch, he would bring him to justice in a way that wouldn't allow the terrorist mastermind to become a martyr, but he may be killed if the U.S. government finds him.

"First of all, I think there is an executive order out on Osama bin Laden's head," Obama said at a news conference. "And if I'm president, and we have the opportunity to capture him, we may not be able to capture him alive."

Obama's campaign said he was referring to a classified Memorandum of Notification that President Bill Clinton approved in 1998 - revealed in the 9/11 Commission report - that would allow the CIA to kill bin Laden if capture were not feasible.

He said he would not discuss what approach he would take to bring bin Laden to justice. But he said the Nuremberg trials for the prosecution of Nazi leaders are an inspiration because the victors acted to advance universal principles and set a tone for the creation of an international order.

"What would be important would be for us to do it in a way that allows the entire world to understand the murderous acts that he's engaged in and not to make him into a martyr, and to assure that the United States government is abiding by basic conventions that would strengthen our hand in the broader battle against terrorism," Obama said.

Obama was questioned about bin Laden after he met with a new team of national security advisers. The 13-member group includes Clinton cabinet members such as former Secretaries of State Madeleine Albright and Warren Christopher and former Defense Secretary William Perry.

The meeting came after rival John McCain's campaign said Obama had a pre-9/11 mind-set for promoting trial of terrorists. Obama's rebuke was sharp.

"Osama bin Laden and his top leadership - the people who murdered 3,000 Americans - have a safe-haven in northwest Pakistan, where they operate with such freedom of action that they can still put out hate-filled audiotapes to the outside world," Obama said. "That's the result of the Bush-McCain approach to the war on terrorism."

McCain spokesman Tucker Bounds responded that Obama offers weak leadership and a partisan approach to terrorism. He noted that Obama opposed the decision to send additional troops to Iraq and has not visited the country in more than two years.

At a fundraising dinner in Washington, President George W. Bush on Wednesday said McCain is the only candidate in the race who can face tough decisions and "will not flinch," in the president's most extended public support yet to his former Republican rival.

McCain on Wednesday was in Missouri, campaigning for a third straight day on the energy issue. He called for the construction of 45 new nuclear reactors by 2030 and pledged $2 billion a year in federal funds "to make clean coal a reality," measures designed to reduce dependence on foreign oil.

McCain said the 104 nuclear reactors currently operating around the country produce about 20 percent of the nation's annual electricity needs.

"Every year, these reactors alone spare the atmosphere from the equivalent of nearly all auto emissions in America. Yet for all these benefits, we have not broken ground on a single nuclear plant in over thirty years," he said.

He said he would set the country on a course to build 45 new ones by 2030, with a longer-term goal of adding another 55 in the future.

Later, at a news conference, McCain said he favors steps to reduce the time plant owners need to obtain the necessary permits. He also suggested U.S. companies use common technology to shave the time it takes to bring a new nuclear facility on line. He also said a decision by President Jimmy Carter three decades ago not to pursue fuel reprocessing technology should be reversed.

McCain's motorcade drove by a few dozen sign-carrying demonstrators protesting the Iraq War. One audience member interrupted his remarks by standing and shouting that the Arizona senator had taken millions from the oil industry.

Separately on Wednesday, union leaders said the AFL-CIO labor federation will endorse Obama within weeks. The announcement, which followed a meeting between Obama and with the AFL-CIO's leadership, could help Obama with blue-collar workers and union members in industrial states such as Pennsylvania, Ohio and Michigan.