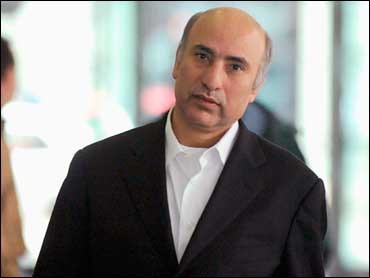 Antoin "Tony" Rezko, 52, who according to witnesses wielded wide powers within the Blagojevich administration and now faces a stiff prison sentence, was immediately taken into custody following the verdict.

U.S. Attorney Patrick J. Fitzgerald told reporters the verdict represented "an antidote to the poison of corruption" that trial testimony alleged included the fixing of state boards that controlled a $40 billion pension fund and made major decisions about hospital construction.

Political corruption in Illinois has been deemed so extensive that the FBI has sent an extra official corruption squad into the state. Federal officials say the investigation is far from over.

"If morals don't get to them, I hope the fear of going to jail does," Fitzgerald told reporters.

Rezko's conviction also intensifies the spotlight on his relationship with Obama, whom Rezko has known since he entered politics, raised money for his Illinois campaigns and was involved in a 2005 real estate deal with him. Obama has donated $150,000 in Rezko-related contributions to charity.

The presumptive Democratic presidential nominee is accused of no wrongdoing and his name was barely mentioned at trial, but Republicans are unlikely to let voters forget about his ties to Rezko as the presidential race heats up.

Obama issued a statement saying he was "saddened," adding, "This isn't the Tony Rezko I knew, but now he has been convicted by a jury on multiple charges that once again shine a spotlight on the need for reform."

Blagojevich also was not accused of wrongdoing but his reputation received a serious battering by the testimony that emerged. The state legislature has been discussing impeachment and a wide open Democratic primary in 2010 is likely.

One witness said the governor discussed a state payroll job for a campaign contributor with a $25,000 donation lying on the table. Another said Blagojevich spoke of big-money state contracts for those who helped him advance his political career — possibly as a presidential candidate.

A money management executive who wanted to invest state pension assets said he was told to sign a contract promising to pay a $800,000 fee to a consultant he had never heard of based in the Turks & Caicos Islands.

"That's the way the governor handles patronage here," he quoted a Chicago attorney who pressed him to sign the contract as saying.

Blagojevich has repeatedly denied taking part in any of the shadowy political dealings that were described from the witness stand. On Wednesday, he read a prepared statement to reporters in which he called Rezko "a friend" who "was a supporter."

"On a personal level I am deeply sad for what's happened to Tony," Blagojevich said. "The jury's decision is yet another reminder that ours is a system of government that is ruled by laws and not by men. I respect the decision of the jury."

The jury acquitted him of three counts of wire fraud, four counts of aiding and abetting bribery and one count of attempted extortion.

His conviction was a stunning victory for federal prosecutors who accused him of plotting with admitted political fixer Stuart Levine to squeeze payoffs out of money management firms that sought to invest the assets of the $40 billion state Teachers Retirement System.

Rezko also was charged in the 24-count indictment with plotting with Levine to get a $1.5 million bribe from a contractor who sought state approval to build a hospital in the McHenry County suburb of Crystal Lake.

Levine pleaded guilty to the charges and became the government's star witness in hopes of getting a relatively lenient 5½-year sentence.

Clad in a sharply tailored tan suit, Rezko showed no emotion as St. Eve read the verdict. He smiled slightly at well wishers and waved as U.S. Marshal Kim Widup and a crew of deputies escorted him to the lockup.

Rezko, who has dual U.S. and Syrian nationality, had been free on $8 million bond pending the trial's conclusion.

"Mr. Rezko, on his own, decided that if he was convicted he wanted to immediately start serving his sentence," said defense attorney Joseph Duffy, who added that he would pursue an appeal.

Levine was a bizarre witness by any yardstick. He freely admitted to years of attending marathon drug parties in a suburban hotel with male companions and taking large doses of cocaine, crystal methamphetamine, kaetamine, and other drugs, frequently washed down with shots of vodka.

Jurors who met briefly with reporters following the verdict said that they realized Levine was not the most reliable witness.

"He played with us in the courtroom also," said Andrea Coleman. But another juror, Mona Lisa Mauricette, said his testimony seemed to fit in with tapes of phone conversations made secretly by the FBI.

"We weren't going only on Levine's testimony," Mauricette said.

The jurors laughed and declined to comment when one reporter asked if they had realized how corrupt Illinois politics can be before the trial. They also said Blagojevich's role in the case had no influence on them.