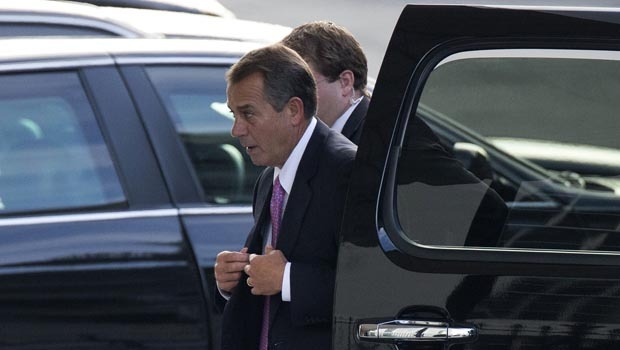 President Obama and congressional leaders met for just over an hour this afternoon to work on a deal to avert the "fiscal cliff" in a meeting that was described as "constructive and candid."

The aide said that, in the meeting, Reid and McConnell said they will continue trying to work out a deal. The aide also confirmed that Boehner said he will not move until the Senate acts first.

He explained, "I think the next 24 hours will be very instructive as to what we're able to accomplish," adding, "There's no concrete proposal at this time. We have a number of different directions we're going to try to take and we're going to see what can be worked out."

McConnell, speaking on the Senate floor after the meeting, expressed his hope "that we can come forward as early as Sunday and have a recommendation that I can make to my conference," adding that he is "hopeful and optimistic."Reid said, "We had a long meeting in the White House. It was very constructive. We hope that will bear fruit, but that is what we hoped a lot."

A source familiar with the White House meeting tells CBS News Chief White House Correspondent Major Garrett that the chief sticking point is the income threshold beyond which tax cuts will expire. The president pushed for the threshold to be $250,000, but Republicans balked.

The White House has announced that the president will deliver a statement at 5:45 p.m. ET to discuss what happened at the meeting.

This afternoon's last-ditch "fiscal cliff" meeting between President Obama and congressional leaders was expected to include discussion of one final proposal form the president, CBS News has learned.

It reportedly would look very similar to what the president proposed before talks broke down between the White House and Boehner, though to move the talks forward rapidly, considering it's less than four days before the "cliff" hits, he might throw in some sweeteners for Republicans, potentially an entitlement cut such as "chained" consumer price index (CPI) for Social Security, which would measure inflation at a different rate, resulting in lower Social Security payments for recipients.

Before Mr. Obama and Boehner cut their talks off prior to Christmas, they were seemingly closing in on a deal, with the president offering $1.2 trillion in tax revenues and $800 billion in spending cuts to Boehner's $1 trillion of each. Also, Boehner had proposed letting the Bush-era tax cuts expire for those making $1 million or more; Mr. Obama had offered changing the top threshold to $400,000, as opposed to the current $250,000 threshold.

The crucial issue in today's meeting was the tax threshold, Garrett reports. Mr. Obama will stick to the Democrats' idea of letting the cuts expire on those making over $250,000 and ask for an extension on unemployment benefits, which expire tomorrow, an official familiar with the meeting told Garrett. Boehner and McConnell are united in opposition to the $250,000 threshold and nothing will move if Mr. Obama holds firm with his party on letting the tax rates expire on that level of income.

However, Garrett reports, McConnell is ready to deal and has Republican support to strike a deal in the $500,000 range or slightly higher.

Also, there are side discussions to include a variety of "patches" for the Alternative Minimum Tax, the doc fix (Medicare reimbursement rates shrink by 27 percent on Jan. 1) and jobless benefits, which expire tomorrow.

If the Republicans can budge Obama up to $500,000, a small tax deal with the side fixes may be doable. Republicans say it's all up to Obama's flexibility; the White House says it's all up to the GOP to guarantee up or down votes.