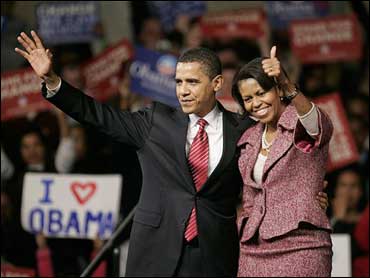 Obama achieved the biggest margin of victory yet in a Democratic primary contest. His victory over Clinton and Edwards came after a racially charged battle that served as a prelude to the Feb. 5 coast-to-coast competition for more than 1,600 national convention delegates.

With all precincts reporting, Obama had 55 percent of the vote, more than doubling Clinton, who came in at 27 percent. Edwards, who was born in South Carolina, finished with 18 percent support. Obama also gained 25 convention delegates, Clinton won 12 and Edwards eight.

In Nashville, Tennessee, Clinton congratulated Obama and put the focus on upcoming contests. "Now the eyes of the country turn to Tennessee and the other states that will be voting on Feb 5th," she said.

Edwards vowed to stay in the race after another disappointing finish, saying he would ``give voice to all those whose voices aren't being heard.'' (

With 99 percent of precincts reporting, more than 532,000 votes had been tabulated. The record-breaking returns easily eclipsed the 280,000 people who voted in the Democratic primary in 2004.

All three contenders campaigned in the state on primary day, but only Obama and Edwards spoke to South Carolina supporters after the polls closed. Clinton decided to fly to Tennessee, one of 22 states holding Democratic primaries and caucuses on Feb. 5.

The South Carolina primary marked the end of the first phase of the campaign for the presidential nomination, a series of single-state contests that winnowed the field and conferred co-front-runner status on Clinton and Obama, but had relatively few delegates at stake. That all changes in 10 days' time, when New York, Illinois and California are among the states holding contests in a virtual nationwide primary.

The victory was Obama's first since he won the kickoff Iowa caucuses on Jan. 3. Clinton, a New York senator and former first lady, scored an upset in the New Hampshire primary a few days later. They split the Nevada caucuses, she winning the turnout race, he gaining a one-delegate margin. Clinton hopes to become the first woman to occupy the White House, and Obama is the strongest black contender in history.

After playing a muted role in the earlier contests, the issue of race dominated an incendiary week that included a shift in strategy for Obama, a remarkably bitter debate and fresh scrutiny of the former president role in his wife's campaign.

"By injecting himself into the Democratic primary campaign with a series of inflammatory and negative statements, Bill Clinton may have helped his wife's presidential hopes in the long term but at the cost of his reputation with a group of voters that have long been one of his strongest bases of political support," wrote CBSNews.com senior political editor Vaughn Ververs. (Read Ververs' full analysis.)