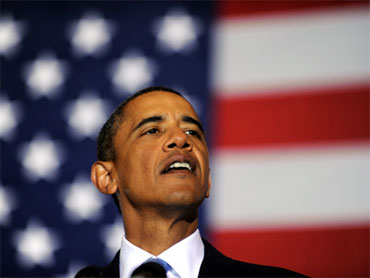 Admonishing his own party, President Barack Obama says it would be "inexcusable" and "irresponsible" for unenthusiastic Democratic voters to sit out the midterm elections, warning that the consequences could be a squandered agenda for years.

"People need to shake off this lethargy. People need to buck up," Mr. Obama told Rolling Stone in an interview to be published Friday. The president told Democrats that making change happen is hard and "if people now want to take their ball and go home, that tells me folks weren't serious in the first place."

The midterm elections are in five weeks and polling shows that Republicans, out of power at the White House and on Capitol Hill, have a much more excited base of supporters than Democrats. Mr. Obama, campaigning this week in four states, is in a sprint to restore the voter passion that helped him win office.

Yet in his attempt to light a fire under supporters, Mr. Obama comes across as fired up himself about how many backers fail to acknowledge the progress he sees. He said the glass-half-empty view among many progressive voters can be a debilitating force that distracts them from the real worry: Republicans.

The GOP is poised to win seats in the House, if not control of the chamber, and gain ground in the Senate, too.

"It is inexcusable for any Democrat or progressive right now to stand on the sidelines in this midterm election," Mr. Obama said.

The president has been telling Democrats to "wake up" and recognize that he and the Democratic-run Congress have delivered on promises, from a new health care law to tougher rules for Wall Street to more aid for college students. Mr. Obama wants disenchanted supporters to see that Republican wins in November would undermine the ability of Democrats to get the unfinished business done, from climate change legislation to allowing gays to serve openly in the military.

What emerges in the magazine story is a stern, lecturing tone from Mr. Obama.

It comes mainly at the end of the interview. Mr. Obama had wrapped the lengthy Q-and-A session, according to the magazine, but then returned unprompted to make one more impassioned point and unleash on the enthusiasm gap. He portrayed a clear choice between an administration that despite some warts has helped advance its agenda, and a Republican Party that would offer disastrous policies for the economy and civil liberties.

"The idea that we've got a lack of enthusiasm in the Democratic base, that people are sitting on their hands complaining, is just irresponsible," he said in the interview. He said Democrats should be thinking about what's at stake this election "if they want to move forward over the next two years or six years or 10 years."

The Rolling Stone interview was conducted Sept. 17. The Associated Press obtained a copy of the story, titled "Obama Fights Back."

Mr. Obama expresses plenty of disappointment over how Republicans made a tactical decision from the start to oppose him, but also offers some "grudging admiration" for its political effectiveness in keeping the GOP united. He said the resulting slog between Republicans and himself - legislative delays and political fighting reminiscent of the Washington he ran against - has worsened public skepticism of government and eroded the feeling of hope that surrounded his election.

The president said he keeps a checklist of his campaign promises and that he has met, by his account, about 70 percent of them.

As for the rest: "Well, that's what the next two years is for, or maybe the next six."

Mr. Obama would need to win re-election in 2012 for that latter timeframe to occur.

On Tuesday, Mr. Obama will begin a two-day trek through four states starting with in Albuquerque for the first of three backyard meetings with voters this week. He has recently embraced this form of intimate-but-televised event to defend and explain his record on the economy, health care and other topics.

Later tonight, Mr. Obama will headline a rally at the University of Wisconsin in Madison, where he hopes to replicate the raucous, youthful, big-stage events for which he became famous in the 2008 presidential campaign. Democrats will host hundreds of "watch parties" nationwide, and Mr. Obama will hold other campus rallies before Nov. 2 to warn young voters that the "hope and change" they embraced two years ago is at risk if Republicans sweep these midterm elections.

Democratic Party Chairman Timothy Kaine, however, sees no slight in Feingold skipping the campaign rally where Mr. Obama is appearing on his behalf.

Kaine told CBS's "The Early Show" that candidates "make their own decisions about these things." And Kaine, a former Virginia governor, says Feingold understands that Mr. Obama can energize the party's base.