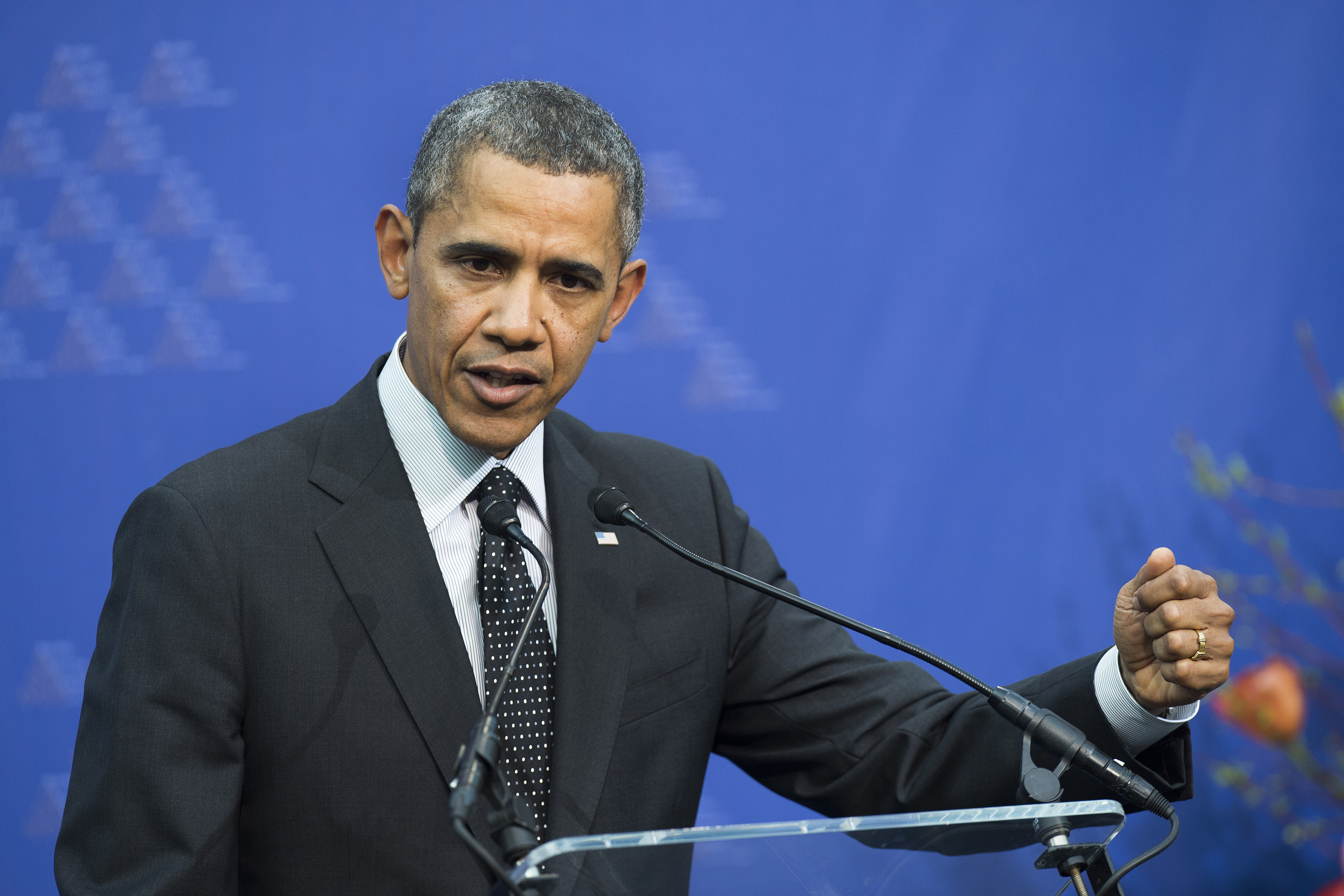 Before departing the Nuclear Security Summit in the Netherlands Tuesday, President Obama defended his handling of the crisis in Ukraine against criticism that he has misread Russian President Vladimir Putin's intentions or Russia's standing in the world.

Though the two-day gathering in the Hague was a forum for dozens of nations to discuss how to improve worldwide nuclear security, it also provided a convenient gathering place for the world's most powerful nations to discuss their response to the Russian annexation of the Crimean peninsula, which is widely viewed as illegitimate by the West. On Monday, the Group of Seven (G-7) nations moved to exclude Russia from international meetings and abandoned plans for a summit in Sochi this June.

Yet Mr. Obama, who has imposed sanctions on Ukrainian and Russian individuals and threatened to target entire sectors of the Russian economy, has faced charges that he has mishandled the situation. Among the chief critics has been 2012 Republican presidential nominee Mitt Romney -- whom Mr. Obama mocked for labeling Russia the number one geopolitical threat to the U.S. during a presidential debate - who said on CBS News' "Face the Nation" last Sunday that the president's "naiveté" emboldened Putin.

"The truth of the matter is that America's got a whole lot of challenges. Russia is a regional power that is threatening some of its immediate neighbors, not out of strength but out of weakness," Mr. Obama said at a press conference Tuesday when asked whether Romney had been correct. "My response then continues to be what I believe today: Russia's actions are a problem. They don't pose the number one national security threat to the United States. I continue to be much more concerned when it comes to our security with the prospect of a nuclear weapon going off in Manhattan."

The president also said in response to a question about whether he misread Putin's motivations that he is "less interested in motivation and more interested in the facts and the principles that not only the United States but the entire international community are looking to uphold."

The U.S. and European Union have relied on sanctions to pressure Russia, looking to avoid any military incursion in the region. At the same time, they continue to urge Russia to resolve the problem with diplomacy and engage in talks with the interim Ukrainian government. Mr. Obama said that Putin "just has to understand that there's a choice to be made here."

There was a small but significant breakthrough on that possibility at the meeting on Monday, when Russian Foreign Minister Sergei Lavrov met with Ukraine's interim foreign minister, Andriy Deshchytsia on the sidelines of the summit. The U.S. had been pushing for the meeting, which was the first on the ministerial level since former President Victor Yanukovych was overthrown - and the first time Russia has recognized the legitimacy of the interim Ukrainian government, after Lavrov refused meetings several times in recent weeks.

But Russian troops have amassed on the eastern border of Ukraine, prompting fears of a further incursion, and Ukraine finally pulled its remaining troops back from Crimea Monday after days of Russian troops forcing them out of military facilities there.

Though Mr. Obama and the international community have maintained they do not recognize Russia's annexation of Crimea, Mr. Obama conceded Monday that the Russian military controls the peninsula and that it would be "dishonest" to suggest the situation could be resolved easily.

Of the troops on the Ukrainian border, the president noted the troops so far have remained on Russian soil.

"We oppose what appears to be an effort at intimidation but Russia has a right legally to have its troops on its own soil," he said.

Meanwhile, Congress continued to work on a legislative response to the crisis. Though the House and Senate have taken virtually identical approaches toward offering a $1 billion loan guarantee for Ukraine and imposing sanctions on Russian officials, they were split on whether the legislation should contain reforms to the International Monetary Fund (IMF) sought by the administration.

Republicans largely say no, though at least some GOP members of the Senate seemed ready to include them in order to move legislation. But in the face of staunch opposition from the House and some Senate Republicans, Senate Majority Leader Harry Reid, D-Nev., said Tuesday that the Senate would drop the IMF provisions in order to move the legislation forward sometime Tuesday or Wednesday, following the lead of Secretary of State John Kerry who has pushed for aid to come quickly.

Even House Democrats had expressed frustration that Senate Democrats are trying to include the IMF reforms in the legislation. The most senior Democrat on the House Foreign Affairs Committee, Rep. Eliot Engel, D-N.Y., told Foreign Policy that the internal debate "makes us look silly and weak."

Senate Minority Leader Mitch McConnell, R-Ky., said Tuesday that the Senate bill "cannot pass the House or become law in its current form." He pushed for amendments to remove the IMF provisions.

"This simply cannot be a take it or leave it situation. That's just nonsensical," McConnell said.

He also accused Majority Leader Harry Reid, D-Nev., of trying to "blow up the process" by blaming Republicans for delaying the bill before the Congressional recess by seeking an amendment that would delay an IRS rule.

"What they're trying to do here is bring unrelated items into this debate. All it's going to do is slow the whole process down," Boehner said.