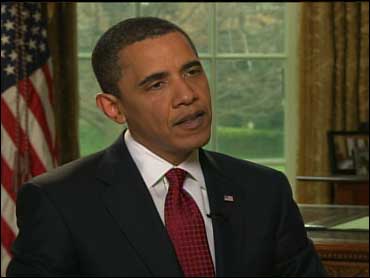 (CBS)
Though he does not believe violence along the U.S. Mexico border poses an "existential threat" to Americans, President Obama says he is considering deploying U.S. troops to the border area.

"Obviously there have been calls to increase National Guard troops on the borders," Mr. Obama noted in an interview with Bob Schieffer on CBS News' Face the Nation Sunday.

"That's something that we are considering," he said. "But we wanna first see whether some of the steps that we've taken can help quell some of the violence."

The president said it is essential to continue consulting with the Mexican government.

Mr. Obama also echoed the perspective of Secretary of State Hillary Clinton, saying, "We've gotta reduce demand for drugs. We've got to do our part in reducing the flow of cash and guns south.

The president said violence along the border poses a serious threat to border communities and has "gotten out of hand." Schieffer asked if he would consider asking Congress to alter the assault weapon ban in order to combat the number of guns coming across the border into Mexico.

"I think the main thing we need is better enforcement," the president said. "And so this week we put forward a comprehensive initiative to assist those border regions that are being threatened by these drug cartel to provide assistance to the Mexican government to make sure that on our side of the border we've got more personnel, more surveillance equipment."

"Oftentimes that causes even more violence," he said of such efforts. "And we're seeing that flare up."