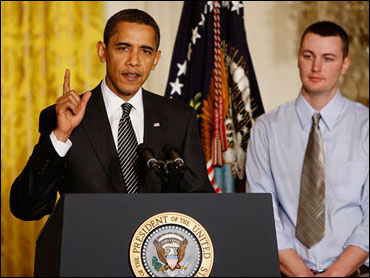 President Barack Obama says the clear consensus from the White House health care summit is an immediate need for reform.

Wrapping up the nearly daylong session, Obama said the participants - doctors, lawmakers, insurers, even skeptics - were universal in agreement that the need for health care reform "is here and now."

The president said the White House would be convening a series of meetings on health care matters in the coming weeks. He said today's sessions had been extraordinarily productive.

"I just want to make sure that I don't get in the way of all of you moving aggressively and rapidly," he told attendees.

"There is a moral component to this that we can't leave behind," he said. "However, if we don't address cost, I don't care how heartfelt our efforts our, we will not get this done."

"We've got to balance heart and head as we move this process forward," he added.

Mr. Obama entered the forum's question and answer session with Sen. Edward Kennedy of Massachusetts, who is battling a brain tumor. After brief remarks summarizing the participants' observations, Obama called on Kennedy. The veteran Democratic senator said he looked forward to being a foot soldier in the push for health care reform and said: "this time we will not fail." (More on Kennedy's appearance.)

The president quoted Sen. Sheldon Whitehouse on the health care issue, saying, in a reference to the film "Thelma and Louise," "We're in the car headed toward the cliff and we must act."

At another moment in the question and answer session, the president cut off House Ways and Means Committee Chairman Charlie Rangel when Rangel began speaking after Mr. Obama asked him if his Republican counterpart on the committee was in the room.

"Well what I meant, Charlie, was let's give him the mic," the president quipped, to laughter from the crowd. (Read more.)

Earlier, the president opened the forum with the declaration that "the status quo is the one option that is not on the table."

The session and meetings to follow around the country show the new president's push for expanded health insurance will be more open and inclusive than the Clinton administration's failed attempt of 15 years ago.

"In this effort, every voice must be heard. Every idea must be considered. Every option must be on the table. There will be no sacred cows in this discussion," Obama said, calling the issue the greatest threat to the foundation of the U.S. economy. He also issued a warning: "Those who seek to block any reform at any cost will not prevail this time around."

The president added that in looking for solutions, "we can no longer let the perfect be the enemy of the essential." (Read the president's opening remarks in full.)

The U.S. system is the world's costliest and leaves an estimated 48 million people uninsured.

Mr. Obama, unlike President Bill Clinton in the 1990s, is not telling Congress exactly what he wants in a health care bill - only that costs must be contained and that, eventually, there must be quality, affordable health care for all, reports CBS News correspondent Bill Plante.

Clinton promised to veto any health-care measure that didn't give him what he sought.

This time, Obama said, "Each of us must accept that none of us will get everything we want." And, he said, "While everyone has a right to take part in this discussion, no one has the right to take it over."

Obama is setting a rigorous timeline to address the "crushing cost of health care this year, in this administration." His advisers say he's determined to pass legislation in his first year in office, and they say while he hopes for a bipartisan measure, he won't be deterred by ideological fights.

"What better time than now, and what better cause for us to take on," he said.

On Capitol Hill, Democratic leaders in both the House and Senate rallied behind him, saying Thursday that they hoped to have a health care reform measure passed by the end of the summer.

Still, the political reality of reshaping the complex medical system is certain to intervene as the broad discussion about the need for reform gives way to the details. Those may well conflict with the priorities of a host of stakeholders, including patients, doctors, labor unions, drug companies, businesses and employers, insurers and lawmakers up for re-election next year.

At the same time, there's also a fundamental fault line between Democrats and Republicans over the role of government in the health care system.

Senate Republican leader Mitch McConnell of Kentucky released a letter to Mr. Obama, saying his party is ready to work with the administration on health care, but warning that reforms should not lead to a government-run system, and must balance coverage expansions with curbs on costs.

The criticism was harsher from some other Republicans.

"We're going to wind up with less choice, less patient control and, at the end of the day, we're going to do what government's always do and we're going to ration care," Rep. John Shadegg, R-AZ, told CBS News.

For now, Obama is seeking to use his popularity as a new president and the public's high level of frustration with medical costs to get something done on the thorny issue without making the same mistakes as the last Democratic president.

In hindsight, both supporters and opponents agree that Clinton made a series of missteps and miscalculations that doomed his plan from the outset.

With first lady Hillary Rodham Clinton leading the charge, the measure was written by the White House with little input from lawmakers or interest groups. Stakeholders of all sides complained they were shut out of the process. Clinton's veto threat also limited his room to negotiate.

This time, Obama is making a very public point to consult with people at the start of deliberations.

Hence, more than 120 people from all sectors - and with a wide range of viewpoints - were taking part in the program. They included longtime health reform heavyweights, including the cancer-battling Sen. Edward Kennedy of Massachusetts, and some people who helped kill Clinton's overhaul in the 1990s. (See a full list of forum participants.)

Also unlike Clinton, Obama is planning to send only broad principles to Congress of what he wants to see in the bill, such as increased coverage and controlled costs. The House and Senate will be left to do the heavy lifting. And, Obama is planning to hold a series of health care forums outside of Washington to solicit ideas and drum up support for his plan.