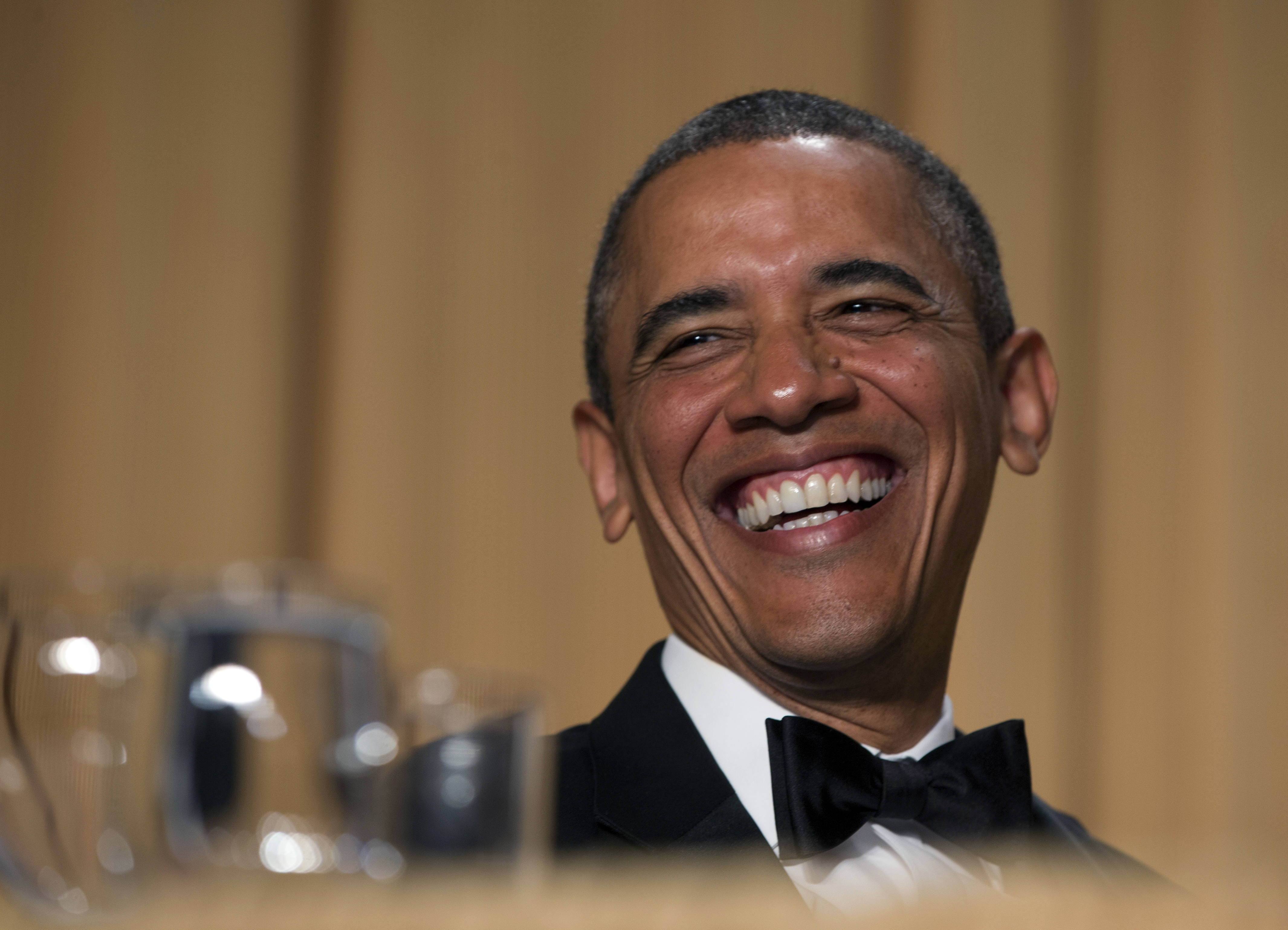 Journalists, celebrities, and political bigwigs converged in Washington, D.C. Saturday night for the 2013 White House Correspondents' Dinner, laughing along as President Obama and comedian Conan O'Brien took the stage to skewer a host of ripe targets in Washington, Hollywood, and beyond.

The president kicked off the roasting with a bit of self-deprecating humor, describing how the presidency has aged him: "I look in the mirror and I have to admit, I'm not the strapping young Muslim socialist that I used to be."

"Time passes, get a little gray, and yet, even after all this time, I still make rookie mistakes," he said. "Like, I'm out in California at a fundraiser, having a nice time, I happen to mention that [California Attorney General] Kamala Harris is the best looking attorney general in the country. As you might imagine, I got in trouble when I got back home. Who knew [U.S. Attorney General] Eric Holder was so sensitive?"

The president also directed a few barbs at the media. "I know CNN has taken some knocks recently," he said, "but I admire their commitment to cover all sides of the story, just in case one of them happens to be accurate."

In the wake of the April 15 bombings at the Boston Marathon, CNN was lambasted for incorrectly reporting that a suspect had been arrested when no such arrest had yet been made.

"The media landscape is changing so rapidly, you can't keep up with it," the president said, "I remember when [popular viral content website] Buzzfeed was just something I did in college around 2 a.m."

Despite his teasing, the president insisted, "I really do respect the press. I recognize that the press and I have different jobs to do. My job is to be president, your job is to keep me humble."

The president also took aim at some of his Republican opponents. "I know Republicans are still sorting out what happened in 2012, but one thing they all agree on is they all need to do a better job of reaching out to minorities," he said.

"And look, call me self-centered, but I can think of one minority they can start with," he said, as he raised his hand. "Think of me as a trial run, you know? See how it goes."

He also poked fun at his recent "charm offensive," which has seen the president wining and dining with GOP lawmakers. "Recently I had dinner...with a number of the Republican senators," he said, "and I'll admit it wasn't easy. I proposed a toast. It died in committee."

Despite that setback, he said, "I am not giving up. In fact, I'm taking my charm offensive on the road. A Texas barbecue with [Sen.] Ted Cruz. A Kentucky bluegrass concert with [Sen.] Rand Paul. And a book burning with [Minnesota Rep.] Michele Bachmann."

He also poked fun at Sen. Marco Rubio, R-Fla., often mentioned as a potential 2016 presidential contender. "The guy has not even finished a single term in the Senate and he thinks he's ready to be president," Mr. Obama said. "Kids these days."

The evening wasn't all levity, however -- the dinner took place in the shadow of tragedy, less than two weeks after two bombs exploded at the Boston Marathon, killing three and injuring over 250, and after a fertilizer plant explosion in Texas killed 14 and injured roughly 200 just two days after the terror in Boston.

President Obama's remarks took a somber turn at their conclusion as he asked the audience to remember the victims of the dual tragedies.

"These have been some very hard days for too many of our citizens. Even as we gather here tonight, our thoughts are not far from the people of Boston and the people of West, Texas. There are families in the Midwest who are coping with some terrible floods," he said. "So we've had some difficult days. But even when the days seem darkest, we have seen humanity shine at its brightest. We've seen first responders and national guardsmen who dashed into danger; law enforcement officers who live their oath to serve and protect; and everyday Americans who are opening their homes and hearts to perfect strangers."

"These men and women should inspire all of us in this room to live up to those same standards, to do our jobs with the same fidelity and the same integrity and the same sense of purpose and the same love of country," the president said. "Because if we're only focused on profits or ratings or polls, then we're contributing to the cynicism that so many people feel right now."

"Those of us in this room tonight, we are incredibly lucky," Mr. Obama remarked. "And the fact is we can do better -- all of us."

The president can be a tough act to follow, but O'Brien rose to the occasion, directing many of his barbs at members of the press rather than political figures.

"As I look around the room and see all the media here tonight, I realize this is just one big high school cafeteria," he said. "Think about it, Fox is the jocks, MSNBC is the nerds, bloggers are the goths, NPR is the table for kids with peanut allergies, Al-Jazeera is the weird foreign exchange student nobody talks to, and print media, I didn't forget you -- you're the poor kid who died sophomore year in a car crash...Cheer up, we dedicate the yearbook to you."

"The print media are here for two very good reasons -- food and shelter," O'Brien continued. "Some people say print media is dying, but I don't believe it. And neither does my blacksmith."

O'Brien also mocked the perpetually tuned-in members of the Washington press corps, some of whom kept their noses in their smart phones even as the dinner was unfolding. "If any of you are live tweeting this event," he said, "please use the hash tag '#incapableoflivinginthemoment'."

Despite his teasing of the press, O'Brien also trained his fire on many of the politicians assembled, gently ribbing the president and his administration but reserving some more savage barbs for Congress.

"When you think about it, the president and I are a lot alike," O'Brien said. "We both went to Harvard, we both have two children, and we both told Joe Biden we didn't have extra tickets to tonight's event."

"President Obama, you had some great jokes," O'Brien continued. "It was a pleasure watching you stand up here and do what I do. So now it's only fair that I get to do what you do. For the next fifteen minutes, I'll be mired in a tense, dysfunctional standoff with Congress"

O'Brien also ridiculed the Republican party, particularly 2012 GOP standard-bearer Mitt Romney. "If in 1995, you had told me that in 2013, we'd have an African-American president with the middle name Hussein who was just reelected to a second term in a sluggish economy," he said, "I would have said, oh, he must have run against Mitt Romney."

O'Brien congratulated the president on his victory but added, "As a late night comedian, I was kind of pulling for the rich guy whose horse danced in the Olympics."

"House Majority Leader Eric Cantor is here," O'Brien continued, "or as I like to refer to him, yet another Jewish Republican from the South."

O'Brien reminded the audience, however, that Republicans aren't the only ones who have drawn criticism for a lack of diversity in their ranks: "Mr. President, your hair is so white, it could be a member of your Cabinet."

"I've made some jokes about the president this evening," he added, "and I'm looking forward to my audit."

At the end of his monologue, O'Brien too paid tribute to the courage and resolve of Bostonians in the wake of the terror attacks that shook the city on April 15. "Some of you may not know this," he said, "I grew up in Boston. My parents still live there, and my brother Luke raised his family in Watertown. And I'd like to take this opportunity to thank you, Mr. President, for visiting that great city and helping it to heal."

The dinner, considered the most star-studded annual gala in Washington, is spearheaded by the White House Correspondents' Association, a group of journalists that negotiates the interaction between the administration and the press corps covering it.

The growing roster of celebrities at the dinner in recent years has drawn criticism from some who have fretted that the focus on star power diminishes the serious work done by politicians and the press, but event organizers have stressed that it's not just an exercise in rubbing elbows and cracking jokes. Each year, the correspondents' association awards thousands of dollars in scholarships to promising would-be students at the dinner. The evening also honors several journalists who have demonstrated particular strength in their coverage of the White House during the previous year.

Since 1968, the Washington Hilton has hosted the party-goers during their annual fete. The event dates back to 1920, and fifteen presidents have attended the dinner since then, beginning with Calvin Coolidge in 1924.